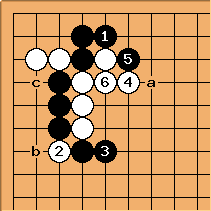 are considered the best continuation, although there is some variation possible, especially for

. After this, Black has to choose whether to save or sacrifice his three stones.

Jonathan Cano: I've created a problem for a non-joseki variation on

, at Large Avalanche Turn Outward Problem. The problem begins with 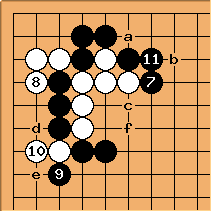 is considered the joseki move. Black allows White to take his three stones and the corner, making influence in return.

accepts this exchange. The sequence to

is the current joseki. In the past is was more common for white to play atari at

, followed by black a, white

, black b. After the joseki, black can exchange c for d to cut white off from the center, but black might prefer to force with e rather than c, and so keeps both in reserve until he knows which is best. 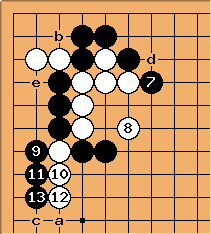 If White does not accept the sacrifice, as seems to be more common nowadays, she jumps out at

at a, black captures the corner stones at b. In this case white does not have an immediate forcing move on either side, so she usually prefers to move the fight to the top as shown in the next diagram. 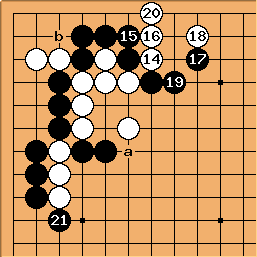 , white tries to get some forcing moves in. Black may accept with

, but is once again more likely to go for a sacrifice with

, the black group at the top is captured, but only in ko, and black has considerable counterplay, starting at

. Note that a is black's sente, so the three white stones have little chance to move out. 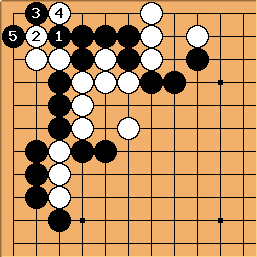 This is the ko that is left in the position. Alternatively, black can use the corner aji to force on either side. 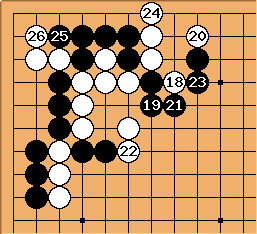 White can also play atari at

before the attachment at

, the fighting obviously continues, but the position has not occurred often enough in professional games for me to discern a joseki. 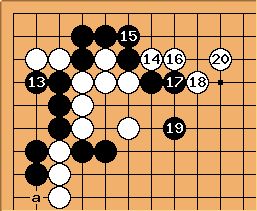 Instead of pushing at a (

in diagram 3), black can also take the corner with this

, and another fight ensues. 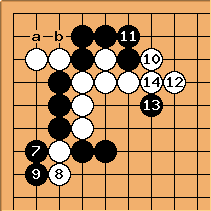 Saving the black stones with

, rather than sacrificing them with a play at

in diagram2), used to be joseki. 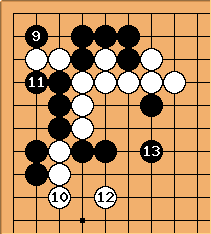 This used to be a popular joseki around 1950. Nowadays the fact that Black has to play two moves (

) to capture the corner is regarded too large a disadvantage. 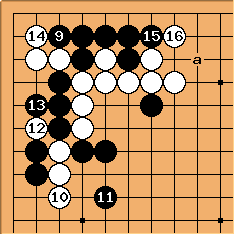 seemed to improve on a black play at

in the previous diagram), allowing Black to take the corner with one move, until the counter-measure of 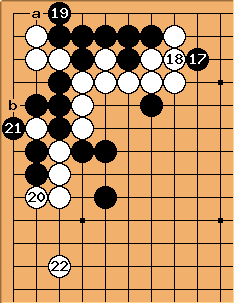 This is considered good for White because Black still has to take the three stones off the board. So Black's territory is rather small, while White has been able to play on both sides. If Black plays

at a, White can create a ko, while if Black does not play

, White plays at b and Black dies outright. 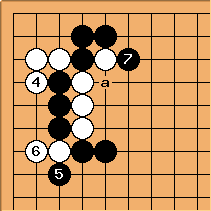 in the main diagram at

here, White can capture the three stones whatever happens. However, this gives Black too much thickness (note that Black a next makes a ponnuki in sente). 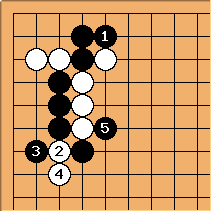 This new continuation was played by AlphaGo Master (e.g. in its 29th Tygem game,

against Mi Yuting), and it is said that