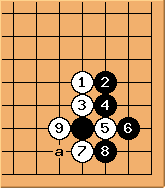 This is a reaction to Morten Pahle in Plays Against Low Chinese Opening. There he proposes this line of play. 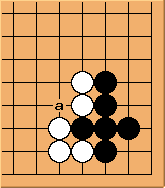 This is the resulting position. Although this apparently may seem like a reasonable result for White, I do not agree. White's shape here is bad, especially because of the possibility of the cut at a. Black might even cut there directly, but can also punish White for bad shape by playing the moves in the following variant. 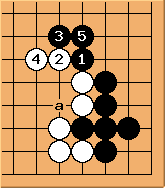 Black's influence is already comparable to White's, while Black has over 10 points of certain territory, and White still has bad shape and the cut at a to worry about. 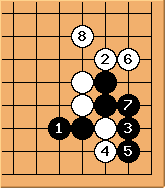 in this diagram, which again shows a good result for Black.

, but then Black plays at

, and White will have trouble looking after the two white stones in the center, because White still needs another move to live in the corner. 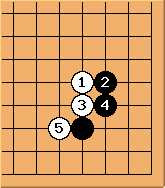 Joseki here is to play

as in this diagram. This leads to the nadare joseki, which is rather complicated.