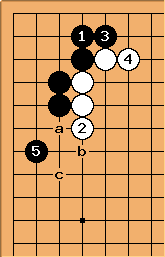 is more or less the only move, after which black can choose between

here and black a, which is discussed below. White has little choice in this variation, but she should not be dissatisfied - playing the avalanche means white is going for influence, and that's what she gets, in sente moreover. Black could play black a, white b, black c instead of

. That way he does not need to slide down to the second line, but white's wall is one stone longer. 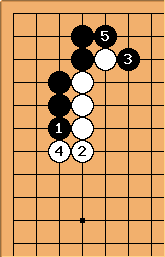 , black can convert to the previous variation, but more usually he will play the clamp of

, either directly as shown here or after yet another push as shown below. With

white chooses a peaceful variation, giving up her influence along the top to make influence on the side instead. 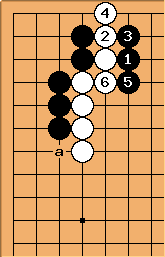 a fight breaks out in this upto now so peaceful joseki. White does however need a working ladder, or at least a big ladder breaker, as we shall see below. The three black stones are stuck against white's wall, which itself does not have eyes yet either. For now, however, black needs to do something about his corner group first, as white a is sente 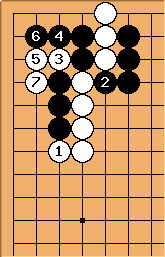 In fact, white could play

(a in the previous diagram) instead of

immediately, leading to this exchange where each side captures three stones, and white's switch from the top to the left is even more outspoken. 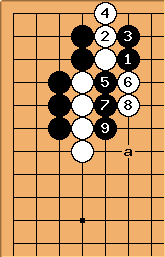 The ladder occurs if black tries to cut with

- squeezing with a is not a satisfying result for white. 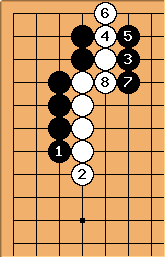 If black pushes once more, more or less the same variations follow, although of course the exchange variant is not possible any more.