After Andre's pages on the nadare joseki, I have felt confident enough to start it in those situations where I felt it was correct. However, my opponents (at around my level - around 9-10 kyu) often fail to follow suit - the following situation occurs: 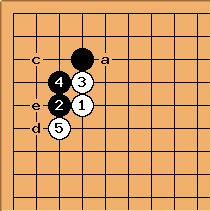 Instead of playing the hane at a, White plays the hane at 5, and I (as Black) am no longer sure what to do. I have not seen any variations where this happens, and the 38 Basic Joseki book lists Black 4, White a as 'the only variation'.

I usually play a myself, quite happy to get a large corner and leaving White to sort out her own mess.
But if White plays, for example, d, I tend to reply at c (as opposed to e) becuse I don't want to be cut (although I cannot really see it being that dangerous), and if White has stones on the left side, I feel as if I've lost out. In these cases I've tried playing d myself and normally that leads to a fight which I may win, but which I feel is not 'correct'.

So - the question is: how best to answer White 5 in the diagram and how best to exploit her position afterwards? 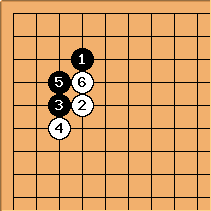 First some remarks in general: In the first place, I would in general regard the white player in this position the person who plays the nadare (with White 3). In the second place, White can also get to this position in the perhaps more standard variants after Black 2, see diagram to the left. 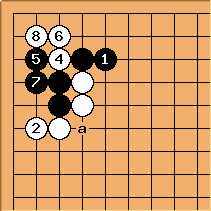 I see various ways to continue. One of them is Black 1, which you already mentioned. I will try to ease your worries about White 2. There are three possibilities:

First, the cut that threatens is real. If Black does not do anything, White 4 to 8 capture an important part of the black group. 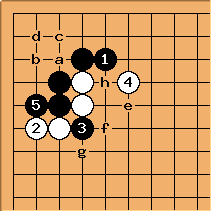 My advice if White blocks at 2 is: first put in the cut at 3. For the time being this stops the threat of White a. After White has answered, Black plays at 5 to defend against the cut (if now White a, Black can answer with Black b-White c- Black d). Black might play other moves like e (better than f) or g (only if the ladder at h works) after White 4 before coming back to 5. Whatever he does, the cutting stone at 3 will remain as a problem for White. 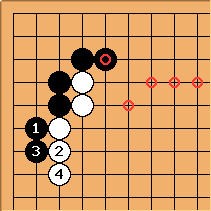 If White extends along the edge first, Black might play as above. As an alternative, Black can immediately go back to the corner to play 1 and 3. Black's corner here is not small (15 points), while White's stones are not doing anything useful - the marked black stone turns any white claim that they constitute a wall into a hollow phrase. After White 4, Black has nice follow-ups at any of the marked points, but he can also play elsewhere. 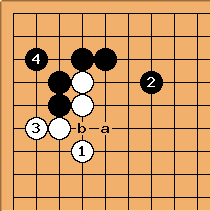 If White defends, Black 2 is a good way to get a good position without any problems. After White 3, Black 4 looks like the right move. An alternative for Black 2 is to exchange Black a for White b, then add a move to make a moyo on the upper side. 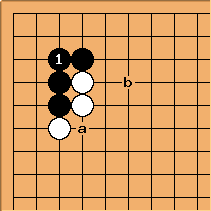 Another option for Black seems to be to connect immediately at 1. It's hard to predict what happens next, but a and b are both excellent follow-ups for Black, and White cannot stop both. 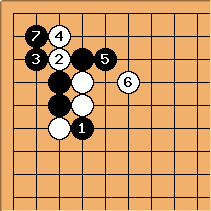 I think my personal preference would be for Black to cut immediately at 1. White 2 seems like the most likely move (although White 5 - Black 2 also seems possible), and the sequence here looks like a variation already mentioned above. 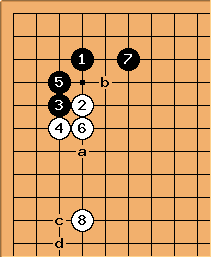 Finally, as a reference, the normal joseki in this position. The moves to White 8 here are normal, and might be used as a reference - anything that Black gets (in sente) that is better than this, is good for him. Major variations in this joseki are White 6 at a, and Black 7 at b.