Author of Go Album and Go Suite for Pocket PC. Also, check out: PointPopularityByMoveNumber. Just like every other software guy to discover Go, I once tried to write a Go program. I have some old Go related posts from U.S. Go Congress 2005 on my family blog (

http://ashleyf.spaces.live.com/) and, if you care, I have a more work-related blog at 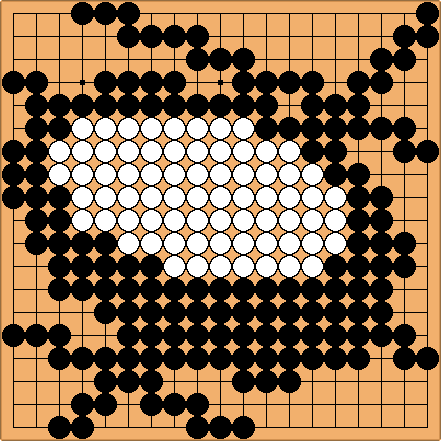 Arno: a Martian with a single eye?

Charles Looks more like a bowl with stones, to me.

Nodog: Bird poop on a basketball?

Janet: Half a coconut on a grill?

Crimson : An egg smashed on a goban?

chrise a lost game for white ;)

doomgo89? An Mandelbrot on a goban^^

I'm experimenting with richer diagram commenting. I'm basically just thinking of inline icons for relating the commentary to points and stones on the board. Ideally, it should be as complete as the diagramming feature itself; containing Black and White stones with numbers 1-10 and with square and circle marks. Also was thinking of having icons for marked and lettered empty points. That's about it.

Hey coolness! Arno has added the feature to SL!

Here are some examples of how they could be used in commentary:

"Black does not want to play

here because then White would play

to form the Avalanche shape, so

applies the proverb 'The enemy's key point is yours.'"

"Also, later Black will have a peep at

is a big point on the board."

been played here, White would certainly tenuki and play

is an extremely good point."

I'd rather see separate diagrams.

Some other ideas I've had (but I think are over the top for SL) are further separating presentation from data in SGF. For example, 'macros' in comments to refer to points and stones on the board rather than having markup tags. Then the SGF viewer could decide how best to represent the correlation. I was further thinking of defining a bunch of common comment glyphs (gleaned from KJD and Teaching Ladder games). Things like 'a and b are miai' could become '{miai:Q12,R13}' and the SGF viewer could decide to present however it sees fit. Some may simply display as text (in the language of your choice). Others may use inline icons and display matching markup on the board. Others in the future may even do some bizarre stuff like a 'cartoon balloon' at the point on the board being discussed or a finger pointing at the board while the commentary is read aloud (yeah, I'm dreaming). Also, it could be translated to various languages or represented as a standard set of international 'glyphs' like

Chess Informant does. Even within English you could turn on/off Japanese terms, for example, and choose whether to see things like 'semeai' or instead, 'capture race' in the commentary (I'm sure Charles would always choose the latter :-).

Stefan: I don't know what glyphs are, but what you describe sounds like an expansion of SGF into XML. An interesting idea.

http://www.feniello.com/playground/content/senseis.xml (client-side transform but view source to see the XML). Notice that the annotations are expanded by referencing

Anonymous: Don't know where else to put this, but I think GoSuite is a very nice piece of software, and minus a few wrinkles, one of my favourite sgf editors. I hope you continue working on it and consider developing versions for other handheld devices. (Feel free to delete this comment once you've read it).

AshleyF: Wow, thanks much for the kudos!

Anonymous: I agree that GoSuite is very nice. Any chance you've considered porting it to the PSP (which is in dire need of a decent go app)?

Diceman?: Is there any Windows XP Version from GoSuite available? On the Pocket PC it´s a really great piece of Software. Thanks 4 programming it.

Nobby?: GoSuite is great. I am planning to buy a PDA. Is GoSuite using the full VGA resolution, if the PDA has a VGA-Display?

AshleyF: It works on VGA devices but with pixel doubling on the board graphics. Fonts look very nice though. VGA support's on the list...

LeisureGuy?: I saw GoSuite at the recent US Go Congress. I had so much trouble recording games with paper and pencil that I just now ordered a Dell Axim so I could GoSuite in the future. But I'm wondering now about chip support: The GoSuite page says it supports the PXA250 but the Axim I'm getting uses the PXA270. My hope is total compatibility. Do you know whether things will go smoothly?

AshleyF: Yep, should work no prob.

Redwalljp: GoSuite is an amazing piece of software and I use it all the time. Thanks for producing it.

I have two minor regrets though...

1. I'm using version 0.91 on my Ipaq 4700 and when I try to open a new file, GoSuite can only see files in the top level of either my main memory or my memory card. Subfolders and any sgf files contained therein aren't recognized. I'd really like to organise my files into separate folders. Is there anyway around this?

AshleyF: I need to fix this. Sadly, there's no workaround other than moving the files. This is a bug/feature of the standard file open dialog. I plan to make my own dialog in the future...

2. This might not be a problem with GoSuite itself. If I try to open Kogo's Joseki Dictionary (a file I know to be infamous for bugs and errors) and I have GoSuite set to show "Alternate Moves" instead of "Next Move", I can see a mish-mash of blue and black characters at certain points in the file. The blue characters represent the alternate moves, but the black characters just appear to do nothing apart from decorate the go board. Do you have any ideas on what might be happening?

AshleyF: It seems that KJD has a habit of "manually labeling" (with L[] properties) all points on the board used in the comment text. I think they do that to avoid the

sibling vs. child view problem. Additionally, GoSuite labels points (in blue) that are continuations from the current position (either next moves or alternate moves depending on your settings). GoSuite is smart enough not to stomp on any existing labels, so when the comment text mentions a point by label it's correct. What you're seeing is a mix of KJD's labels and GoSuite's labels (blue) and apparently some of the KJD labels are not points you can 'traverse' to navigate the tree (so black). It may be more likely to look ridiculous in alternate mode because KJD was made assuming child mode (that is, the comments refer to points that way and the "manual labels" are made that way so there are lots of non-traversable labels)

AWater?: Hi, AshleyF. GoSuite is great software, I like it. GoSuite looks like very nice. May I use GoSuite's stones picture in my go software(freeware)? I expect you permit. thanks.

AWater?: Thanks very much.

A.Martins?: Hi, AshleyF. I would like to know if GoSuite is going to work with a qtek 9100 with a OMAP 850 processor.

weiland?: I want to get the latest GoSuite version. Where can I find it? I have 0.91 now but found 0.99 for sale on the internet. Unfortunately when I click download I get a message that the software was not found. I am willing to pay for the latest version as I really like GoSuite!

JesseChisholm: AshleyF, Is GoSuite's SgfReader + SgfWriter + SgfDocument? available in library form? I'm interested in writing a SGF file merge tool for my desktop. If necessary, and source is available, I can massage for cross platform and send it back to you. Thanks.