Anonymous: In my games, I've noticed that nearly as important as atari is when a group has just two liberties. What kind of liberties they are determines whether they're safe.

When a group has just two liberties, unless both are eyes, it is one move away from being in Atari. In all of the below discussion, I assume that the groups don't have two eyes.

Make sure that your group can be saved, even if either liberty is taken.

This group has two liberties, a in the northwest and b in the south.

Black can defend an attack from the northwest...

... but not from the south. The black stones die, because if Black tries to escape with

, White can capture with

Three examples are inspired by my own games:

stones are dead. My kosumi was half-cut by the

stone, and cut by

. If White responds at a, Black will capture at b. 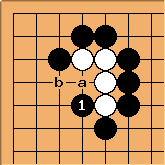 , the white stones are dead. If White plays at a, Black will capture at b. (See shunt.)

. What happens if Black moves at a?

What is this called? --Anonymous

This state is generally called Shortage of Liberties for which the Japanese word is damezumari which supposedly translates to something like "short of breath". Plays like

are popular endgame tesujis that spell ruin for players under 17k. --Patrick Taylor

Patrick Taylor: Thanks to the presence of

can't save the trapped black stones. If

, black should just connect at

, the marked black stones are caught in oiotoshi and so cannot connect at a to escape atari. If

, white can capture at a. If Black plays b, White at c starts the ladder/net along the first line.

Many situations are related to having just two liberties. 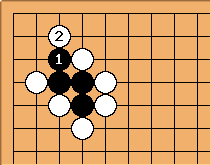 In a ladder, an attacker repeatedly reduces a group of stones from two liberties to one liberty. 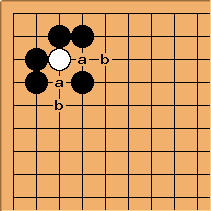 A simple net keeps the number of liberties to two or less.

White has two liberties. If white moves to either a position, black will reduce white's liberties by moving to the nearest b position. 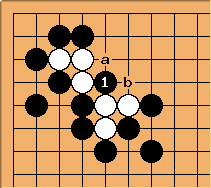 A double atari can occur when two groups with just two liberties share a liberty that's not an eye. 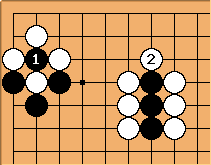 Every group with just two liberties (not both eyes) can be used as a ko threat.

Auto-atari can only happen when your group had two liberties, you move into one liberty, and you gain no more liberties. In this diagram, I chased after

... that I hadn't counted my liberties.

A snapback is a specific kind of auto-atari.

Alex Weldon: Even three is not enough, quite often. 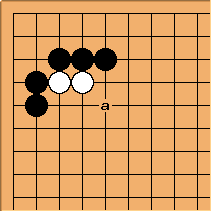 Here, White can be captured in geta with a Black move at a.