My real name is Patrick Taylor. I am an American college student at Princeton University and thus, a member of the Princeton Go Club. I've been playing since about April of 2006, alternating between periods of casual play and reletively focused study. I (like quite a few Americans, I'm sure) got into Go initially through Hikaru No Go, but have started to pursue it because it's one of the few games that can be as rewarding to lose as to win. The only truly discouraging factor is that--as the only humanities major I know with interest in the game--I tend to read slower than my fellow beginners. Ahh well, I guess I just have to make up for it with better shape. If you'd like to reach me for any reason, go ahead and send email to

I like to teach Go to new players, since it gives me a chance to examine my own play habits. As far as my own development is concerned, I've been playing more territorially of late. I like to get some money in the bank and then go for blood. For more, go to the blog.

Questions, comments or sugesstions relating to anything I do at Sensei's should probably go in my discussion section. But if you wanna plaster them all over my page just be considerate of what I've already written here. 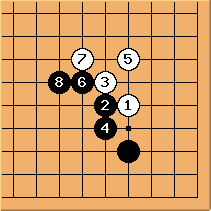 Since I initially did a fair amount of my Go study in a vacuum (I'm a teach myself kind of person), I have a hankering for go books and information--hence the obsession with SL. Reading fills the time between games quite well, and since I absorb more readily than memorize, I don't think I let rote knowledge get in the way of my play.

Books I have Read

Books I am Working On

These are the things you should really learn as fast as possible. In the case of the vocabulary, you don't really need to understand all the aspects of the term. Instead, you should know what each term describes when it is mentioned (especially in the case of "territory" and "influence").

Know the general principles of Opening Theory including the difference between the fourth line and the third line. Also, be familiar with the concept of bases. There are also some joseki that you should know out of the gate because they are quite useful in many simple opening situations. These can be found on my consolidation page along with some basic suji that can be learned quickly and will save your skin a lot. Some familiarity with extensions will help you learn to stake out territory.

sjd123: You should be careful learning too much joseki, it could make you weaker. When you learn some joskei, don't just learn it but understand why to play there. I'm 9k, and I know only 2 josekis. You should focus more on playing and studying things like tesuji and doing some tsumego. A good book would be lessons in the fundamentals of go. Anyway, good luck!