These are recommendations to get started with joseki study. 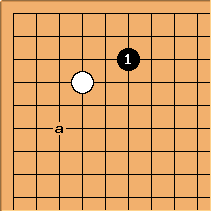 The ordinary approach at

is typically good enough. In actual positions, the choice between

and a is worth thinking about. 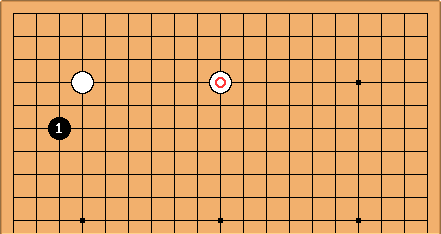 should make Black prefer to approach on the 'open' side - from outside White's framework. 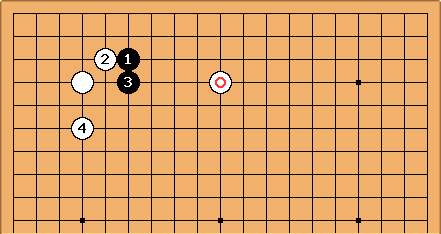 If Black plays on the other side, White has an immediate chance to attack with

work well. This is worse for Black unless he has a way to counter-attack against

To study the correct use of 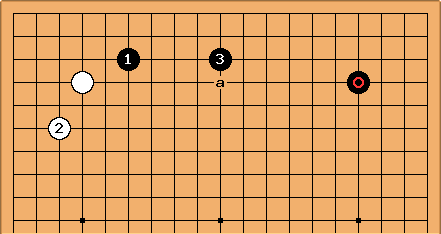 If Black can build a framework himself, that should determine the direction. Here

develop a framework based on

could also be at a, but playing on the third line is easier for a kyu player to understand. 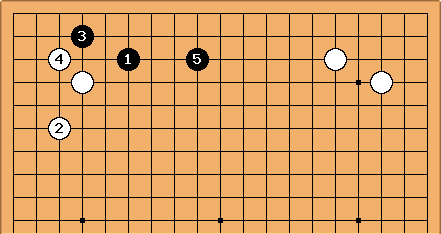 The joseki used by Black here is the other major one to study. But in this case the feeling is negative.

It is better to play

. White cannot take the whole side easily. (You will often see dan players using joseki this way; but it doesn't mean that's good. See more at closed side - closed mind.) 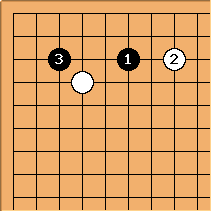 If White plays a pincer, for example with

to make life in the corner is rarely bad.[1] 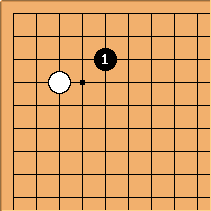 Approaching the corner stone on the third line is the classical play. These days the fourth line approach is used at least as often; but this is still a good play aiming to contest territory and make life. 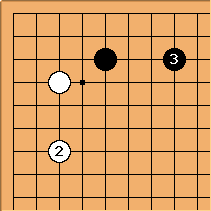 White can play simply and safely with

is certainly good enough, to make a base. [2]

HolIgor: This position is questionable in my opinion. Is it worth it to play komoku if the result is this plain? Ishida recommends one to play

is directed there to erase it.

Otherwise White has to choose a move that creates some pressure on the black stone, like the Shusaku kosumi, for example. The continuation may be as follows: 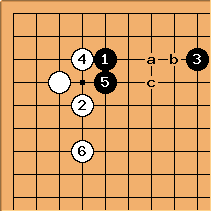 is a cautious move that protects agains cuts. If

plays the two-space extension, then his stone would be too close to the pillar.

as in the diagram invites an invasion at a, though... Which is fun to play out and check what is the result.

Charles Matthews NB that Black's extensions to b and to c are used by top players, so that this position isn't really so simple.

Of course, I don't recommend that White simply extends. The point of the diagram is to introduce the idea that normally this isn't enough for White.[3]

But it is also not enough to recommend that people read Ishida. And even to play the Shusaku kosumi correctly requires some strength. 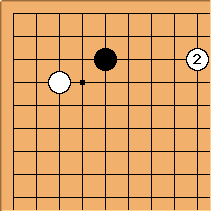 A pincer such as

is better for White in most positions. There can be many variations now. 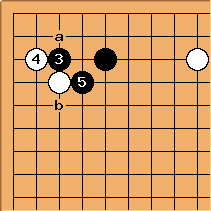 is a reasonable idea, with any pincer.

creates miai at a and b (so if White a now, Black plays counter-atari at b rather than connecting). This is a basic idea to settle a group here.

Icepick asks: What kind of continuation results from this? 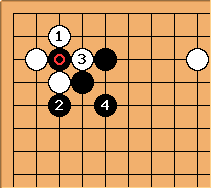 Am I on the right track here? If so, please explain, it doesn't look like Black benefits as much as White. 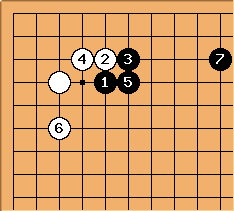 For the high approach, this sequence is recommended for both sides.

Rich: This is confusing for (at least some of) us mid-level kyus.

When one begins (>20k) and plays lots of handicap games, that 3-3 invasion always seems unfair, stealing points away; one even uses it oneself with a guilty pleasure at cheating those 30 points away.

Then one learns more, and understands a little about the power of the influence the invadee gains, and it gets avoided for most cases; a lot of advice is not to use it except in (e.g. Kageyama's Fundamentals) 'special circumstances'. So now I rarely use it unless it's clear that the opponent will be overconcentrated, against (say) double wings.

Now it says that the 3-3 invasion is rarely bad as early on as settling the joseki! What am I missing? Does the included aji of the approach stone make all the difference?

Confused: I think, the statement that the 3-3 invasion is rarely bad is tightly linked to the pincer in this case. The matching diagramm is also labeled Invade after a pincer.

there makes a big difference in the final result:

In most of the common lines (3-3 point invasion and 4-4 point low approach one-space low pincer) Black will end in sente - which is the other main thing you'd look at to compare the results. (Not all, though.)

BobMcGuigan: This discussion about the 3-3 invasion is further evidence that virtually nothing is automatic in joseki. I'm sure it has been pointed out elsewhere that it is incorrect to think of joseki as a way to avoid thinking about what you are doing. In particular the choice of joseki (e.g. 3-3 invasion vs. not) needs thought and depends on the position on the board. When he cautioned against playing the 3-3 invasion Kageyama was probably concerned with people who don't think about the issue of joseki choice but play them automatically.

Rich: Thanks for the comments. I wholeheartedly agree about not automatically clipping through joseki; my confusion was over whether or not this was an equal result.

There are a couple such joseki that I find it hard to convince myself of; this is wholly due to my lack of understanding, and this sort of clarification helps me to revise my assessments of strengths and weaknesses.

Charles The fact that this page attracted all sorts of dan-level comments very shortly after posting shows how wrong it is to slim down the discussion, beyond a certain point.

is too close, as a rule. I would not call it joseki. 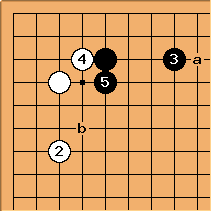 Charles Matthews There is an example where Hashimoto Utaro plays it, so it's not impossible. Extending one line further to a is safe enough since Black's kikashi starting at b are available in any fight. 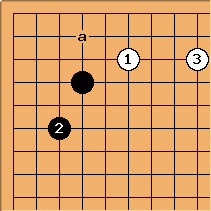 For about a decade, pros have been playing

here directly, without the slide to a. This has to be about the whole-board position. Locally speaking Black can make White over-concentrated in the same way; but also stronger. Therefore I feel that this isn't quite a clear-cut discussion 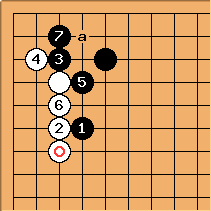 are from pro games, and then

is safe but optional (White at