Loved in Emerald The problem I'm having is that I can't see any significant difference between many of the opening plays in the long/mid game (which is obviously just leaving me mostly playing two hoshi stones as that is the most widely used opening. Would it be fair to say that in general opening plays other than the obvious differences between the 3-3 point and the 4-4 point have little effect on the later game? If not is there any differences in the way you play with and against different opening moves (as in, how would different moves affect your general plan/early moves)? Sorry if this question is a little general but it has been bugging me since I started playing and those pages just reminded me of it.

Charles Until you are close to dan level you don't have to worry too much about choosing an opening plan: anything reasonable will do, as long as you are comfortable with it. But it isn't correct to say that it makes no difference. If you put a 3-4 point in a corner, from a stronger player's point of view it makes a great deal of difference whether an enclosure or approach is played there. For example if the four corners are occupied by

, with three 4-4 points and a 3-4 point, the 'odd' corner is probably the focus of strategy for next few plays.

LovedInEmerald So with that in mind do you think it would be better to play a combination of 3-4 and 4-4 points to try to get used to both or would it be better to just play 4-4 points and worry about the other openings once I develop some more skills? I've just had a bit of trouble deciding on openings as it's quite hard for me to see how they affect the course of the game :S.

Charles Playing a 3-4 and a 4-4 point as the first two of my plays is actually my own style. It's pretty interesting, if you go into it (though you don't need to).

LovedInEmerald The last couple of my games I've been doing that actually just to try and see what the difference is :). Cool, thanks for the advice anyways... reckon I'm going to go with 3-4 and 4-4 as a start for the moment and see what I settle on once I get a bit better.

Fhayashi When playing Black, I like playing the 4-4 first, then the 3-4, that way my opponent doesn't get to choose which side of the 3-4 to play on, since no matter which corner White plays

on, I can play the 3-4 on whichever side I prefer.

BobMcGuigan: A basic goal in go is to make your stones work together in some sense. It may be hard to see how to do that, especially in the beginning, but if you keep that in mind and try different opening moves you can learn a lot.

Charles To back that up: it makes some sense to me to give priority like this:

Fhayashi Can you write your thoughts on that? I'm not sure how 3-4 is more flexible than 3-5. In my way of thought, you play the symmetric (4-4, 3-3) before any asymmetric (3-4, 3-5, etc.) in order to preserve choice in the direction of the asymmetric corner.

BobMcGuigan I'd guess that 3-4 is more flexible because there are two standard ways to close the corner from it, ikken shimari and keima shimari, while there is only one standard corner closure from the 3-5 (keima). But I think maybe the 3-3 is a little more flexible than the 3-4 because it finishes the corner in one move and allows development equally on both sides. On the other hand, it is hard to develop from a 3-3 stone. Is this along the lines of what you were thinking, Charles?

Charles Close, Bob! I think if you play the 3-5 point you commit to taking influence in one direction. With the 3-4 point you can play a pincer or Shusaku kosumi against a low approach, pincer or corner-oriented play against the high approach, so the direction isn't set: of course there are 3-5 pincer joseki but they aren't as easy to deploy in practice. Also there is a point about tenuki having played a 3-4 point: because it is in the corner there are many survivable tenuki joseki for the player taking 3-4, which concede some influence but don't look like completely broken plans.

DJ 3k: I hope you don't mind if I insert a comment of mine.

I think it is not exactly true that playing the 3-5 point means committing oneself to taking influence in one direction: when the opponent plays the approach at the 5-3 point you can always switch, if desired or needed, to a pincer from the other direction, say at the 7-3 point, therefore developing the other direction. Of course whether this is good or not depends on the whole board situation...
Charles I'd then say you were trying to develop on both sides: maximum plan or overplay, depends on context. About the pincer plan: see now 3-5 point distant low approach, for a little information.

For the 3-3 point, I think you have to look at general strategy as well as direction. It is harder to compete in a large-scale game with frameworks based around 3-3 points. A 3-3 point is often played for reasons specific to a strategy, that can be named: cool the game down, deal with one corner quickly, make the neighbouring side extensions anti-miai.[1] These are often counter-plans for White, rather than ideas for Black. They may be more relevant for diagonal fuseki than for parallel fuseki. The 3-3 play is certainly deceptive in strategic terms, belying the simplicity of most of the 3-3 joseki. 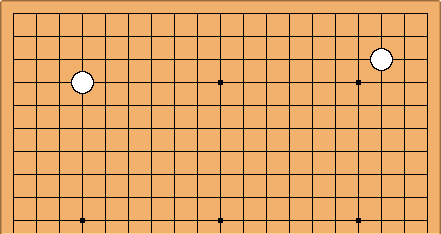 I once wrote about this formation: it isn't so common for Black to make it because the two corners don't co-ordinate well. In fact, rather than assuming the symmetry of the 3-3 point is the decisive factor, I think one does have to look at co-ordination. 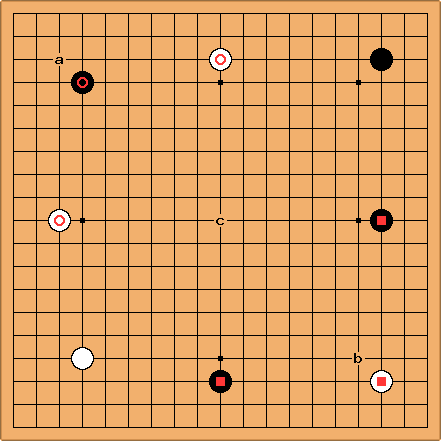 is 'uncomfortable' with the presence of the

stones: it seems White has played in both parts of a miai position. On the other hand

isn't really troubled by the two

stones. You could say that White at a now works better than Black at b.

Bob Interesting position! But wouldn't a real game be more likely to go as in the following diagram?

In a real game, the next move would probably be c. Too much symmetry. ~srn347 anonymous: A Black move at c would be a bad move here because it wouldn't work well with the other black moves. The black stones marked with a square are low and subject to capping moves so black can't build a moyo. 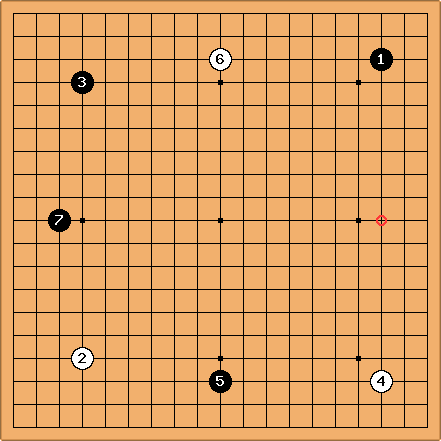 A black play at

seems bigger than one at the circled point, to me. Now it is White's lower left star point stone that seems uncomfortable.

Charles I was economising on diagrams. Yes, the 10-3 and 3-10 points (areas) adjacent to a 4-4 point can be considered miai in the sense that the player taking both can consider that advantageous. Not true for the 3-3 point: neither player rushes to occupy both, and so less hurry to take one. This started the article at

Velobici: Getting back to Loved In Emerald's initial question. The 4-4 point and the 3-3 point "finish" the corner. It is not urgent to play a second move there or for the other person to play an approach. The 3-4 point leaves an urgent move for both sides at the 5-3 point in the same corner. (The above is based upon my understand of Mr Yang's lecture on openings during one of his workshops, which I recommend strongly to anyone who can attend.) So, playing the symmetric points (4-4 point and 3-3 point) lead to a game with fewer urgent moves clamoring to be played....and hence a game in which the weaker player is less likely to play the less urgent moves in place of the more urgent ones.

Charles Well, at strong groups you can find reasons to play an approach to 4-4 on the edge of an expanding framework: that can become urgent.

Charles But that doesn't apply, for example, to the Kobayashi formation. Mr Yang is one of our best theorists, but all simple theories about go are 'Procrustean beds': sources of taught inflexibility.