MrTenuki (KGS 3k): This position occasionally occurs in my games when I'm playing as White. 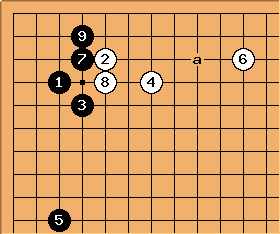 , I did so with the knowledge that Black might choose to play

at a instead. Normally, though, that doesn't happen. While I always thought that the

exchange is normally saved for oyose, sometimes Black would choose to play 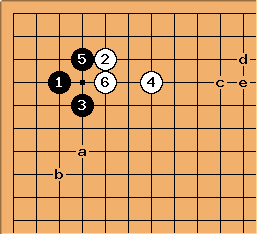 as shown. But isn't this bad for White, at least according to the following tewari?

xela: I don't understand tewari yet, but I think this diagram is a common position from professional games; nothing wrong with playing this way.

is by far the most common response in this position. After that, black will usually extend along the left (a or b), followed by a white extension along the top (c, d, e). Black may choose to pincer instead, but white's stones are reasonably strong in this position, so there is no real need for worry. If you feel uncomfortable with this position generally, you can consider playing

Bill: Well, I did a GoBase search, and it seems that the tachi and the tenuki are pretty well neck and neck. On occasion you will see the sagari.

I remember being surprised at the tachi, too, because it was so close to the keima. But then I began to understand the weaknesses in the opponent's position, and the strength of the ponnuki shape he can make if you don't play the tachi. But it's far from an automatic play. :) 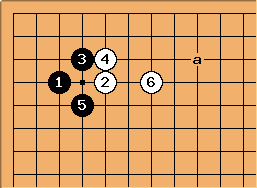 This would be a transposition to a position similar to a Kitani joseki, except that

is not played around a. So White is overconcentrated relative to the "joseki."

So, what can White do here besides NOT playing the keima response in the first place? I considered tenuki, but is that really an option here?

gives white more scope to attack the corner later, and also allows white to take more territory at the top, because white can now extend further than a. 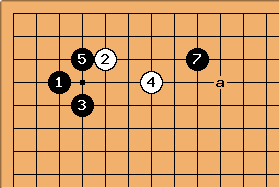 at a (and then black probably won't play