Dieter: Using the replay option on Jan van der Steen's gobase, this is how I interpreted the game. 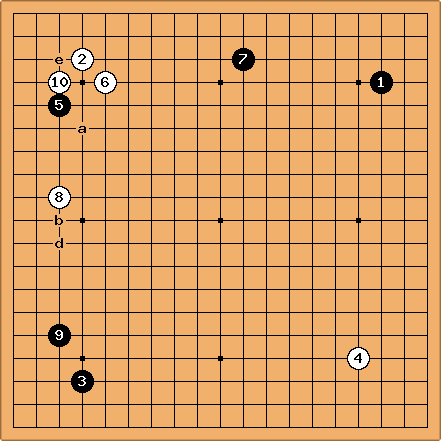 : the lower right diagonal half is symmetric, so the upper left is important. I had no clue about which approach move. The low approach seems to be en vogue.

: Being both an extension from 3-4 point and a reduction of White's influence along the top, I correctly guessed the move to be on the upper side but it landed only the second time on the correct spot.

: pressing at a would only increase influence into a direction which has become less interesting after

. Hence I tried an approach of the lower left first. Then I thought that Black could answer with a combination of a pincer and an extension around b.

: I thought of either settling at e or counter pincer at d. The success indicator (SI in what follows) of gobase's replay tool, made me go for the shimari though I didn't quite understand.

: My instinct made me go for a, already forgetting my earlier analysis of it being the wrong direction. So my second idea was better: preventing easy settlement and making Black heavy. 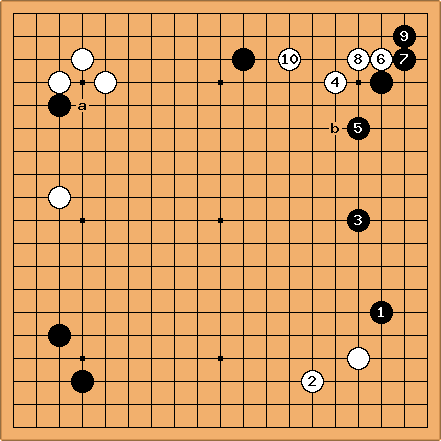 : First try, a, but obviously Black refused to become heavy and played tenuki. I tried the approach at

due to the SI. I had no preference for either approach nor do I have any after seeing the move.

miai, this move came as no surprise.

: being a combined extension, making a global connection, this is another one I guessed immediately.

: three in a row. There is no apparent reason why White should forego this obvious entrance of Black's wide sphere of influence.

, taking away White's eyespace. Eight successive correct guesses is rather exceptional. This looks like a natural game.

: I thought White would make the semi-classical violation of conventional wisdom and play b, giving 4th line territory on a side which Black already invested quite a lot. The influence obtained would then be used to launch an attack on the pincer stone at the top, with one eye on the light Black stone at the top left.

However, White made this conservative extension, which is also a joseki and hence an obvious second guess. It is very probable that b is not an option at all, except for my feeble mind. The kind of pseudo-active attitude which inspires moves like b may well be symptomatic of amateur thinking as may be this kind of thinking about amateur thinking. Bottom line: I know very little about the game. 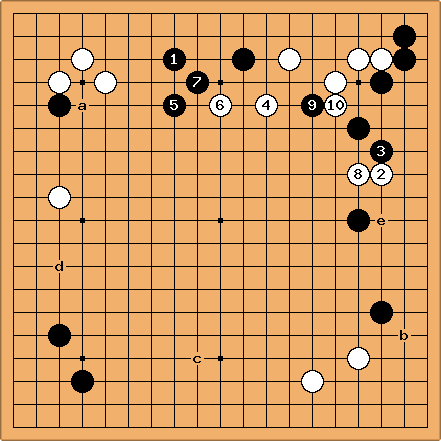 : Because White's play was lacking activity (in my feeling) defending this stone with the simplest extension was natural.

: But before thinking about this move I understood that somehow White has managed to keep sente and that there is no slackness at all in his game. About my choices: a is still tempting in terms of shape but even less tempting in terms of direction, leaving me with the big moves at b and c. d would only invite Black's extension at the bottom, so I decided to keep c-d miai and go for b'', especially with the investment Black has made in that side.

I was far off mark. I didn't expect this invasion of

: I expected B to solidify the lower group at e and ...

: ... I certainly didn't expect White not to make the obvious extension at

neither did I expect B to play at

instead of the rock solid

: this attack of Black's shape was my second guess

: this defensive shape move I guessed correctly at once

: A kind of leaning attack IMO. 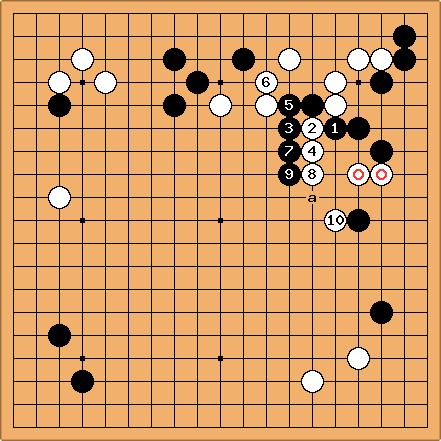 : White prefers to have these stones connected and use

as his only floating cutting stones, because they will be helped by the marked stones.

: Second guess. Indeed this is shapewise better than simply stretching at a. 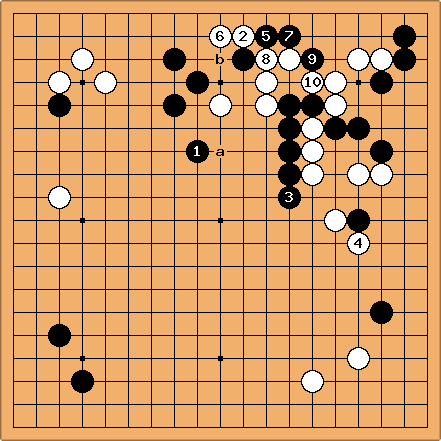 : Surrounds the White group. This is stronger than the purely defensive moves at

and a, my first choices.

: So the question is, what happens if Black had played

: this is the start of an interesting exchange.

, Black would lose the capturing race.

: up to here, the moves are necessary. If at b, Black captures the whole corner and White is left with weak stones. 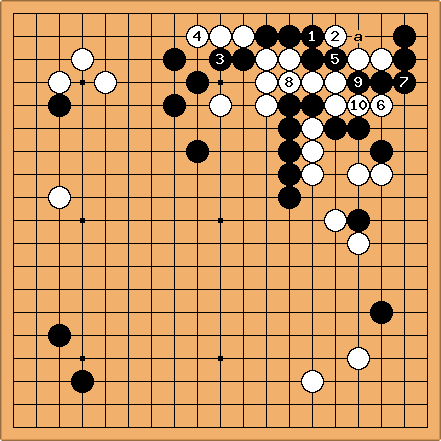 : Very interesting problem. What if White plays at

instead, Black plays at

and Black lives at a so that White is left with just a lump of floating stones.

, White plays a and captures the four stones at the top. 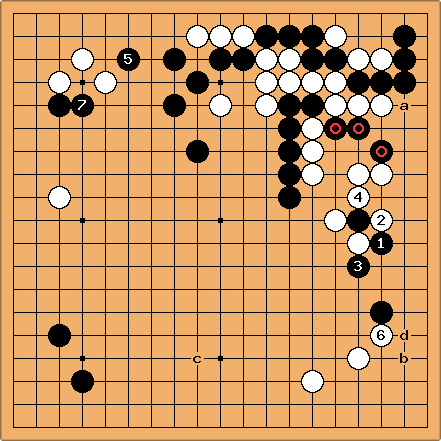 : Now that the exchange has taken place, I'd expect Black to minimize White's gain by playing a. Clearly, that would destroy all remaining aji of the marked stones. The lower part of the right side is still undecided, and thus Black prefers to preserve the aji.

sets up a light structure.

: both White's choice to atari at

as his choice to capture at

(instead of a stretch) were obvious enough to me to have it correct.

: My first idea was to settle the Black group at b. The second to take the big point at c. Only the third time I understood that Black played at the upper side again.

: So these two areas were probably miai. Myself I had d in mind.

: This is a move we have been condemning in the beginning. Conditions have drastically changed though. Black's influence now has come so close that drawing out the stone starts a fight where Black is strong, not White.

From this point onward, my bewilderment at the professional moves only increases. Almost every move is worth a tactical analysis and I don't feel like that. My feeling at this point is that Black has got the better out of the exchange. He has a lot of definite territory and more influence in the centre. White controls a large side on the right but on the rest of the board he has a lot of work, and his territory on the right is not clearly defined either.

Feel free to add your comments, as long as it remains clear who's saying what. This page has nothing proprietary to it. -- Dieter