is what the proverb is about. It is only one of several useful answers to

. The usefulness depends on the surroundings to a great extent. See the end of this page for more.

Below a mix of examples and completely different moves and shapes:

is played to reduce White's framework; 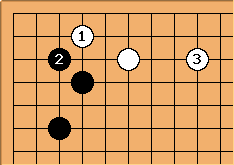 In this situation Black answers the keima slide of

with the kosumi of

. This is a common joseki. -- Bill Spight 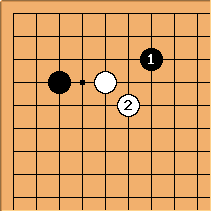 Here's another well-known joseki example of a kosumi response to a keima approach.

This means to play kosumi (diagonal move) when your opponent plays a keima (knight's move) approach to your stone. Your kosumi will be on the point that the approach aimed at. It also aims at a shoulder hit (katatsuki) against your opponent's stone.

Take for example the following situation that often arises in a handicap game: 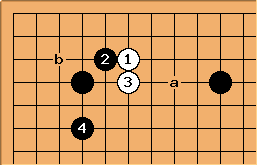 (keima in relation to Black's corner stone). Next Black plays at

answering a keima with kosumi. After

, White will stabilize the group with a play around a. Note that the aim of

is not to secure territory in the corner. White can still invade at b later on. Instead it denies

access to the corner, thus keeping this stone from easily securing a base: the white group remains weak. -- Arno Hollosi

is a kosumi-tsuke. I would have thought that answering keima with kosumi meant something like this (Shusaku kosumi):

Isn't there another joseki when white plays at '1', black responds at the position which white had played '3' and then white will play a hane and the joseki continues...? Random Passerby?

But this, while joseki, is very solid, and is usually avoided. The kosumi-tsuke is good to know, but also relies on the surroundings. You would not typically respond with either kosumi or kosumi-tsuke to a keima kakari.

This seems to be a misconception these days, as the kosumi response to the keima kakari is seen often in pro play. -- Anon

So how come this is a "proverb"? Aside from here, I have seen it only on Jan van der Steen's list, and did not find an explanation there.

The other way around makes more sense: 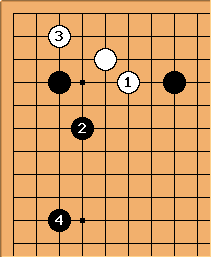 is a keima response to the kosumi of

. That is joseki, also. Bob McGuigan: First, all proverbs have exceptions and are only meant to suggest a proper way to play. The correct move in a situation always depends on the over-all board position. In the preceding diagram

is a kosumi but doesn't have the same relationship to the corner 3-4 stone. Also,

is not the only joseki response to

, there are several "non-keima" possibilities.

Bill: Yes, Bob, all proverbs have exceptions, but you could also say, "Answer keima with keima", or any one of a variety of responses. This is not a question of exceptions. It takes some thought to come up with examples where the kosumi is the correct response. This is a proverb?????

(Later.) I did a Google search. The source of this so-called proverb seems to be this page. ;-)

AJP: From the Nihon Ki-in's Handbook of Proverbs (Volume I) where it is listed as: "play the kosumi against the keima." In all of the examples the kosumi is Shusaku-esque in that it answers a keima approach by taking the critical shape point illustrated here in order to prevent a follow-up pressing move by the opponent at the same spot. Fittingly enough, the point a now becomes an important point. The proverb does seem to be liberally overinterpreted on this page. :)

Bill: Thanks, Andy. As the page history indicates, everybody was guessing about what it meant. Now we know. :-)

.Bob: Well I was responding to the previous post. But it is a more-or-less standard shape move to respond to a keima approach (from below) with a kosumi. WHo knows what a "proverb" is exactly anyhow.