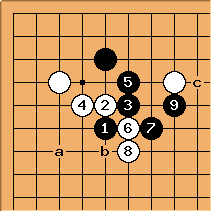 Alex: Twice in one night at the Go club, both as White in two-stone handicap games, I made a low approach to komoku (shown here with the colours reversed), had the two-space high pincer played against me, jumped out to

and, instead of the response at a I was expecting, was faced with the aggressive answer at

, which I hadn't seen before. From here, the obvious line of play is

to W0, after which White b and Black c are honte. However, I had the suspicion (correct, it turns out) that both of my opponents were imitating something they'd seen in a high dan KGS game and, it being a handicap game, wanted to get them out of a memorised pattern and into unfamiliar territory where they would actually need to think a bit.

Patrick Taylor: Did you mean

in the paragraph above? "W0" doesn't appear in the diagram, for that matter neither does 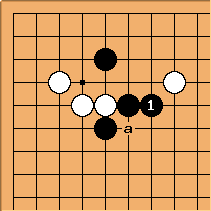 Alex: My sneaky move was at

here. The ladder was good for Black, incidentally, so the cut at a wouldn't work, but that probably wouldn't be the best play even if the cut did work. 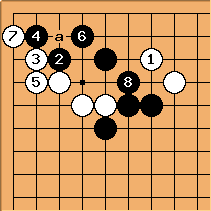 Alex: What I was hoping for was for White to try hitting the shape point immediately with

. This lets Black attach in the corner at

and make a staircase with

. White can't play at a (read this out for yourself), so with the sequence up to

, Black has something resembling eyeshape in the corner, access to the centre, and White can't defend both sides at once. Black has succeeded in starting a fight, which it what he wanted (since Black is actually White in this handicap game). 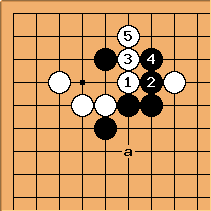 is straightforward. Black gives up the corner with

in return for outward influence. This is what I was expecting as worst-case scenario, and it isn't really all that bad. White gets a lot of territory, but I like thickness, and was planning on playing the honte move at a next if White (that is, Black in the game) followed this line.

, which is obviously bad. Maybe I'll add a diagram for that later, but I'm short of time at the moment. 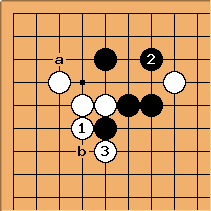 Alex: I think it would also be just fine to play

like this. Black's attachment at a is no longer so great, since the staircase doesn't work after

, so fixing his shape with

becomes urgent. White can make the rather thick hane at

next. White gets a slightly better deal, but Black ends in sente and there are large endgame moves in the corner, which tend to go in the stronger player's favour in handicap games, so I could have accepted this result.

at b, which is bad because it doesn't prevent the staircase in the corner from working. I attached at a, White tried to resist the staircase and ended up with a disaster. 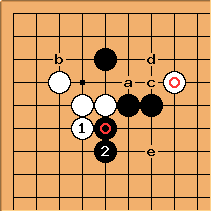 is a powerful center move.
In fact, in other(?) variations (with the tigermouth),

is played voluntarily by Black, going for influence. If white cuts at a, Black can play consistently c (making walls, influence) + separating

OR
fiddle around with b.

Alex: I thought about this, but the problem I had with it is that Black now has two vital shape points left unplayed - d and e and, since both are pure gote for Black and each carries a big follow-up for White, he will get to play at most one of them. 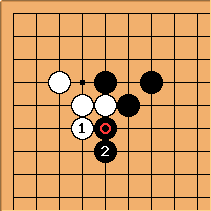 tderz: I had associations with this variation (Joseki?)

Alex: Anyone have anything to add to this analysis? It's actually quite an interesting noseki, I think. I decided to put it down as a hamete/trick play, since I think it ends up slightly favourable to White with the correct answers and slightly favourable for Black if White makes the "obvious" move (taking the shape point immediately). 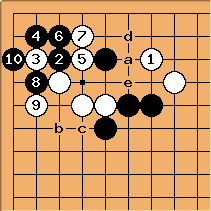 Bill: What if White cuts Black's corner off with

Alex: Yes, of course. Typical of me, overlooking the obvious in favour of a bunch of strange variations. It still gets a little tricky after

, because both a and b look, at first glance, like decent continuations for Black, and White can't prevent both. However, in reality only b is a significant threat.

If White cuts off Black's lone stone with e and connects her groups, Black can peep at b, then play c and get a decent result.

However, after W c, B a, as long as White just connects under with d (Black doesn't have enough liberties to do anything about this) and doesn't try to cut with e, White definitely has a very good result, having developed on both sides, while Black's group is left very weak and his corner is only about 5 points. 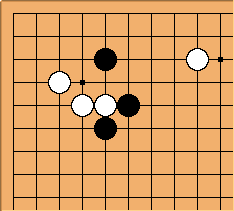 tderz: in this position (which is different, indeed) ... 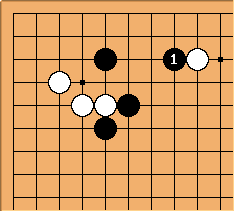 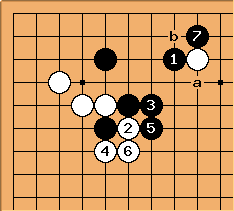 tderz: ... of course, variations after

are possible,
White could stretch at a or hane at b.
Some peaceful variants (from Galactic Go) 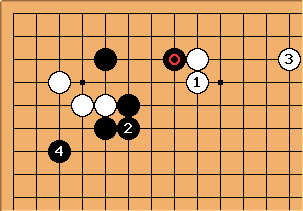