OK. So both the sensei's site and 38 Basic Joseki (?!) show this continuation for a 3-4 Point, High Approach, Ogeima: 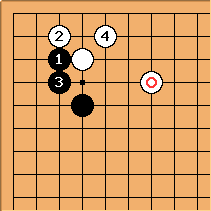 But this diagram is not what I get in my games.

is a joseki move, so it makes sense that it seems natural to me, but instead of the response of

, I tend to get the cut where White plays the outside hane[1] at the location of

in response to attachment of

Regarding the Basis of this BQM

Velobici: The White move at

above is joseki? Don't see it in 38 Basic Joseki[2], or Ishida, or Kogo or on the 3-4 Point Josekis page. Database lookup reveals that

is extremely rare compared the knight's move. The page that you reference, 3-4 Point, High Approach, Ogeima, is not a joseki page but rather a dicussion of the large knight's move itself, which arose during an Amateur Fuseki 2. 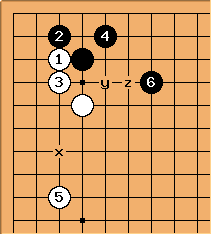 . Section 38 of 38 Basic Joseki is part of Chapter 7 5-4 Point Joseki. Regarding the question on this page, play may transpose into this joseki, should White play

in response to a move by Black at

. But, White has the freedom to choose other lines of play.

Andy Pierce: I'm not convinced the move order matters since you reach the identical position. In any event, All About Joseki answers this BQM in comprehensive detail in the section "Game 3: Correcting Joseki Mistakes". Briefly, the exact sequence given above (dia 1) is called "sort of joseki" with the comment that a black invasion at x in this position is less severe since now a white move at y is sente, as it would not be with

positioned at z. To paraphrase the rest of the section, the outside hane that is the main topic of this BQM is called "clearly an overplay" and cutting immediately is "the only response". Either black gets a big corner, or black adds a few more stones as a sacrifice to seal white into the corner. 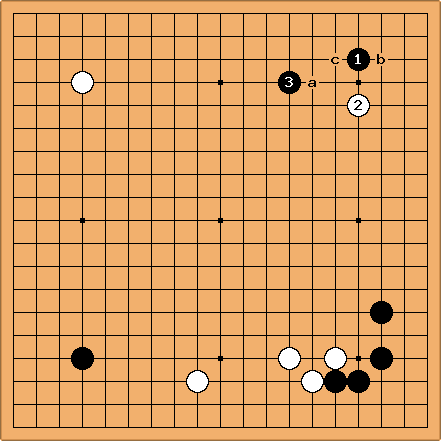 in the game is at a here, this is a normal joseki. (Note in the book

in the Variation 1 diagram.) The point is that after

, White need not play at b, rather she is free to play elsewhere, including c as discussed in 3-4 Point, High Approach, Ogeima. 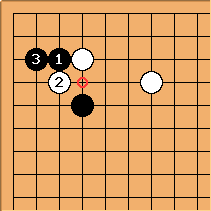 In my experience as Black, cutting at

is bad, as White quickly captures

. Although this might be the desired result? I can't imagine throwing away the

stone at this point in the game. I think Black can descend at

to take part of the corner, but the kakari stone, is extremely vulnerable until the situation gets settled.

Since the cutting play of

doesn't show in any of the joseki references that I have consulted, there must be a play that punishes it. Does anyone know what it is?

Of course, if this is answered somewhere else on the site, feel free to point me toward it instead of wasting this space. Thanks in advance. 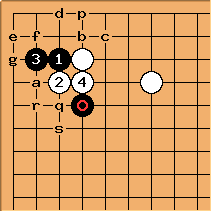 so badly that this proves

wrong.
White a next would kill Black (Wa-Bb c-d and e or f; if Wa-Bp, We), who is thus saddled with the dilemma of Â´leaving the campÂ´ (die-ing in sente) or pushing/crawling on the 2nd line with Ba-Wq, r-s which are most probably worse. 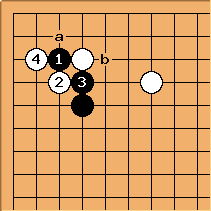 tderz: After the inevitable cut, Black is faced with the recurring question 'extending as the proverb says (a) OR does one have to sacrifice directly (b)?'.

Alex shows b below. 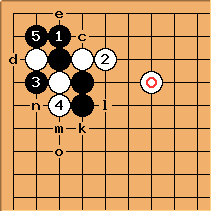 tderz: I will indulge in

at c only below (because in 1st instance, it does not appear a good shape/link to

is different from other, known inside-cut

variants (here on SL), as there is no liberty taken at c
-> this implies that the usual killing threat white d + e does not work right now!
White often thinks about hane-ing at k right now
with the idea of forcing B into an emty triangle l, then forcing atari Wn, B takes at d, then making tigermouth shape at o, but ...

(still have to think about coninuation then -> could empty triangle be necessary??) 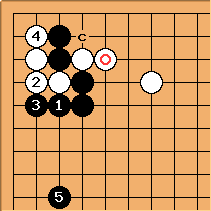 tderz: this variant is always possible
(also if 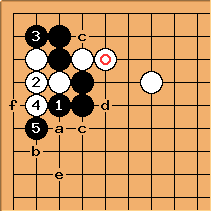 tderz: As Black has an extra liberty at c
he can investigate those variants involving ladders (?).
...
White seems captured independent of any ladder.

Hicham:What if white cuts at a?

tderz: I gave already the letters (e.g.) Wa to Bf.
(W could also transpose Wa-Bb-We to no avail either) 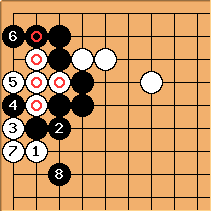 tderz: perhaps safer this way, as ...

are captured on an empty board, right? 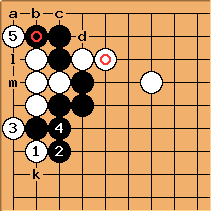 , black a-b-c-d is only ko, while
black k - white d loses by 2:3 liberties.
(However, I wonÂ´t change below diagrams anymore) 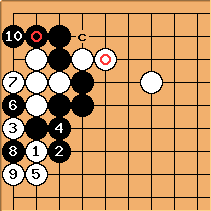 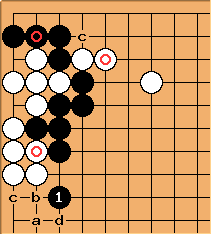 tderz: Here starts the fun - at some time it becomes irrelevant whether White could save the stones
(linking to white lower left corner) and kill BlackÂ´s corner stones,
as the gained influence weighs more.

If White played c above, countering the hane 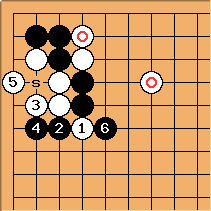 !
(this would work especially well if below were some white stones which become devaluated by the following ponuki !) 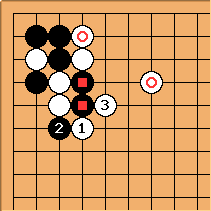 stones in a ladder. 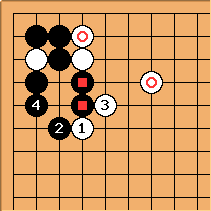 tderz: no problem, Black takes
(you overlooked a black stone s in above diagram) 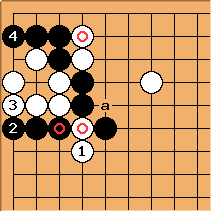 tderz: White is lost after

as, due to the low

, White cannot capture in time at a. 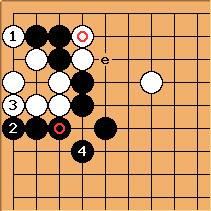 tderz: nice ponuki (no need to exchange something around e now)

Alex: I don't think there's any move other than cutting; certainly the descent suggested by the OP is a bad idea, for the reason mentioned by tderz. You want to force White to choose between letting you live in the corner, or letting you sacrifice your stone for outside influence. 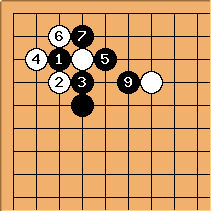 connects) For the beginner, the above variations may seem complex and intimidating, so although Black can get a better result that way, he can still get an acceptable result by taking a more straightforward line. What would be wrong with something like this, for instance?

Bill: That's an inside hane, right?

Patrick Taylor: Correct. I got the sequence confused with the keima response, which is in 38 Basic Joseki. I figured that if the cut was deemed sub-optimal with the keima in place, then it should follow that it makes less sense when the respose stone is more distant. I could be wrong, but I imagine a discussion of the cut during the course of the actual joseki deserves its own page, no?