Complex examples come from a recent game of mine.

These diagrams assume you know something about the game. If you're completely lost, go read the Introduction and the Basic Rules. Some terminology to be familiar with:

Eye
Open territory surrounded (completely) by stones of one color
Base
Potential for eye-making
Fuseki
Japanese word for opening strategy
Fighting
The state of two groups vying for territory by trying to capture/kill each other and/or make two eyes or otherwise live.
Attach
Playing against an opponent's stone 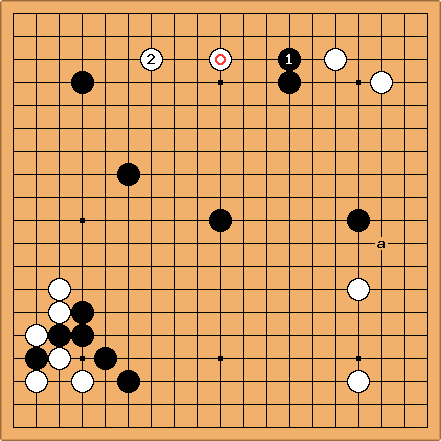 This is the beginning of a game a friend of mine and I played. she was Black, I played White. After a small tussle to determine the status of the lower-left corner, Black occupied the right central Star Point to prevent me from forming a Chinese Fuseki by playing at a. Black last move

, prevented me from crossing under to help

establishes a base for that lonely stone and fighting ensued. 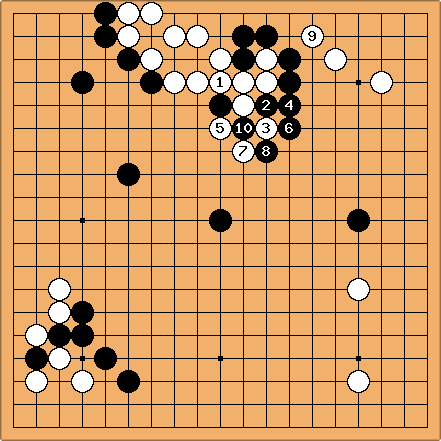 This is where things start to get interesting. Black's group on the right is now under attack, whereas my group on the top is very much alive. My friend starts a reletively large ko (which eventually becomes quite small) with

. At this point, the ko looks to save the life of her black group on the right and put pressure on

White Goes in for the Kill 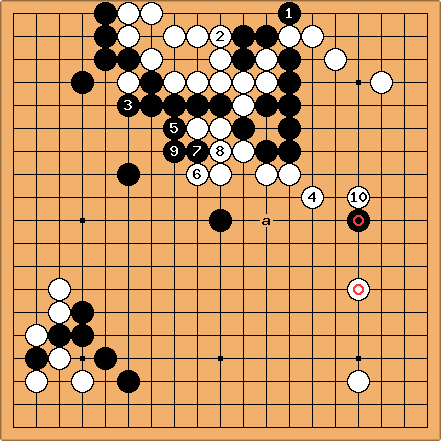 ...And this is where it's all gone wrong for Black. The black group in the upper right is quite dead at this point as the attachment at

seals the group in (if you're curious about this, read about at Life And Death). Meanwhile, my previously vulnerable group centered around

has all but escaped its encirclement. The presence of

from establishing a base. A white move at a (coming a few moves later) will completely trap the lone black stone. This was way more active than any of our previous games--causing serious problems for my friend. 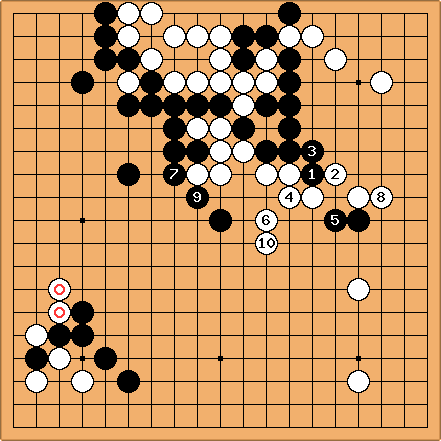 White not connecting in response to the peep of

was probably a little reckless, after

it's pretty clear that two black stones near

are all but dead. Moreover, the large Black group in the upper right has very little room for eyes, and is probably dead where it stands, as well.

It's worth noting at this point that I am far enough ahead that I don't need to really try hard to eat into Black territory. Also, note the marked White stones on the left. These are in excellent position to move up along the side, provided that I keep sente. 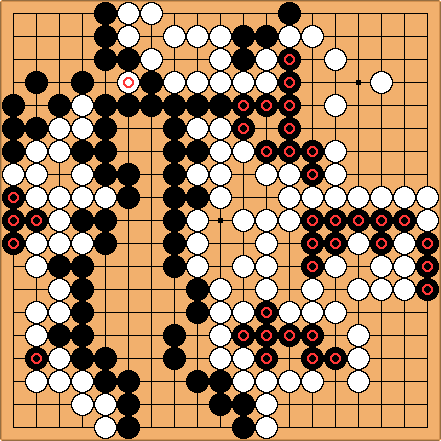 This is the final position. Dead Stones marked with 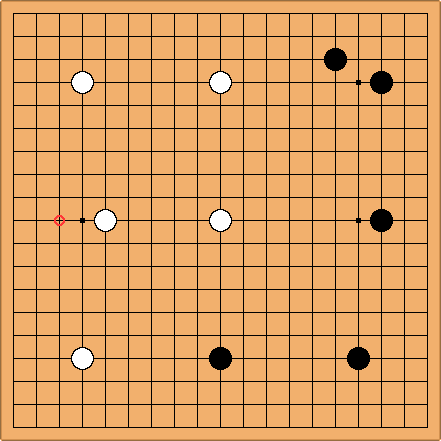 This is how our games usually progress. Usually, I invade at

, establish myself along one of her sides and then we duke it out to determine the dimensions of the borders. Besides White's attack on my invasion, the game remains reletively tame.