The Most Basic Bits

These are the things that you should learn to see really quickly because they either form the foundation of more advanced techniques, are extremely common throughout the kyu ranges, or are not typically seen from players better than 20 kyu (advanced beginners).

, White simultaneously ataris the two marked black stones. This is the disadvantage of playing too many diagonal plays while up against your opponent's stones.

The second line is dangerously close to the edge of the board. When playing on it, be aware that you can get chased into the wall quite easily.

Captures the black stone. While extending at

is technically basic instinct, Black is merely throwing stones away. Even if White plays

This kind of play shows up generally in the endgame. Despite the fact that

in atari, White captures with 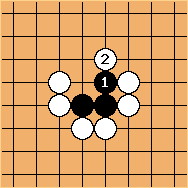 These Stones cannot escape. When they extend with

, they still have only two liberties and can then be put in atari with

These stones are similarly plagued. They cannot get out. As it turns out, these stones can't even escape if they have a stone at

A Ladder and a Net

The initial black stone is caught in a ladder. Unless there is a black stone on the first or second line to which the black group can connect, White can chase the line of stones to the edge of the board and capture all of them.

if there is enough room (

can be played in any order).

[1] Corollary: The double-hane on the second line can also result in really bad things.

with the sequence to

. Remember, however, that a cut remains at a and is the source of many tesuji.