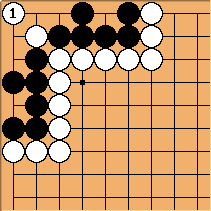 Klaus: I guess, white must play in the corner, a symmetric point.

In symmetrical positions, one useful proverb is to play on the point of symmetry. (See also BeginnerExercise23.) Later, White might try to kill black in a Ko.

Ichundso: I dont think this is a good idea for white because black could also start a ko fight as soon as he gets enough ko threats. White should only do this if he plans on starting the ko fight now. Otherwise white would be forced to play there again if black gets too much ko threats 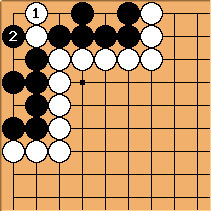 here would be less challenging.

Grauniad: Which is better depends on the situation in the rest of the board, right?

Bill: A couple of comments. First, to Grauniad. White should never play

in the seki diagram (a descent), except perhaps as a ko threat. Locally, the play on the 1-1 or pass is as good or better. The descent precludes White from making a ko later.

Second, to Ichundso?. You are right that normally White should not take two moves to start a ko. Black takes the ko first, and if he wins it he gains 9 points locally with no cost in plays made, since each player makes the same number of local plays.

However, when White can win the ko or make a favorable ko exchange, she should make the ko. Paradoxically, if Black must lose the ko, he should normally make it himself right away, because, as a rule, the earlier he loses the ko the more he gets in return by making larger plays elsewhere. The play would then go as in the next diagram.

in the seki diagram if he loses the ko and has nothing to gain from losing a ko (i.e. if the rest of the board is all settled)? Otherwise black will force the ko and win it, gaining a few points compared to the seki. 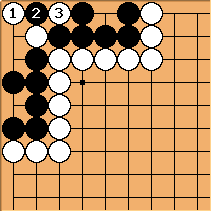 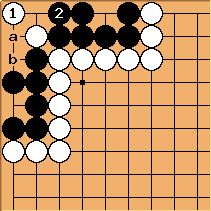 This is probably more likely than above if 1-1 is played. In some sense, you COULD argue that it was worse off than the previously mentioned seki achieved via playing at 1-2, since there's the white player may foolishly play at "a" and hence lose his/her turn, although still maintaining a seki. Conversely, there's an opposite argument that says of the two possible places to play in the top seki, both lead to white's loss, whereas in this bottom seki, white has 2/3 chances of dying horribly.(or not killing black), so that this latter seki is better. Anyhoo....meh.

in this diagram is equivalent to a pass. Either player can still start a ko, black by playing a, white by playing b. So there is no change at all from the situation before

zinger On second thought, there is a change - either player can now force a seki, whereas before

neither player could do so. So

is not a pass after all. Anyway, this is a peculiar situation, and not what I would really call a "beginner's exercise".

Patrick Taylor: Doesn't White have to play at 'b' to force the ko in this diagram?

at 'b' creates a seki, or so it seems to me. Of course, there are global considerations here, but that's supposedly against the idea of tsumego.

anticipate as my inaugural comment, I dub this position, "two dogs fighting over a ball."