Go is not Chess: A Shape-focused Game

One of the more interesting bits about Go is how much it is not like Chess. Chess is a game of violence, winner take all. Go has its share of fighting to be sure, but reletively pacifistic games exist as well. For professionals, these games are filled with implied battles and hidden dangers. For us amateurs, can come from a lack of fighting spirit on the part of the participants, a spontaneous focus on shape and position, or a combination of the two. These games are like elegant dances in a way. Danger exists, and missteps will be punished. In this instance, the players stepped lightly and without error[1]. This game record shows the result.

Since I feel that the game record itself won't be of use to Amalea or Jon by itself, I've commented it here. I'll link in any terms that might be misleading, and I'll try to provide continuation diagrams where it might be helpful.

This game occurred on Saturday night on the

KGS server. There, I am currently rated 14 kyu. My opponent, Dubie, was--at the time--rated 12 kyu. That implies a two-stone difference in strength (kyu ratings go from 30 to 1, lower is better). I played with a two-stone handicap (which means I'm Black). I had played him before. Last time, we played an even game and he beat me soundly--by around 40 points[2]. In that game, I blundered and he punished me excellently, killing a large number of my stones. During the Analysis, I will refer to Dubie as White, and myself either as 'I' or Black. Since I can remember my thought process, I feel that contributing my rational is reasonable. I will attempt to explain white's reasoning where I believe I can see it represented in her[3] moves.

The Players Plant Their Flags 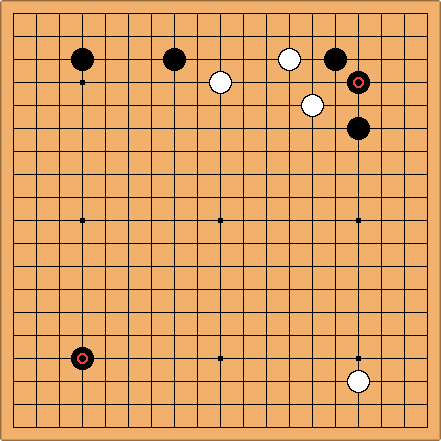 The two marked black stones were my handicap. I started the game with them. In handicap games, White gets the first move. This position is reletively passive. In the opening moves, White placed a stone in the lower right, and then had given up territory on the upper right and upper left for a loose, center-facing position. White had pinned her[3] hopes on future development, whereas I had taken this opportunity to make a much safer play for territory.

The Game Gets Underway. 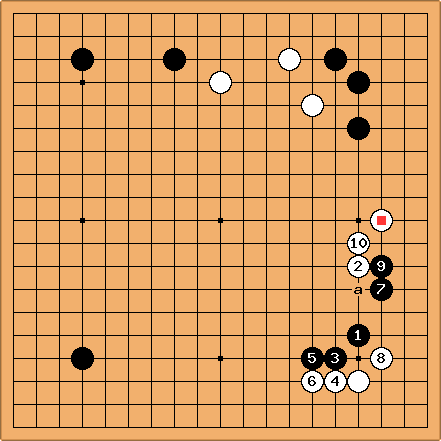 . This move prevents the black stones above from developing down the side while also serving to help enclose the lower part of the right. In response I (Black) played an aggressive kakari (approach move) at

. This move was likely an overplay. Due to the presence of

, White likely could have responded at a instead of

, making a much more severe attack (see the smaller diagram below).

was leisurely, it still functioned as a pincer, but did not invite immediate and bloody conflict.

I decided to make a little room for my stone. I pressed down with

inviting the sequence to

. White is willing to allow me to push a bit here because she makes territory with every stone I play on the fourth line. Additionally, allowing me to turn or play at

means I can seal White in and prevent her from developing along the bottom.

to enlarge the corner and limit my eye-making potential. Finally, I pushed up at

to further expand my base at the bottom. White extended at

from getting cut off. 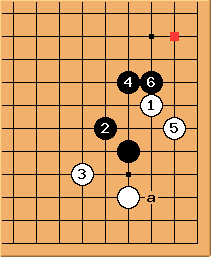 This is an example of a much more abrupt pincer. Black has to move out from between the stones with

, since he can't make two eyes underneath the corner stone and

keeps up the pressure and stakes out a claim to territory on the lower side.

would not be as secure in the game situation, since White has a stone at

. It probably would have been better to press at a (don't concern yourself with the last point if you're not an avid go player). 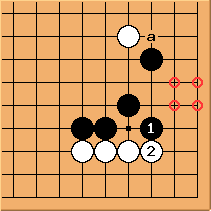 This alternative assumes that Black got to play at

, instead of white. The marked area guarantees an eye without having to push at a first. 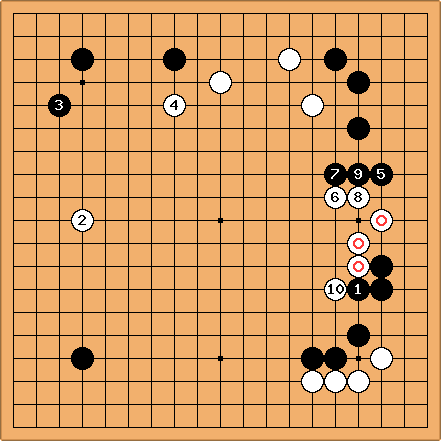 (which pushes out into the center), White switches to the left side to take the big point at

. I respond by enclosing the corner with

. This creates the possibility for a me to create a framework by using the two black stones on the upper side. White anticipates this and caps at

to limit the potential size of the framework.

both makes territory and threatens an attack on the marked white stones. With the sequence to

, White makes some room to escape to the center in the event of attack. Finally, White plays the hane at

. This move serves to both expand the eye space around the marked stones and put pressure on the black group below.

Returning to the Bottom 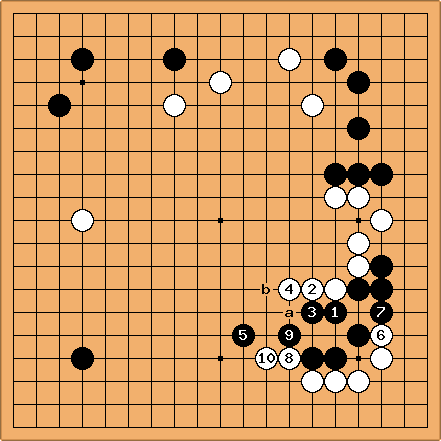 I respond immediately, playing the counter-hane at

. Had I allowed White to play here, she would destroy the eye-space of the group and all but seal in the three stones behind her wall. White extends, and I push back with

, continuing to build a wall facing the center, I jump to

. Exchanging a for b would have been bad for me, as White's wall has much more room behind it than mine would. Jumping at

helped to secure an exit for my group without strengthening White.

limits my eyespace along the side. I must play

before White does in order to preserve the possibility of an eye along the edge (see diagram below). White plays the hane at

, hoping to seal my group in.

prevents White from playing below

and cutting my group off from the center.

Resolution in the Lower Right 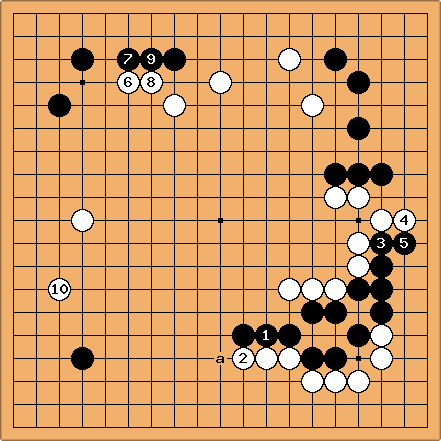 Connects against the peep of move 39 (W0 in the previous diagram). After

, I am guaranteed an eye along the side--my group in the lower right is now alive (apparently, I missed a tesuji at a, see below). Thanks to the last set of moves, white's group on the left is now quite strong. Not only is it alive, but it is well positioned to build substantial territory in the center.

build a small wall against my stones facing the center. This gets White some compensation for the side territory that I have at the moment.

builds a base along the left side. 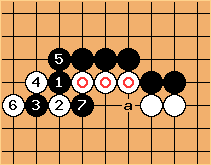 This tesuji shuts in the white stones. Black plays a double-hane at

. In this situation, White can normally get free (or at least life) with by exchanging

and then playing the atari at

sets a trap. If white takes

, then black cuts at a capturing White's marked stones. If White connects at a Black takes

and seals the group in.

A Series of Quiet Moves 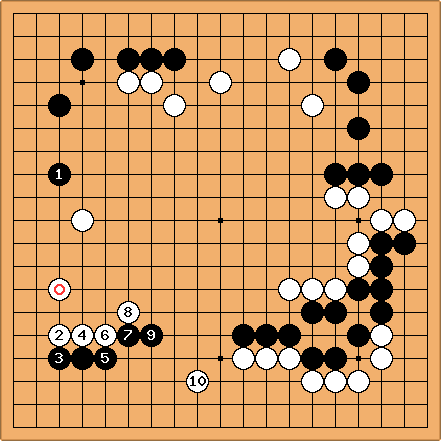 by extending down the side with

. The Upper left corner is now quite big. With moves

White quietly exchanges a little territory for outside influence before playing

. This move takes a bite out of Black's potential territory on the lower side and coordinates well with 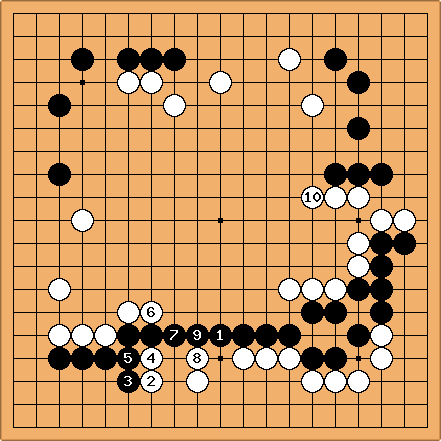 This strange sequence allows Black to connect up at

while white builds a bamboo joint underneath. None of these moves by themselves have any major significance. 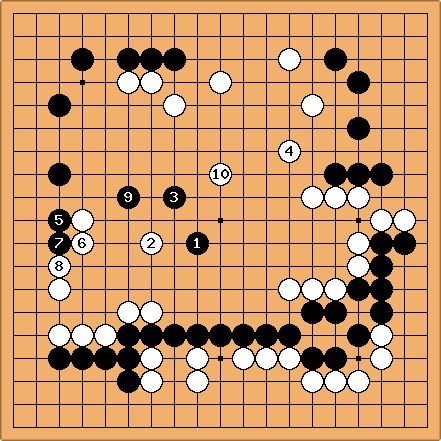 I remember thinking hard about

and then being reletively proud of the result (mostly because of my opponent's response). Move 69 hadn't seemed all that important to me, so I took the opportunity to vaporize White's chance at a large center territory. This stone extended from the strong wall below and looked to link up with the stones along the left side. Even if no real territory came of this move, White wouldn't get much territory in the vicinity of

. White would have had considerable difficulty trying to directly cut

off from the wall below, so she played

from both directions. I calmly answered at

In response, I attached at

helped White solidify her territory (we call this aji keshi), I still made a few points of territory in sente before playing

to assure life for

(barring major mishap). As we will see in the next diagram,

, while expanding her upper right territory was a mistake in direction (it's possible White had some fear of mutual damage). 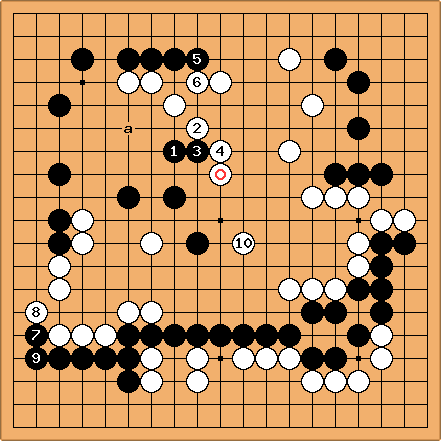 threatens to make a reasonable sized territory between it and the edge of the board, but White seemed concerned with protecting its territory on the right. White played at

and then blocked at

was probably not the most urgent or big, but it prevented white from stealing the corner out from under me. White then played

to complete the sketch of her territory on the right.

Interestingly enough, both players passed up the opportunity to play at a. Even though

was pretty important, a would probably have been just as good as

(playing at a would significantly reduce black's territory in the upper right, as it would have many excellent follow-ups). Black should not have waited overly long, either. after

, he had no reason to fear counterattack on such a stone. Ahh well... 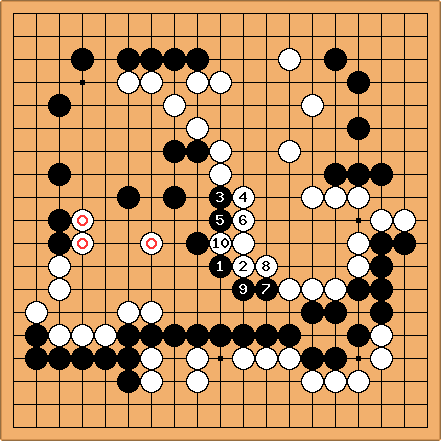 White uses this sequence to complete her territory on the right. Due to the presence of the marked White stones, she gets more out of this exchange than Black does. 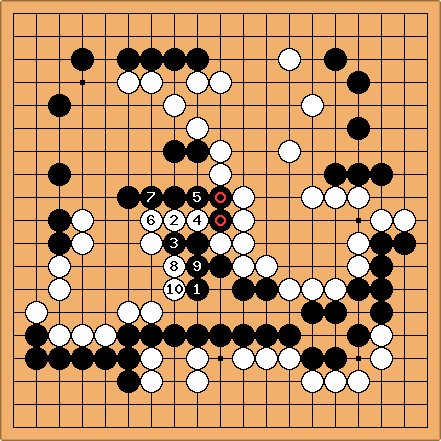 White manages to use the aji of the marked stones to prevent my group in the center from linking up with the left, and in the process defines the boarder of her territory on the left. While the formation around

is reletively weak (which White white exploits for a few points later), the presence of the bamboo joint on the right means that group is in little danger. 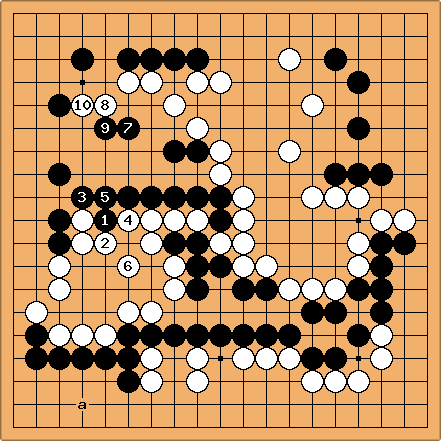 finished the sequence on the lower left. Looking back, I'm surprised that it took this long to play

. With that play, I made some extra territory on the upper right. With

, the territories had been staked out completely. All that remained was to finish the endgame. Although, a White counterattack at a would have been interesting. 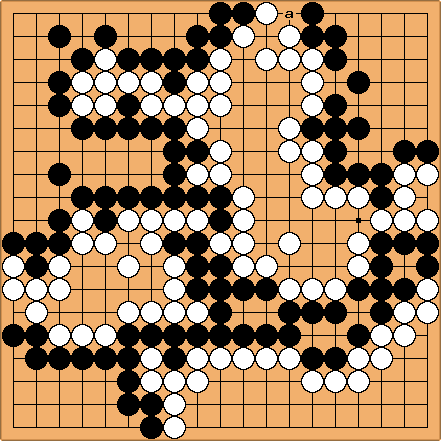 Technically a 1-point endgame play existed at a, but I overlooked it. In the end, this reletively quiet game went well for me. Why this happened I cannot say. My Go-playing friends agree the game was strange. The game involved almost no reading, life and death or capturing races. It would be hard to even point out a serious attack during the course of the game. Such relaxed play can not occur in Chess where the object is defeat. In Go, where advantage wins the day, it games like this are bound to occur some time. I find it interesting to reflect on their underlying calm nature.

[1] Of course, without error is relative. My opponent and I are approximately equal in strength, so it might have been hard for us to spot each others' overplays.
[2] Every 10 points supposedly equates to a stone difference in strength. It means that if someone beats you by 30 points, for example, they are likely three stones stronger. This assumes, consistent play, however. Games are usually considered 'close' if the winner is decided by less than 10 points.
[3] Gender conventions are the subject of much debate on SL, but many books published in English refer to White as female and Black as male to avoid confusion during discussion.