In Teaching Game 67, this position arose: 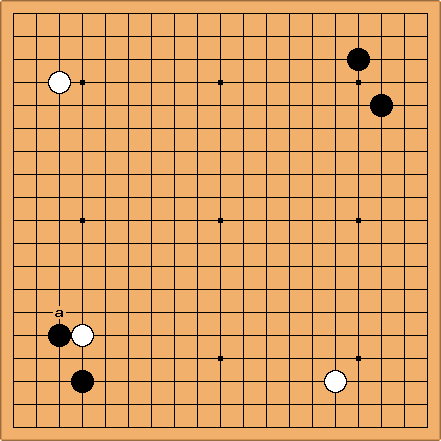 I had a hard time deciding whether to play a or play the avalanche variation: a would be played if the left side were big, but since my top corner isn't finished I don't know how that will turn out. The avalanche will develop the bottom and that clearly works with White 2.
As I reread my comment I realized I didn't explain why I thought one side was bigger than the other. Both are 10 lines apart. But when the usual joseki is complete if I play a the result will be a five-line extension from an incomplete corner on the third line to a fourth line stone. On the bottom it will be an incomplete corner on the third line and a formation of stones at least 6 lines high, and no good place for Black to play inside the middle (i.e.) two-stone extension along the side. Which should make it even harder for Black to figure out how to approach the right bottom corner.

First, I am not sure about direction here either. Secondly, I would suggest to try to analyze this a bit more dynamically: Let's see what happens if you play the usual joseki: 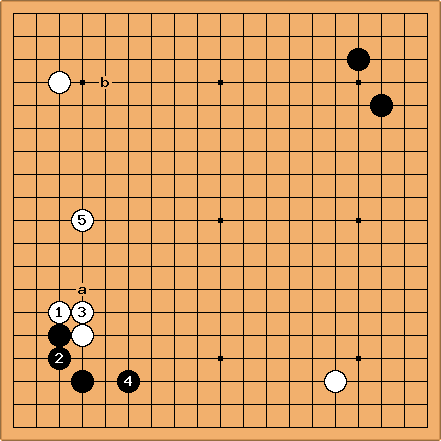 (Of course you choose this variation, not 3 at a.)

Is this a flat position? Well, if Black would enter at b, yes. But then, you would welcome this black move: 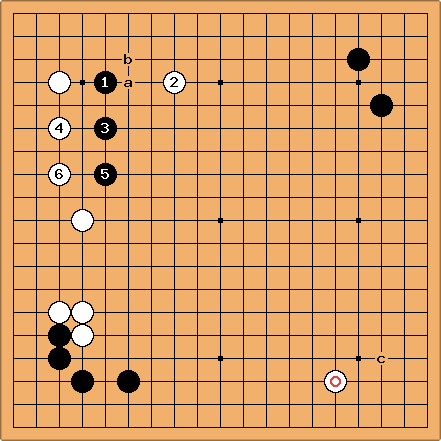 White 2 works well here in my opinion -- this is a bit similar to the Kobayashi Fuseki.

Of course, Black might realize this as well. And instead approach there at a or b. Well, this is a little subtle and beyond my judgement.

I would worry more about the lower right corner. It has become very uninteresting for the marked stone to develop towards the left. However, if Black enters at c, you are pretty much forced to do that, as far as I can tell. (No, you don't want to play taisha here...)

JoeSeki The resulting pattern on the lower side is the very reason I dismissed this line of play. To have played my very first move (White 2) on the 3-5 and then have it become an uninteresting side would be painful.

dnerra: Yes! If you play a special move, you want to make it work! 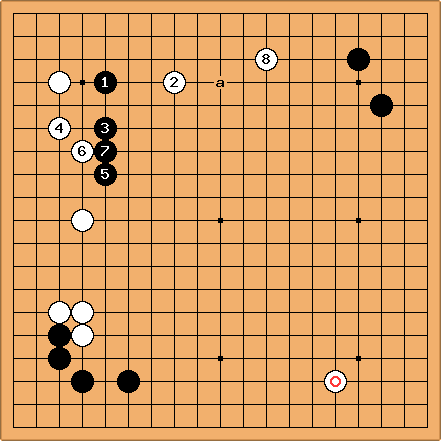 unkx80: I think White 6 can consider playing the peep here to get sente and grab the big point at 8 before Black plays at a. Of course, this leaves some aji on the left side, but currently I do not think Black can invade the left side without affecting the top side.

JoeSeki Hmmm Looking at the board after this I see Black with two pretty solid corners, and one wall of black stones in the top left. It's perhaps drifting so Black will have to handle it carefully. White on the other hand has an unfinshed corner in the lower side, a weak white group on the top and a zone of control on the left side. I wouldn't call that territory. As the game progressed and Black settled his top left stones. I think White would come under big pressure here. This looks like a good black game to me. At least I'd rather be Black in this situation.

AvatarDJFlux: Hey, I am discovering this page just now! dnerra and unkx80, you're doing a great job! Thanks a lot! I hope Joe and all the lurkers of TeachingGame67 have discovered this page already.
Now: I agree with your analysis here, but I intended to play in a slight different way, see diagram below. Whether this was feasible I do not know... 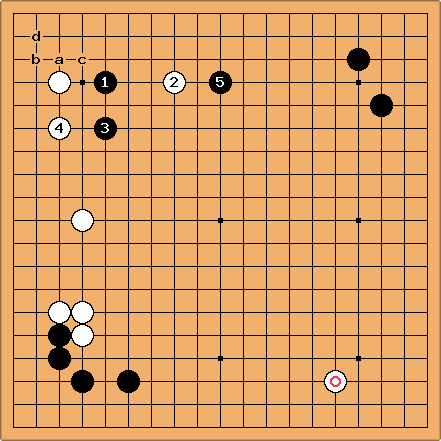 DJ: In other words, I intended to play Hasami right away, maybe after the exchange a-b-c-d. Is it feasible? My perception of the left side is that White is just a little bit flat and overconcentrated, but maybe I'm just overoptimistic...

dnerra: Well, one is never overconcentrated if there is a weak group of the opponent's nearby. So the question is really how weak the two black stones Black 1 and Black 3 are. It is certainly a good idea to try the exchange a-b-c-d first.

Now, let us compare to the avalanche: First note that Black can still take the right side, if he forces you into the small avalanche joseki (note that the ladders favor Black, so he can play it): 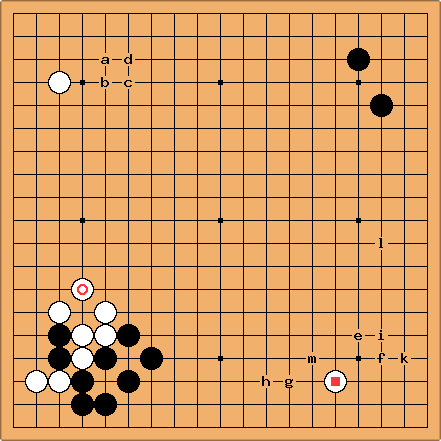 (The marked stone is the last move; I've left out the sequence which is certainly somewhere on SL.)

How well does the white influence from lower left do? Quite reasonably, I would say. Of course, any move out of a,...,d is pretty ideal for Black, reducing the white framework while aiming at an expansion of the black shimari. On the other hand, the square-marked stone is pretty well placed to eliminate the effect of Black's influence. If Black e, White plays f and gets a rock-stable corner in the joseki following. If Black g, White takes the shimari at f. If Black f, maybe White should simply extend to h to reduce Black's influence further.

So I would conclude that the position of the 3-5 stone in the lower right corner clearly favors this variation over the other joseki, while it is less clear in the other corner. But then, I am really not sure myself. And DJ did not cooperate so nicely, anyway :-)

Does that make sense?

DJ: Are you saying that such a variation is better for White?
Another question: Do you think that Black should not play for influence here? I wouldn't want to give White outside influence, as this would work great both with the upper left hoshi stone and the lower right one.
On the other hand, if I take influence instead, it is spoiled by the very same stones... Therefore, of the various avalanche's possibilities only the fighting ones are left... Poor me! What a plight I got myself into!

dnerra: First, questions like "Should I play for influence here?" are a bit hard to answer in general. It really depends on how the influence you build in particular fits relates to the other stones, who ends in sente,...
E.g., it is not a priori clear that white influence will work well with the stone in the lower right. If Black gets sente to play e, and the joseki e-i-k-l follows, then White probably should add another move at m to avoid being pressed down here. And then Black can go ahead to finish an excellent double wing formation.
Then, I deliberately avoided making a final conclusion -- I am really not sure here. I just wanted to show a little what I would consider in my decision here. Also, in all of the variations we have discussed neither side loses very much; so at this stage of the game it is probably more about finding a position you feel comfortable with, not so much about finding perfect moves. 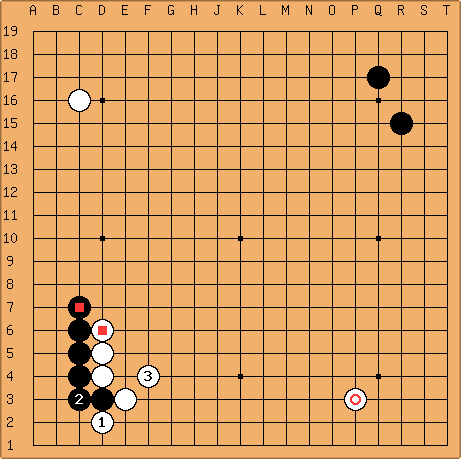 JoeSeki Rather than pursue the avalanche I would have extended here as Black. It's simple, it avoids a fight altogether and I believe Black ends with sente so that he can then play at the bottom if necessary. White's wall is way too far away from the marked white corner. And to put an extra stone on the bottom seem overconcentrated. Pure profit for Black and no weak groups at all.

dnerra: Well, I think if White continues with White 1-White 3, he does get good shape. Note that there is a big difference to the joseki (?) unkx80 discussed, where the two square-marked stones are missing. This exchange looks like a small but clear gain for White -- without it, White has a bit of a shape problem, her two stones at D4/D5 are in danger of getting short of liberties.

White would welcome an invasion by Black on the lower side now. 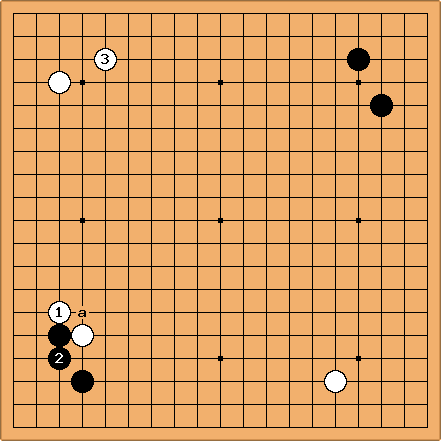 Bill: Because Black's enclosure in the top right corner faces to the left, my feeling is to take sente with

and then make an enclosure in the top left corner, say with

. If now Ba, White can make a second enclosure.

Another idea is Wa -

, which is a bit more flexible for White, but Black can respond at

instead, leading to the large landslide joseki. Since I have a clear objective to take sente and make an enclosure in the top left, I want to avoid complications.