JamesA: I've made some comments on White 42:

I think this move does require some thought. White has been pressed down and will have to make life on the edge now. This will strengthen Black in the top right and weaken White's bottom right corner group. How about this for an alternative White 42: 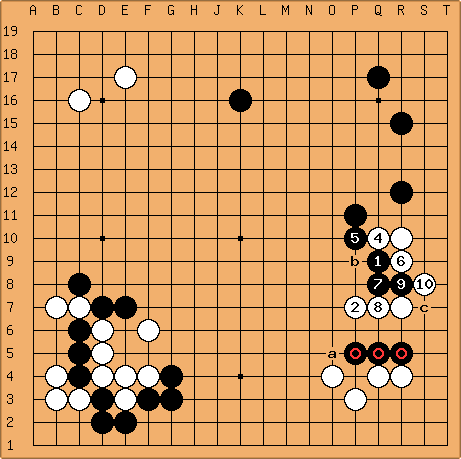 This threatens to capture the marked black stones below with White a. Black might accept an exchange but I think this would benefit White. Assuming Black uses 43 to save the marked stones, White could then play 44 etc., as shown. Black cannot cut White and white gets her head out. This would leave Black with a heavy group under attack.

JoeSeki Since we don't know where Black 43 went, we can assume it helps this situation somehow. So let's just assume Black play really well, and we'll let him place Black 43 where he wants it right now, and then let Black play his normal move (Black 50). Thus Black gets two moves in a row. I think he can cover the cutting point of b with his first move and then play his second move as a cut at c.

JamesA: It's not possible to analyse in this way. Are you suggesting that after White 42 in the diagram Black should play at c or b? If Black did, White would play differently from the diagram but would easily gain an advantage. The point is that Black 43 must be played somewhere around a to enable the three marked stones to escape (unless Black prefers to make the exchange mentioned above), so can't be at c or b. The order of the moves is very important; certainly, you can't analyse by giving Black two moves in a row!

JoeSeki: I did look for a sequence just like this but decided in the end that, the marked black stones would not be cleanly captured and still had a lot of aji. Essentially White would use about nine stones to capture the three black stones, and still not have done the job right. While the original white stone would be capture cleanly. A total loss for White here, I thought. At least that's what I thought when I chose my actual course of play.

JamesA: The capture of the three stones is really very big. After this the bottom right hand corner is worth more than 30 points. Given that White has good territory in the bottom left and top left, I think Black would have a tough time ahead. What useful aji can you see remaining after this capture? 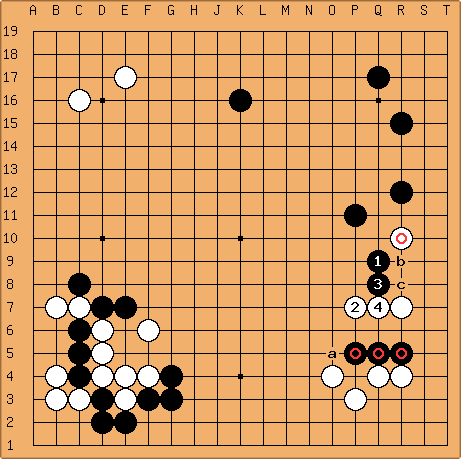 JoeSeki: Once Black defends (it is his turn now), what can White do now?

JamesA: White has miai - if Black captures the marked white stone, White can play a - producing the exchange mentioned above. If Black escapes with his three stones, White can link up to the marked stone with b - Black is then left with a heavy group under attack. Black cannot cut at c because: 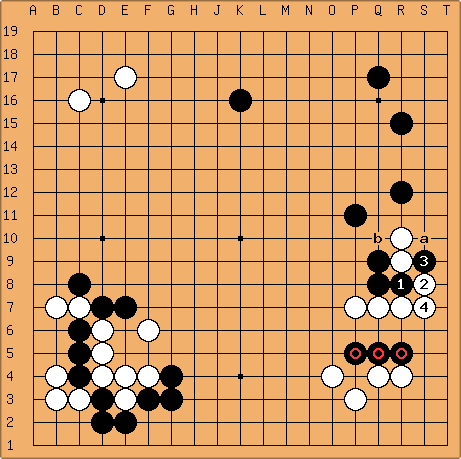 After this White has a and b as miai. White 3 at 4 is even better for White.

AvatarDJFlux: The alternative JamesA proposed for White 42 is quite interesting. I must say also that the way JoeSeki has played in the actual game is pretty solid: his group is practically alive...
How would I have answered had Joe played as suggested by James? (I must admit that at the time I didn't think of such a possibility, I only looked for White 42 at b in the diagram below...) 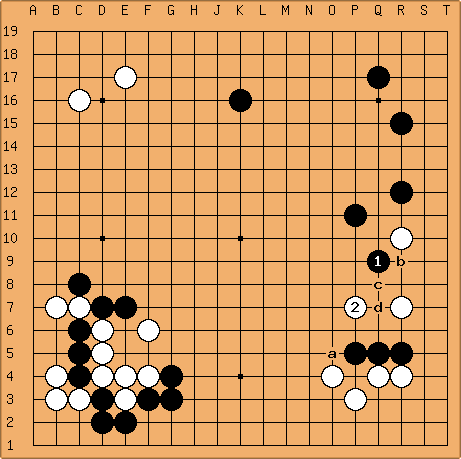 I think that Black has two moves: a and b... I believe also that exchanging c for d as proposed two diagrams above is, right now, out of question: it endangers the three stones and doesn't capture the white stone... 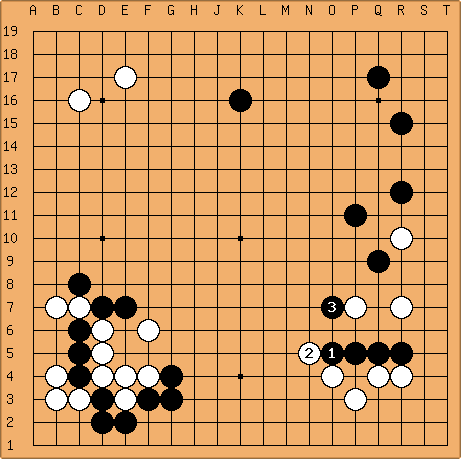 This becomes a sort of running fight between two weak groups. I cannot tell which of the two is stronger. Chances are that in the process Black solidifies the upper right moyo and has the lower left group weakened... 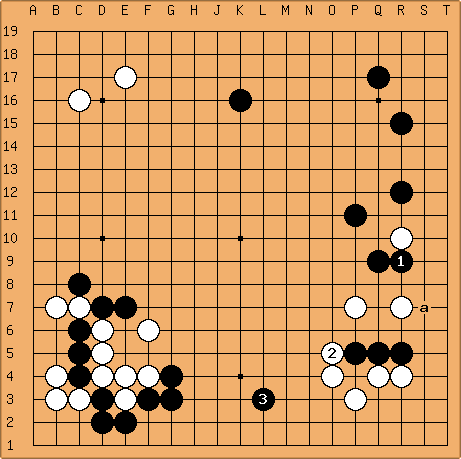 This looks to me solid and big. The three black stones are not cleanly captured and chances are, as Joe said, that they must be actually taken off the board, so that the gain is not much bigger than Black's capture.
And then there's some aji left: what about a black move at a?
Is there any stronger player willing to shed some light for us poor duffers?

When all is said, I think that the course chosen by JoeSeki is quite thick. Or at least I perceive it this way. I'm still left with urgent moves all around the goban...