JoeSeki I for one will be using this game as a sounding board for my thoughts. I usually play way too fast and don't think things through properly. If I can get the dan level players to play as fast as I do, I usually win. It is when they slow down and think that I lose. So I need to figure out how to guide my thought process to help me find the right moves rather then rely on my intuition.

ChessWhiz: Great idea! I am sure the entire SL community will benefit from this game. By the way, should there be a separate page, called TeachingGame67Comments, for the game comments? I'm afraid that there will be so much discussion that it will make the game pretty hard to follow. A separate page for the comments makes it easy to follow the game and comments separately.

AvatarDJFlux What? The entire SL community looking? Eh, I'm just a shy fellow, I can't stand being on stage like this...

JoeSeki I'll break the comments out into separate pages when they get too big. This way it stays cohesive until it makes sense to break it off. So comment as much as you want here.

dnerra: I'll try to be a little help with comments; but please be aware that I am only 4-5 stones stronger than you, so I will be wrong sometimes -- hopefully the stronger players lurking around in SL will jump in and correct me in this case...

AvatarDJFlux Thanks, dnerra, I was sure we could count on you!

JoeSeki: I will adopt the standard of adding new moves above the others so you can read them in order. Additional comments added to existing comment will of course go below. If you want to change this standard please just edit the page I'm flexible. I've gone to a few Yilun Yang Seminars and I will probably utilize some of his teachings here, and mis-apply them horribly :) 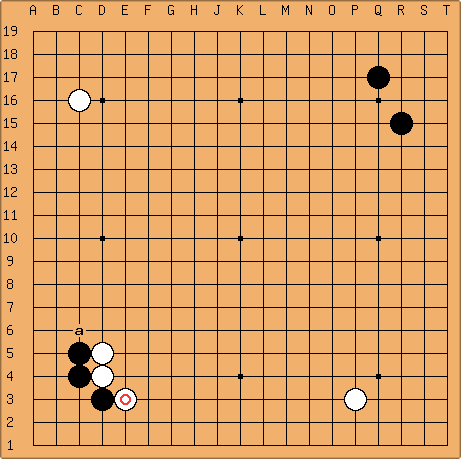 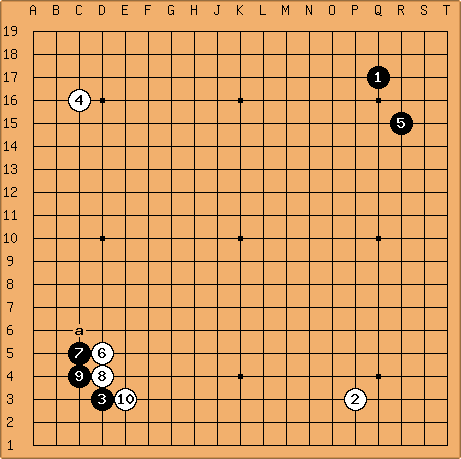 DJ Black 11: No, I do not think there are any other possible moves but the white marked stone.
The real mess starts now... I choose the ONadare! (my God, what have we got ourselves into...)

DJ Black 9: No need to think much here...
The reason why I enclosed the upper right corner was exactly to make you play a kakari in the lower left, so that a white move at a could result in either an overconcentrated or flat shape in connection with your upper corner... Whether I would have realised my wish is open to debate! ;-)
Now the same thing applies here: I would like to play in such a way as to make you overconcentrated at the bottom... Still, I may be the one to develop there, but perhaps this is not appealing because White 2 is low...
Now a stronger player is called upon to explain to us:
Were Black to develop at the bottom, would it be good because it neutralises White 2, or would it be bad because it moves towards a strong stone (true, it is not a shimari...)???

JoeSeki I had a hard time deciding whether to play a or play the avalanche variation. Now a would be played if the left side were big, but since my top corner isn't finished I don't know how that will turn out. The avalanche will develop the bottom and that clearly works with White 2.

JoeSeki As I reread my comment I realized I didn't explain why I thought one side was bigger than the other. Both are 10 lines apart. But when the usual joseki is complete if I play a the result will be a five-line extension from an incomplete corner on the third line to a fourth line stone. On the bottom it will be an incomplete corner on the third line and a formation of stones at least six lines high, and no place good for Black to play inside the middle (i.e.) two-stone extension along the side. Which should make it even harder for Black to figure out how to approach the bottom right corner.

JoeSeki White 6: A corner for sure in this opening, no moyos here. I think I'd like to see how the last black corner gets developed before deciding what to do with my other corners.

DJ Black 5: As I don't want to rush around in this game, I decided for a shimari. Now, which one?
I've tried very few variations; it seems to me a shimari in the upper right gives Black some more chances...
P.S. I'll be away for a few days... I have a meeting in Paris: nice place for meetings!

JoeSeki White 4: Lots of directions to choose from. A 3-4 point in the other direction at D17 felt wrong, opposing komokus would favor Black. I considered D16 and, E17 as well.

: It's half past midnight, and I want to play a move, so I won't elucubrate too much...

(Thanks for a delightful vocabulary lesson DJ! A perfect description of most of of our contributions to SL :-) --DaveSigaty

I wanted to play opposite komokus on the same side, but now I cannot. No hoshis for me neither, nor sanrensei nor Chineses...
So I play this other komoku, just to spoil the lower side. I think this is a classical opening for Black, called something I can't remember right now, but I'll do my researches.
Anyhow, playing like this is exactly what we need: no early fights, difficult fuseki, multiple choices and probably balanced chuban and complicated yose...
Hopefully so...

JoeSeki White 2: I believe my biggest problem is knowing the proper direction of play, so in this game I'm going play for a opening that has lots of directional potential to figure out. No 4-4 or 3-3 points for me in this game! :)

However I really wanted to play Q4. When Black plays a 4-4 point and White plays a 3-4 point facing the 4-4 the book The Direction of Play by Kajiwara Takeo claims it's a losing move. If the proper direction of play is adhered to then it's an easy game for Black. I don't think I can say if the moves are reversed as in this game the same can be said. I chose 5-3 point to emphasize the bottom side and to deny Black the ability to form a chinese opening by taking the 4-4 here. A high approach to Black 1 seems like it would set up the center nicely for me, so I think Black will have a hard time figuring out how to approach me in this corner. I chose P3 instead of R5 for just this reason.

AvatarDJFlux Black 1: When I was younger and around 4k-6k, I believed my fuseki wasn't that bad. What was surely bad was my perception of shape and my fighting ability. Yet, I always played sanrensei or Chinese fuseki (because I was very fond of Takemiya and Shuko).
Today I am pretty sure my fuseki is terrible, and the fighting ability... well, it must have gotten a tad better if I got to the heights of 3k%%% So I have decided to go for a calm and slow-paced opening, trying not to fight too soon... well, if my opponent agrees...
But watch out! I am notoriously inconsistent!

dnerra: I have to start criticizing already! :-) According to Japanese etiquette, you should play your first move in the lower right half of the upper right quarter of the board, i.e. Black 1 should be at R16. I am sure this is discussed somewhere on SL but I can't find it at the moment.

DaveSigaty: True enough over-the-board. However, on the web the opposite must be true, no? Since both players face the board with the same orientation, the way to allow White to play in her lower right corner is to do as AvatarDJFlux has done and change to the upper left half of the upper right corner. :-) The other way would be to start in the lower left corner of course!

unkx80: The page is Playing The First Move In The Upper Right Corner.

DJ Mamma mia!!! I even wrote something there, and then went on playing on the wrong quadrant...

And I didn't even say onegai-shimasu... but I can tell you I bowed very deeply before playing... ;-)))