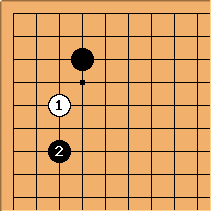 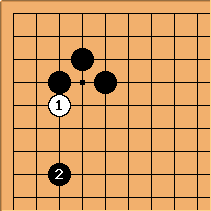 As a novice, I only feel comfortable making a pincer move when the group that my opponent is attacking is fairly strong, as this diagram shows. Otherwise I prefer to make an extension or attachment.

I took the liberty of rearranging your stones a little, to make it look more conventional.

here is actually a very bad move; this move hardly improves on passing because the stone is so weak.

Going back to the first diagram, remember that White also has a one-stone group left. It will be almost automatic that either the corner or the pincer stone becomes strong while White is settling her own stone.

Bob Myers: This example should probably not be here on the pincer page because its not really a pincer. Its just an example of punishing bad play.

as an extension rather than a pincer.

PJT: Fair enough for it to be here in discussion, as others may think the same way, but it does not belong in the main text.

What is the purpose of a pincer?

Scartol: What can we say is the purpose of the pincer? From what I can tell, it appears to be an attempt at miai  if the white stone tries to run (in the first example), Black goes beneath and connects. If White tries to settle, Black secures influence on the outside. Is there anything Im missing or misunderstanding? (Probably a safe bet..)

Adamzero: When I pincer my rationale is this: a) by squirming, my opponent will hopefully let me solidify my corner territory in sente b) prevent my opponent from settling, and by chasing him out in the center build territory and/or influence/thickness.

In the case of the one-space pincer from hoshi, Im inviting my opponent to jump to the san-san, in order to build influence in a direction that I get to choose. (Because jumping out from a one-space pincer is rarely very good: I get to solidify my corner more, and there is no way to slide under my stones to get eye space.)