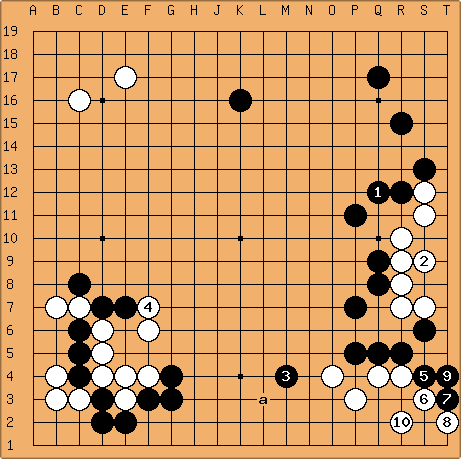 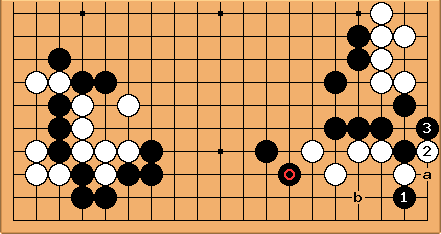 unkx80: I think Black 57 might be best left unplayed for now. Suppose Black plays the marked stone, then

in this diagram can be quite severe. If

creates a big ko which, in my humble opinion, is favourable for Black. If

descent at a, then Black can play at b.

DJ Black 59 and 61: You're right. I've been very, very silly. I've hallucinated, I've suffered from wishful thinking, one of my black holes at go.
I've accomplished very little, you're stronger, I'm weaker. I was tempted to play a crazy move but it doesn't work...
I've wasted three moves, I think. This is another of my problems: if I have a good sequence, I get overconfident and make silly mistakes thinking of playing great moves...

JoeSeki White 58 and 60: Yes I'll answer again. I think this will settle my group now though. I'm not sure if these forcing moves were aji keshi or not. If you connect at (59) then I'll play (60) next, so go ahead and fill that in for me and chose your next move as well :)

AvatarDJFlux Black 57: I think I have to play also here, otherwise you can atari at b and get back the whole corner... Will you answer again?

JoeSeki: White 56 For the sake of my corner group, I think I must answer.

JoeSeki White 54: It looks like you're trying to build lots of thickness to control the center. A few more moves are needed to perfect the moyo though, so let's make sure it stays imperfect in sente, while getting thickness myself. What about the lower right? Is it OK if you get another move? I think so. If I had gotten b, (now

), in - instead of White 52 - then I could clearly say yes. I'm thinking White 54 on the fourth line is for influence or running away; if it was on the third line it'd be for a base or taking territory. So it appears you are not interested in territory right now.

AvatarDJFlux Black 53: I've been wanting to make this move since I was thinking where to play Black 37...
I see it as a bit over-stretching with respect to the "normal" move at a (but if you want to progress you always have to put a little stress in your life...); nonetheless I think it is an interesting move: it should open lot of possibilities for Black and White alike... ;-)
As I said before, I perceive the top left and the left side as miai: the bottom is the place where we both would like to play, isn't it?

JoeSeki: White 52 indeed it is. The best White can do (if Black plays there) is a ko, and it's just too large for White to lose. Black has many more ko threats than White does. The proper way to fight a ko is probably something we should both study! :)

unkx80: A small issue here: White 52 can consider playing at b. It's a way to get a bit more profit while ensuring life. =)

JoeSeki: Good eye on that one. I saw it in the life and death problem but forgot all about it in the resumption of the game. That's a big move.

AvatarDJFlux Black 51: Look, I think this move should be sente against your group on the lower side, unless you want to be faced with a serious ko there (with a hypnotic tone of voice: I order you to believe meee...).
I pondered for a long time whether to attack you directly at the vital point, but this is a more solid way of playing (it leaves you fewer ko threats).