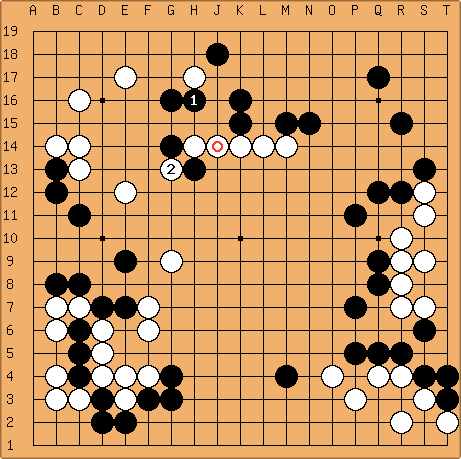 JoeSeki: After White pulls back, Black has to continue his plan and keep white cut off, Black one seems too slow and white will just cut immediately and there is no real pressure on white. Seems an easy fight for white, and it appears black did not really follow his plan.

Black 1 here doesn't do the trick at all, it's not a real connection at all. Black has to cover the cut, and white gets sente to get away and cause problems. The Center is wide open and it's a running battle. Something you don't want, as there are lots of things for White to aim at. So white will settle easily, and Black will have a running group that will be in a lot of trouble.

Black 1 seems to be the only move. and it appears to be a one way street for Black and White, similar to the road to be taken in the real game, but white ends in gote instead of sente , so this is not as good as the game in my opinion. It simply reverts to the variation above.