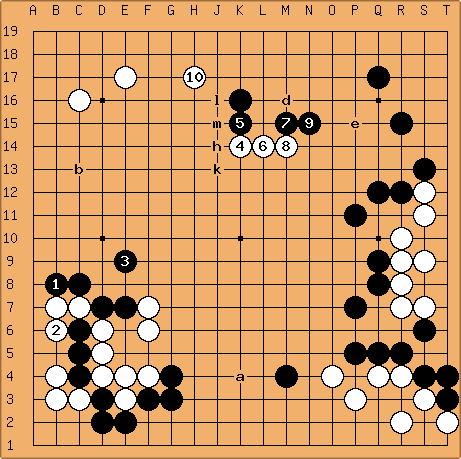 JoeSeki White 70: How badly did you want that territory?

DJ Black 69: For the time being, I'll keep on answering submissively...

JoeSeki White 68 I don't have a clue how to play this middle game.

: I've read somewhere this is a submissive sequence, but that was referred to a boshi on the fifth line: I wonder whether taking territory on the fifth line has to be considered such...
I've also considered an aggressive answer at h, but I wasn't that confident I could kill you... ;-)))

JoeSeki Extend left or right. I choose right so as to damage your moyo, and gain thickness in the middle.

DJ Black 65: This is a sort of weird move (but neither have I often seen a cap on the sixth line...), not very aggressive.
Again, it was difficult to choose. I considered the "normal" answer at now 67, but then you would play the classic contact move on the other side, and there's no telling whether I'd manage to keep sente.
I also considered k, an outright aggression that could lead you inside my moyo, but if then I don't manage to kill you...
So I decided for a "no-tricks-mate" move... hoping to keep sente. Decidedly, this is a weird shape...

would have been fine here. If white attaches at l, you can play

, White m and you cut at Black h. That's a nice fight, with good shape for you and exactly where you want to fight!

AvatarDJFlux: I see the time you took for your next move was well spent: your analysis is definitely thorough, and the move you came up with is very difficult to deal with. For example you're entirely right when you say that if I stick to my moyo you're going to get thickness, and my group to the left could be endangered.
I'm enjoying this game more and more, and I'd really love to see some comments from stronger players, not only for us but for all the lurkers out there... ;-)))
Now it is my turn, and I'll try to match your effort!

JoeSeki White 64 I have been studying this board pattern very closely, and believe it is a perfect problem for discussion. Fundamentally I think White has made a horrible blunder early in the game by letting the white group on the right side become isolated (White 38 was probably wrong), and giving Black such thickness. But we are here, and the problem is where should White play now? White has about 30 points on the board. Black has about 25 with a tremendous moyo possible in the top right. If he closes that off, it's a 50-point gain, and the game is almost resignable. So I looked at the points a-f (f is now White 64) and each deserves some evaluation. Maybe in depth if necessary to clarify the situation.

If I choose a then I think the proper black answer is to settle his stones on the lower side and let the single black stone fend for itself. White's move at a does not develop well.

If I choose b then Black could take a two-space extension as well, but it would be a mistake. White gets profit for free, and then White gets another move. If Black locks down his moyo in the top right then Black gets much more profit than White did; and the black group can still settle with the extension, or run away. So it has choices. Only if Black makes a mistake by following along is b a good move. Black should ignore it.

If I choose c it invites Black to seal his moyo, and that becomes harder to reduce or invade. 50 points for Black, for White 15? Doesn't seem fair.

If I choose d then I am recognizing that invading will be really tough. I intend to run anyway. But where do I run to? My stones are very, very far away. It won't be a pleasant journey for sure. You'll build more thickness to negate what territory I do have, and I think it's pessimistic.

If I choose e then I think it will get swallowed as Black is very strong locally and it's not a good reducing move. It's complex, but I think it's a bad move and not even worth considering.

The general focus of all my attention has been how big a moyo Black might get. If I let him finish it off, then White has a very hard game. So a leaning move or a cap is proper. But a cap on the fourth line? Wow! If you take a knight's move away, then I can play c to see if you really wanted that territory as f (f is now White 64) was not hurt too badly with a knights move. If you chase me out, I'm already on the outside and will get thickness instead and then the moves at a or b might become worthwhile for White. If you ignore it, then I really get to damage the upper right black position. So the problem on how to answer becomes very difficult for Black. I'm not sure about a leaning attack. The cap seems straightforward.

I think if White chooses wrong here, the game is essentially over. This is the kind of position that turns the game one way or another.

DJ Black 63: I'm afraid I have to patch my shape here. Black 53 was meant to do something that it cannot do anymore, that's why I said I've wasted three moves...

JoeSeki White 62: Definitely sente for you. I think White 54 should be here instead, then this side would be tough for you. But I think you can handle yourself on the left. I think central influence is still important for White. As I look at the game. I see solid white groups, and a few weak black groups. Black 53 is too far away from the bottom stones and will come under attack. and the left side needs to be settled or it will become heavy. Black's moyo is not quite complete yet either, in the top right. I'd like to see the opinion of a stronger player though.