dnerra: I'd like to copy the introduction from Bill's in Game33: "...and now people can see how bad I really play..."

dnerra: Well, IGS ranks are about worthless when it comes to determining the correct handicap. Maybe some 30 points of reverse komi? Do you have any real-world rank? 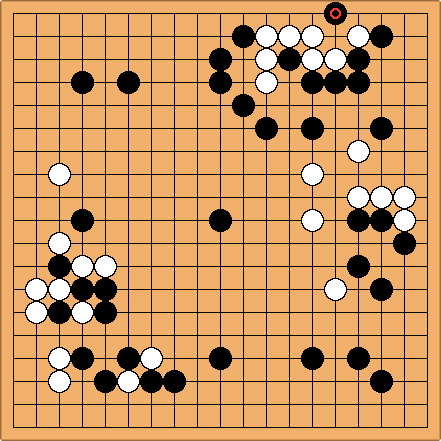 ChessWhiz: Thanks so much for the game! I learned quite a bit. Would you like to play another, say, six-stone game? You would probably crush me, but I would learn even more that way! Thank you again for playing with me. It has been a wonderful experience.

dnerra: I enjoyed it, too! You played extremely well. I wonder why you don't manage to get a better rank on IGS. How about you send me one of your lost IGS-games (if it was played with a slow enough time limit) for review in the GTL?

ChessWhiz: Well, I think if I played more, my rating would get better. I have a win/loss ratio right now that's about 3/2, so my rating isn't stable yet. Not that it ever will be... ;-) Anyway, I don't have a good, lost game right now to submit. The way I lose games is through terrible blunders.

ChessWhiz: Hey! I just turned IGS 11k*! :-D And now I have a game to submit. I just finished playing it on KGS. It was a 10/10 time control, and I won by 2.5 points, but I know I made some sub-optimal moves. How can I contact you, Dnerra? Through your e-mail address? It's not posted on your page.

dnerra: I just sent an e-mail to the address listed on your IGS account. By the way, about terrible blunders -- I remember losing lots of games in a similar way when I had made a lot of progress, but was then playing against more experienced players. Anyway, I am curious to see how strong you are; that game was a little too short to tell, of course, but I wouldn't be surprised if you got near to shodan level in the not-so-distant future!

ChessWhiz: Wow! Shodan! Does that mean I understand the carpenter's square? :-D Thanks again for the game. 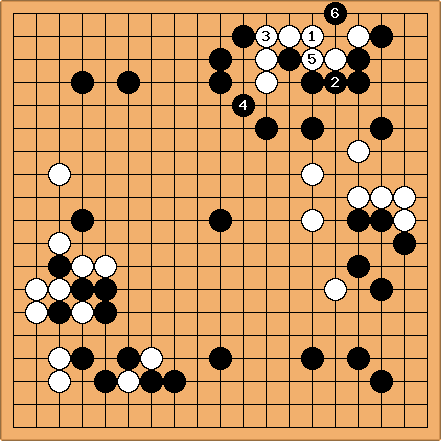 Black 52: I thought about 10 minutes on this move, although I didn't use a goban. I think it was good for my reading skills! In my opinion, playing it safe with Black 52 seems to be a good, safe way to kill. 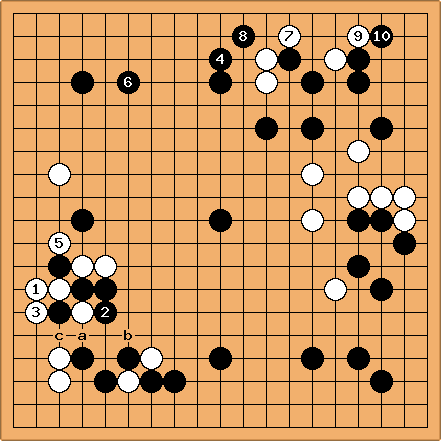 Black 50: I think you are dead anyway. We will see.

Depends on how well you play on :-)

Well...sente is if the opponent answers...but this stretching for possible double sente plays shows good fighting spirit! I simply cannot answer this because I would be dead if I did...not that I am clearly alive after White 49 either :-)

Black 46: Ignoring everything. I gain a nice upper side in exchange for the left.

Black 44: Switching plans. Suddenly, capturing at a doesn't look so big anymore. I welcome any words of wisdom you may have about this position.

dnerra: Right you are! However, I think you should rather have played at White 45: this looks larger. Also, let's analyze the clash in lower left a bit: Black 38 was the only choice of course; Black 40 is necessary to break the ladder with which White could have captured

/38 (after playing White b as kikashi). Then, instead of Black 42, it is probably best to play immediately at White 45: 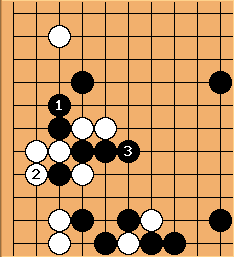 I don't think White can achieve much by starting to atari Black 3, so this is a likely continuation. White has gained a little in the corner, but the rest of the board is yours!

As you have a good feeling for shape, and for size of moves, you should start getting ambitious at reading out such fights! And to see the value of such a key play as Black 1 in the diagram. 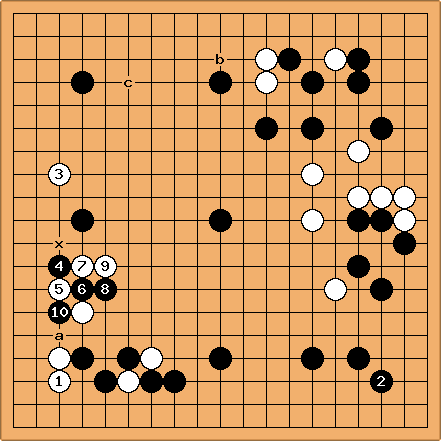 to be played at x. Well, let's try to minimize the losses.

I think White 39 at x would have been bad.

White 37: Playing at 37 would have been easier, good enough and probably even better :)

Black 36: Sure, let's start a little fighting! I'd better play some unsound moves if I want to make this a close game. ;-) Looks like I am a better player than I thought... I might not be needing that reverse-komi.

White 33: By now it looks almost impossible for White to win this game. Let's see whether we can start a little fighting on the left!

Black 32: Can't find the biggest play. I know Black 34 is big, but maybe Black 32 is bigger? I don't want you to invade there after all the stones I've invested in the lower-left territory, but this is very gote. Any advice?

Black 32 is indeed very big, but it is profit, nothing else.

would have been sente (I cannot let you cut at a), so you should have played there first. As a follow-up, I would suggest a (trying to kill the two white stones, while making territory) or c (which is big and further limits the possibilities of the two stones). You would probably still be able to play at Black 32 first. 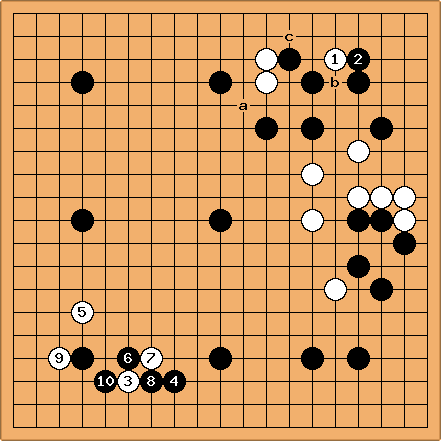 Black 22: After analyzing this position on my goban, I decided that blocking the corner was the best strategy.

This might indeed be best! I only thought about b and c.

White 21: As a general comment, I think you have done pretty well so far. The big white group should be safe, but you gained territory on both sides, and the two white stones at the top are pretty weak now. Running away at a would mean playing on neutral points, while you can choose on which side to make further gains -- this is not what I would like! So let's see how you respond to White 21; possibly I will surrender White 7 and White 9 later. 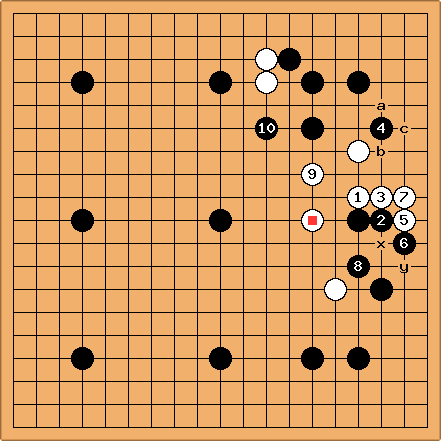 Black 20: This move is boshi. Looks dangerous, but exciting. You say I should try out what I think, and then you can criticize my moves. Here goes! :-)

Sorry, nothing to criticize, great move!

Black 18: Protecting the cut. I have a feeling that this move is too small, but it keeps pressure on your weak group. I don't want to lose Black 2 or Black 6.

There is another reason why I'm not giving you too many hints: You don't seem to need them :)

Black 16: Lots of thought went into this move. I was mainly worried about the cut at x and the clamp at y, but they both seemed OK for me after careful analysis. Your opinion?

White 15: Hane at the top of two stones? Well, with the marked stone in place rather hane from below!

Black 14: Cutting into your base.

This move might be a little better at a (if you want to play in this area). Imagine White would reply at b to Black 14. Then White's shape got much more solid than before, while the black corner isn't secure yet, and White can still get eye space with the hane at c. See also a discussion of a similar move in teaching game 22 (move 4 there). But actually the difference is rather subtle here, Black 14 is not really a bad move.

I think this is good. 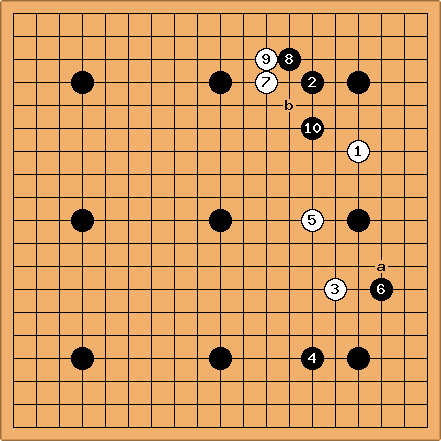 Black 10: You can't really call them hints if you give them after my move. ;-) Even so, I am learning already.

Sure it is a teaching game -- but I think you benefit more if you try out what you think, and I correct your mistakes then, than if I gave you hints at almost every move.
OK, I think Black 8 is not very good, and b would have been better. Black b would aim at attacking White 7, which is good, while building influence towards the outside, which is good, and keeping White separated from the other (weak!) white stones, which is -- surprise! -- good as well! Of course, you can still try to do this, but it would have been easier without the Black 8/White 9 exchange.

Black 6: Is this too thin? Should I have played at a instead?

I like Black 6 better than a. I think it is fine. A more aggressive approach would be to try to separate the white stones.

ChessWhiz: I guess when I play high-handicap games, I get pretty submissive.

White 5: Guess I have to play symmetric then!

White 3: Did I say I don't like to play low kakaris in high handicap games? :-)