This was the situation in the TeachingGame67 after White 52 (the marked stone): 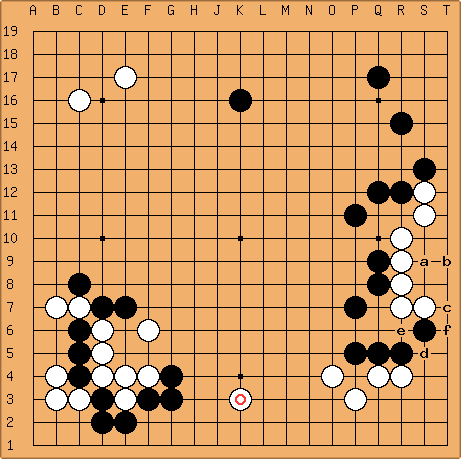 The white group on the right side is an example of a three-spaces notcher.
Taken in isolation and being six spaces long, its status is unsettled: unfortunately it is Black's turn and so the group could be killed by a play at the vital point a. The strongest resistance is White b, but to no avail: there are a number of sequences but all fail. Try to work them out.

But real-life Tsumego is complicated by the surrounding positions: fortunately this time, White has an ally in the lower right group: a white move at c threatens to link up there with the sequence White d, Black e, White f. Therefore White can work out a ko this way: 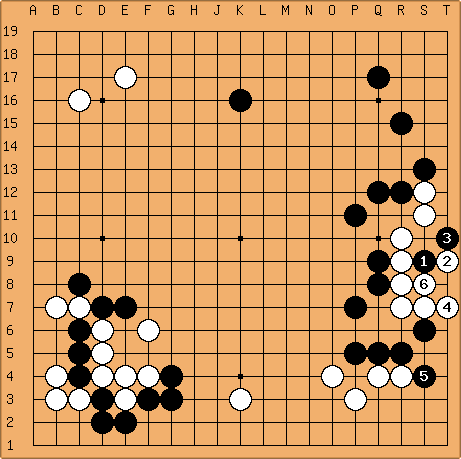 Needless to say, this is a picnic ko for Black, i.e. he risks very little (also because he gets to capture first), while White risks a lot.

Actually this is not the best sequence to get the ko: if White plays 4 at 6 she gets to capture first, which is obviously an improvement (see the actual development in the game of the Path not taken).

The sequence Joe believed could lead to a seki is probably this one:

JoeSeki Indeed it was what I thought was a seki. I saw the aji of c and thought that gave me enough time, either to escape to the bottom, or make a big enough space to get a seki. 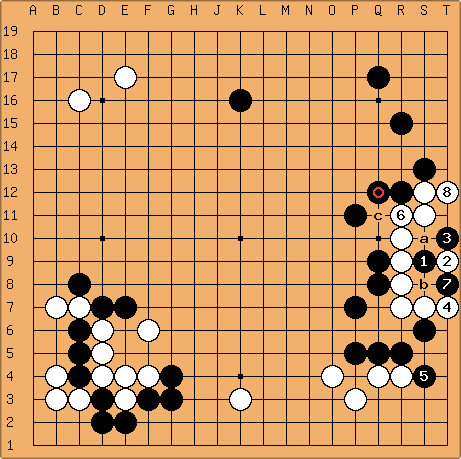 This may look like a seki, but it is not: Black has made an Eye in the belly of White's group: she cannot capture those stones or else she ends up with a space almost filled with a dead shape, while Black can always occupy all the external liberties, then play a and b to put the group in atari.
The move Black 51 (the marked stone) was played, not only to seal White in without any remaining aji (although I wonder whether it would have been better if it had been played a space below, at c...), but also to prevent White 6 from being sente: or else a seki would have indeed been possible by threatening to escape: 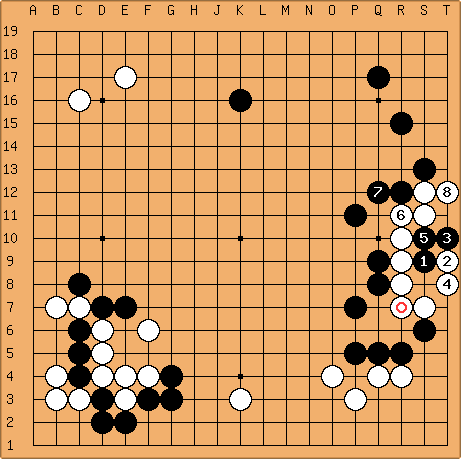 The problem of making life for this group could probably have been solved earlier by playing differently after I connected with the marked stone in the diagram below, by expanding the space starting at the other side:

Bill: The problem could have been avoided by not playing

) in the first place, and allowing White to be hemmed in. White's whole strategy on the right side was to make a live group (territory) instead of attacking Black's eyeless wall in the bottom right corner. The problem is a result of that pusillanimous play. 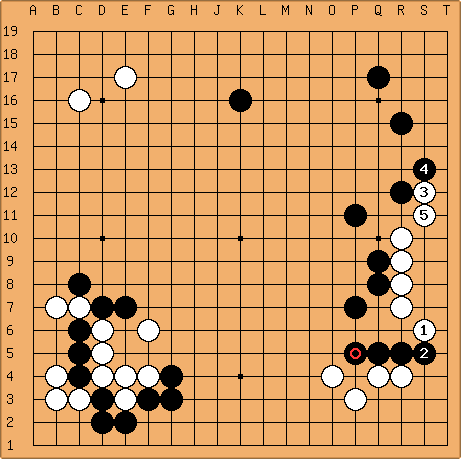 This should be alive, but this sequence has the drawback of Black 2, which weakens the lower right white corner.
It is also true that Black is full of holes on the upper right side ...