This page may be removed. This page is considered superfluous or obsolete and will be removed. If you object against removing this page, kindly remove the removal template from the page content, give an explanatory note in the summary and possibly improve the page or linkage to it, so that its purpose becomes clearer.
Reason: no use to call everything aji, here

enables forcing moves. it is illustrative for the confusion about the term and its use, but far from being a paradigm = an example you can learn proper use of the term from. remove or move? charles' second part looks like a proper example to me. 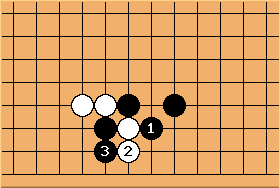 increases White's liberties and thereby creates more aji. White's stones are lost, but their potential can be fully exploited.

In this case, the aji will be exploited almost immediately, and as such this is not the best example of its lingering quality. 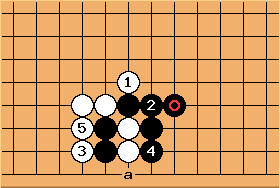 It is almost painful how Black has to answer White's moves if he is determined to capture the two white stones.

Here Black is forced to capture two stones that were dead already; White has used the aji of those two stones to form thickness on the outside (with no bad aji).

, making the opponent answer in one particular and expected way, oneself gaining something in the process, is called kikashi.

is comparatively small. At the time of

isn't on the diagram! It should be at a?

Bill: It was at a. See version 11. After my comment, the diagram was changed, but not the text ("forced to capture").

Skelley: White could even consider not playing

to take sente; the aji of atari on the two black stones remains in case of a black peep or push out.

instead, Black plays at

. Playing sente is like cashing a check or coupon before it expires. In this case the expiration date is soon, before 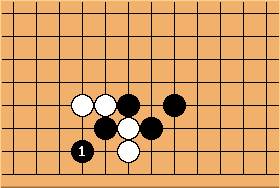 Charles Matthews In fact we can look again at this position.

is a standard idea to leave some aji in White's position. 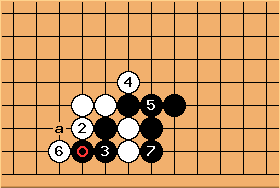 If now this, White has to worry about the cutting point at a. Since it may be slow to defend it immediately, it can remain as bad aji for White. 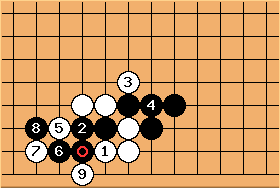 But White may not respond directly here. If White plays tenuki, Black has some bad aji that wasn't present in the initial diagram - for example the tactics in this diagram. Right now this doesn't lead anywhere for White, of course. But in combination with some other fight, this might become a serious possibility.

(Question: I'm curious why White shouldn't feel compelled to connect above 5, which is in atari. Or am I just obviously missing the point of the lesson? Answer: When black takes stone 5 white then plays to the left of 9 squeezing black. With lots of white support in the area this might work.)

Bill: A GoBase search reveals that, while the main line given on this page does occur in professional play, it is uncommon. The most popular line is shown in the next diagram.

stone has aji. Black threatens to capture two White stones. White often captures the Black stone right away, but not always. Note how the pros value making good shape over capturing a stone or two.