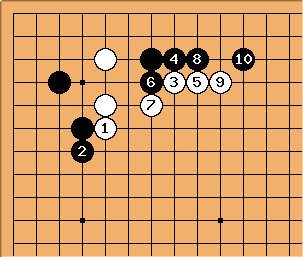 Running moves are fast but loose.

is an example of a running move.

Walking moves are slow but solid.

These concepts are included in the Korean word haengma 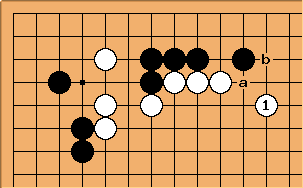 If White walks at a, black b walks ahead. That would be good for Black. Therefore,

in above diagram, is followed by another running move,

. When your opponant begins to run, you cannot allow them to get ahead.

Running also can mean running to freedom, usually to the center or to another side or toward friendly stones. There is a proverb: "Run before making eyes." By running, a group generates more liberties and becomes much harder to surround and kill before it can get eyes. Run with the one space jump (hard to cut) or diagonal connections or solid connections which can't be cut, but not the knight's move, which can be cut: "Ikken tobi is never wrong".