Shinogi generally means "bearing" or "holding up" in Japanese. It is also a Japanese go term adopted into English. It means parrying an attack. For example, when the opponent makes a play that carries a dual threat, finding a defense for both threats is shinogi. This technique can be part of a strategy, referred to as shinogi-strategy or amashi, where you take territory and let your opponent make a huge moyo, which you hope is big enough for you to live in. shinogi does not just mean making life under pressure, it has a general meaning of skillful defense under pressure. For example it is used in verb form (shinogu) to describe a player, who is behind in a match, winning a kadoban game.

The professional player par excellence associated with this strategy is Cho Chikun. In the eighties and early nineties, many of his title games were played against Takemiya Masaki, who is the epitome of the influence-oriented player. The outcome of those games mostly hung on whether or not Cho managed to make a living group inside Takemiya's moyo.

Iago: This seems very interesting, but how do we know if it's big enough ? And how do we do it ? Any examples around? I made an attempt on the border, but it is more a bunch of questions right now: size and safety of territory.

Charles That's not the usual meaning of shinogi:

Shinogi is avoiding death skilfully, often with a big dragon, by a process of making life while not damaging one's other groups or territory too seriously;

Bill: In ordinary parlance, shinogi means pulling through. Stones make shinogi when under pressure or attack.

In his Igo Master Class (達人囲碁指南) series, vol. 4, Master of Shinogi, p. 40, Cho Chikun says that shinogi does not just mean making life under pressure, it means parrying an attack. For example, when the opponent makes a play that carries a dual threat, finding a defense for both threats is shinogi. 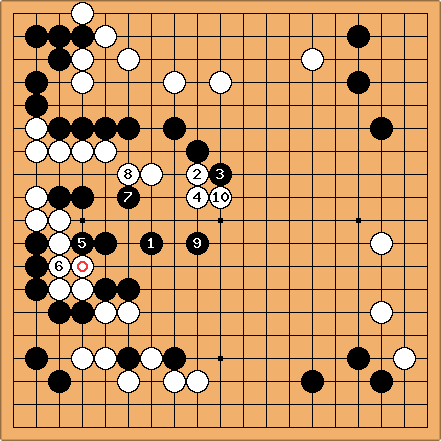 , saving two stones and threatening five Black stones in the left center. Black could sacrifice these stones, but elects to save them. 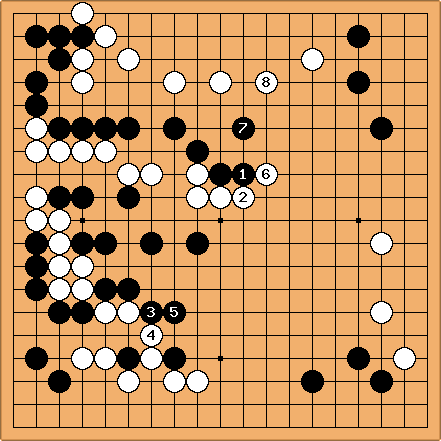 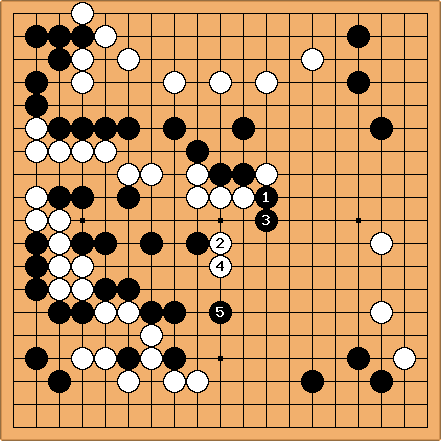 Black is strong enough to cut at

pushes out into the center. Black has no worries about the life of his group in the left center.