Attachment on the second line

Once Black attaches at

, two common responses for White are a and b.

is a solid line of play. Black gets additional territory and White gets solidity facing the right hand side.

This works well for White when White has stones to the right at a or b. White stones closer than that would yield an overconcentrated shape.

Alex Weldon: If the White stone is much closer (say at c, especially if the ladder towards the upper right is good), or if Black is playing this too early in the game, and White is willing to play lightly, it may be possible to omit

. This would make the sequence gote for Black.

If White chooses to capture

with the hane at

to complete the capture of

Black will then roll over top of White with

. Black obtains outside thickness, while White gains some territory. For White to resist

there herself is inconsistent with

Velobici: Such is this 10k's understanding. Please correct my errors and enrich this page.

Charles I saw a 4 dan and a 7 dan discuss this, last year. The 4 dan said he'd automatically play

above; the 7 dan commented that the 4 dan needed to change his entire attitude to the game. So, who am I to comment?

Actually, this is one of the most basic middlegame joseki. Even so, you have to look at crawl lines to understand the local tactics.

Black has several choices: at a, at b and possibly some ways to fight out with

If Black avoids complications, up to

Clearly here White has played in a territorial way, and Black has gained in influence.

Bill: So far, this is one of those discussions that does not take the context into account. (However, see below.) Often this attachment is a sabaki or shinogi play; it may also be a good yose. This second line attachment would be bad on an otherwise empty board.

Bill: For instance, through

Black is too low. 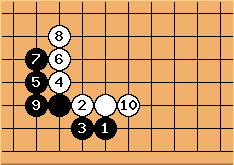 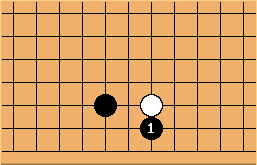 Bill: I did a little database searching on GoBase, and no instances of this pattern showed up. You have to have other stones in the vicinty for the pros to play

Bill: The database guys can check this out, but one of the commonest situations where this attachment occurs is as a defense when

Bill: Another common use for this play is as kikashi against Black's corner enclosure. The clamp at

also occurs frequently in other contexts, especially where White wants to play lightly. 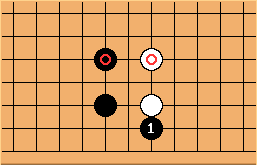 unkx80: This second line attachment is also commonly seen when there is a

one-space jump stone, and can be a very big early endgame move. 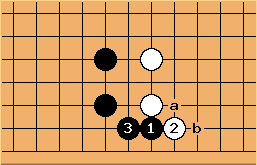 gains a substantial amount of territory. Later, Black can aim for a or b, which may cause

to immediately patch up this weakness, allowing Black to gain sente. 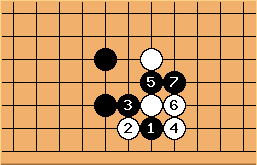 can push into White's territory on the right. Whether Black's sacrifice of

is properly compensated by the breaking in by

depends on the wider context.

This contact play technique is particularly useful for making shape for cramped groups on the side. It is quite common to reinforce the two-space extension. 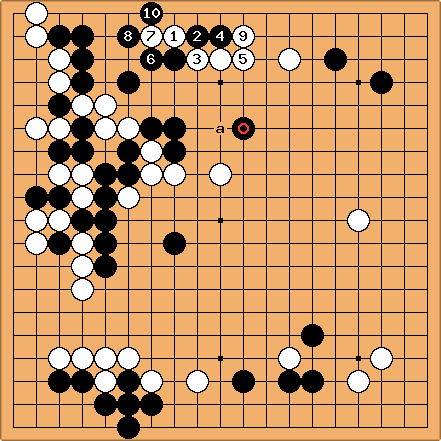 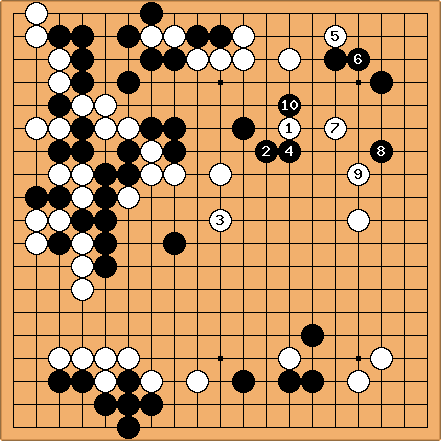 . This time Black answers solidly with

, to keep up the attack. 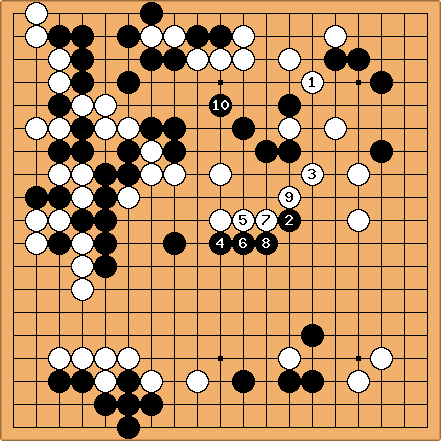 strengthens the centre. Here attack and defence are well balanced.