Semedori is a situation where a player will be forced to capture a group of stones when her opponent fills dame.

Sometimes, this is the result of middle game fighting, at other times it is an endgame technique, where you add a cut or remove eyes so that some part of an opponent's group is in long term danger.

In the example to the left,

makes sure that black cannot make an eye. That means that Black will, at some point in the future, have to capture the

marked white stones, otherwise White can create seki. Note that there is no urgency to make the plays, as white cannot play b without first playing at a. When White plays a, Black will have to play one of the circled points to avoid seki. Had black played at

, he would have created an eye, and the two circled points would have been his territory. These two points are the additional gain of the semedori here for White.

In this example, if Black plays first at a, he makes a point there and has eleven points. If instead White plays at a, he has placed Black into semedori, forcing him to eventually capture and remove the three circled white stones and reducing his territory to eight points. In addition, White has defended the left side in sente. Thus this play at a is much bigger than it might look at first glance. In a real game, forcing a semedori could be worth even more, depending on the number of liberties the group that you force the other side to capture has. 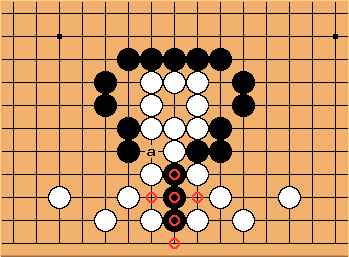 Another example, albeit highly contrived. White is alive, of course, and the

stones are dead, but if Black plays at a, since the upper group has only one eye, the result is a semedori situation requiring White eventually, once Black fills the surrounding liberties, to play three extra moves inside his own territory, at the marked points, to capture and remove the 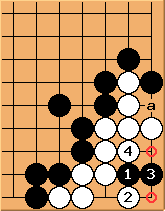 Although semedori could be created by a crafty tesuji, more often it's a result of a complex middle-game battle. And because semedori often arises in the endgame, some assume it is an endgame-specific phenomenon, but actually it can occur at any point in the game (although normally the stones will not need to be removed until late in the game, as dame points are filled).

But here is an example that is an endgame semedori-based tesuji, from StrangeEndings. Black can reduce White's corner in sente using the semedori principle, by playing

here to prevent a ko.) White has to fill at the marked points and eventually capture and remove

See /Discussion, much of which has now been reflected in this page.