In fact this formation on the side can be considered rare in pro games.

One place it does occur is in relation with the large low enclosure, which is insecure in the corner. When

is played as a checking extension against

, Black is thinking hard about the aji in the left corner.

I started a rec.games.go thread a little while ago based on this sort of example: 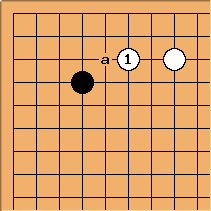 The question being whether one could argue convincingly for Black tenuki next, or Black's diagonal attachment at a. It's more complex than that, if you look at real data.

A tactical example that impressed me. 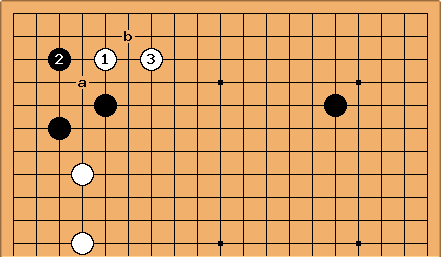 Simple? Nothing is really simple when your opponent plays the 5-5 point. This is Matthew Macfadyen 6d - Zhang Shutai 7d from game 4 of the 1995 British Championship. The choice of

is presumably all to do with preserving the chance of White at a against Black at b. Don't think I'd have found this one.

JF How do we know who's Black and White? Is there an SL convention? FWIW I always put W first.

PS There is a Japanese name for the short extension on the side: Honinbo's ikken tobi.