An invasion is a play made inside an enemy extension or framework with the intention of living, escaping, or sacrificing. By living or escaping, the invader deny the opponent of large territory, and may attack one or both of his stones. 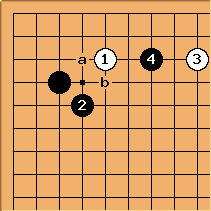 If after Black's kosumi

White makes a three-space extension to

, with the idea of having a good shape after the Black a-White b, exchange, Black instead plays an invasion

See also 3453Enclosure43Invasion, Invasions on the side and 3-3 Point Invasion.

Invasions occur throughout the game.

The difference between the second and third cases is that invasions in the middle game phase may create weak groups; which have no place in the endgame, where everything in theory is already settled in status and there is nowhere much to run.

A number of middlegame joseki exist for invasions into simple extensions and positions resulting from common "regular" (opening) joseki, but choosing the best point to invade often requires a fair bit of reading and positional analysis.

Some examples from games

Nick Sibicky 4d has a video lecture on invasions which was useful to me (13k):