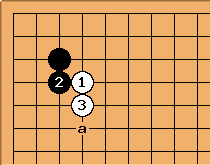 The shoulder hit of

is a common way of playing against the black stone in the corner. Black will almost always answer with the basic technique of pushing at

(see which way to push) and White will mostly stretch at

. Jumping to a instead is treated below.

tenuki, see [2]: these are poor plays. For tenuki after one more play by Black, see 3-3 point shoulder hit, tenuki variations.

Black's keima slide is the most common move.

It is clear that in this joseki, White is making outside influence, while Black goes for the corner territory. Next, the jump at a, continuing to emphasize the outside, is White's most common move. White can block at b, taking the left side, which is also discussed further. White can play tenuki and regard the white stones here as kikashi. GoBase shows some examples of professional games where c to e were tried. 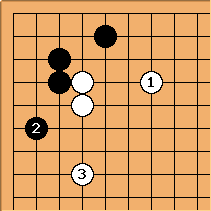 next makes nice shape as well, but it may be too slow, so White will often play tenuki instead. For that reason,

can also be omitted, giving Black the first chance to play elsewhere. 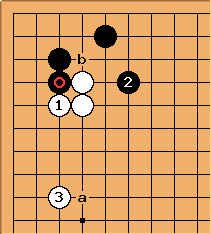 The white blocking move at

gives up White's quest for central influence, and focuses on the left side instead.

is the natural response, playing in the direction White neglected to play.

After White stabilizes the group by the extension to

or a, the joseki comes to an end. Black should take this joseki into account when choosing between

and b: it is often correct to play on the side where blocking with 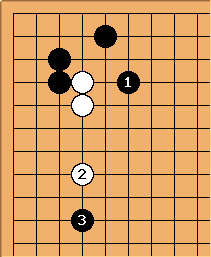 If Black gets to be the first to play in this corner after the basic joseki, Black will almost invariably choose

. The white stones jump to safety with

, after which Black plays at

to deny White an easy base.

White, however, can also choose to ignore

and leave the stones to themselves: even if they are captured, Black will have to use so many moves to do so that it is not in all positions disadvantageous for White. 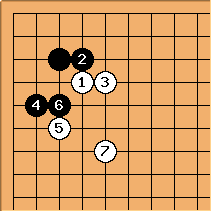 as a mistake. However, there are 30+ pro games on GoBase with this move. Many of them have special surrounding positions that make this move reasonable. When the position around this corner is fairly open, the pros generally play as in this diagram.

Black's turn may be a natural one to occur to many players. In fact, it is not wrong and White must be very careful responding.

Timm: What do a and b correspond to ?!

is a mistake and

puts in on the spot.

If White resists, the cut at

favours Black. If White submits with 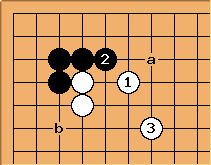 to keep up with the exchange of central influence for territory. 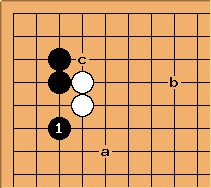 is rarely seen, with answers at a to c. 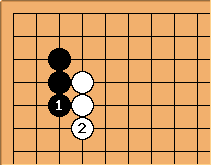 is considered slow as it pushes from behind. Therefore it is not joseki. However, depending on the context this can be a good choice.

One example from BQM87: 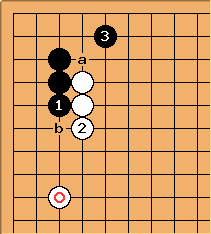 is in place, it makes sense to play 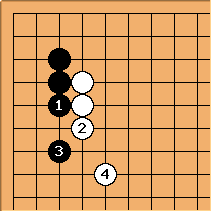 The common continuation in this pushing battle. White's influence is bigger than in the joseki. Black's marginal increase of territory may be inferior to that gain. 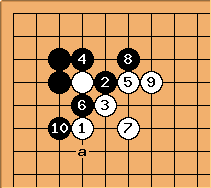 White 11 plays at a and exchanges a big black territory for thick influence in the center.

can also defend tightly instead of a tiger shape. For

, a peep has been played instead. 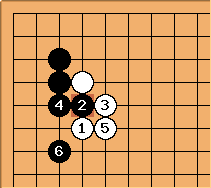 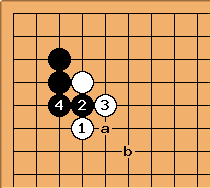 , White sometimes leaves the situation for a while treating the stones as kikashi.

(Charles: Tenuki here is unusual. White normally plays a or b immediately. See screening kikashi for an example of tenuki.) 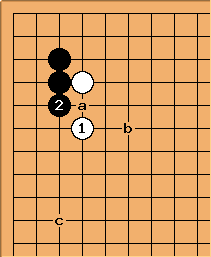 Quite a few pro games feature this

. You would expect White to answer at a, making Black push from behind, but this is not the case.

because there is a need to play lightly. Playing

at a would not be in accordance with this need.

was at b, which even I would have played. In that game Black had a stone at c. 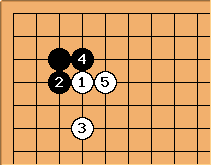 here, rather than the normal clamp at

, this transposes to a line seen earlier.

Played by Otake and Yu Ch'ang-hyeok - so not really a negligible possibility. -- Charles.

tenuki, the position reverts to a 3-3 point invasion. This makes so much difference that it is hard to imagine Black playing this way, in the opening, unless

was a ko threat or ladder-breaker.

Imagist: In a Go Winds I saw a few months back, the shoulder hit/ladder breaker combination at

was referred to as "unbearable". Kato Masao (colors reversed) took (what looked to me like) a large loss locally to avoid the ladder pointing at his 3-3 point, so this is pretty huge.

makes matters worse for White than not approaching this position at all.

Bill: Well, there is this tewari consideration:

seems to be too close,

Dieter: I disagree, so there is an opportunity to learn something for me here. To me,