Charles: (...This issue is) a very big one. Anyone with a well-developed sense of what we mean by context for joseki is probably quite strong (amateur dan level) already. The joseki choice question seems to be fundamental: when you know some good sequences from a local point of view, how do you recognise how they 'fit' into the board position? I have been sceptical in the past about problems at the level of The Great Joseki Debates; Whole Board Thinking in Joseki, which is systematic, can tell you more. A good exposition of 'context' in go would be an excellent book. 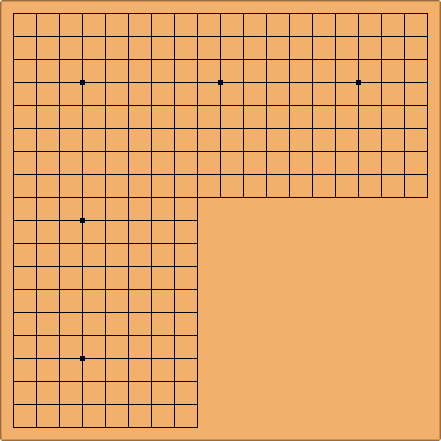 Assuming a joseki will be played out in the lower right corner, we can take out a 10x10 sub-board there and wonder about all the factors in the remaining gnomon (L-shape) that could affect it.

The most usual ideas come down to saying that the adjacent corners matter most. 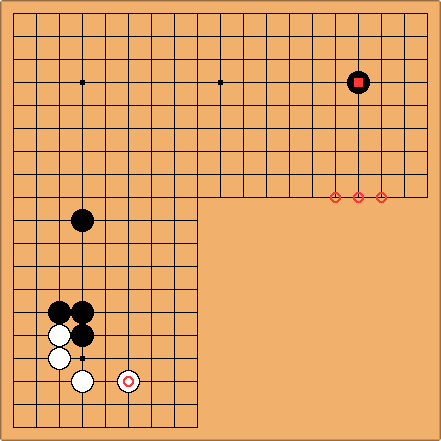 For example these adjacent formations have implications: the presence of

(low and solid) means that any influence Black builds along the lower side may go to waste. On the other hand a joseki result that gives White a weak group developing towards the circled point is likely to be good for Black in expanding a framework based on 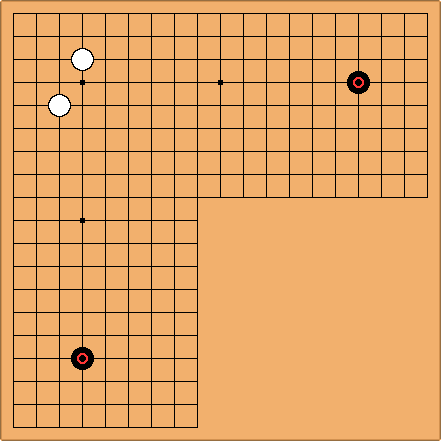 In the case of this cross-hoshi formation, you can therefore predict that Black will want to play fighting joseki in the lower right: the appearance of weak white groups anywhere along the bottom or right sides should favour him.

This kind of reasoning goes one step beyond side patterns. I actually think one should probably study side patterns first, at least until the urgency of plays considered on a whole-side basis becomes reasonably clear. That might be just as important as joseki study.

Context clearly does include any relevant long ladders (which will relate to the diagonally-opposite corners). Normally ko threats aren't required in corner openings, but in middlegame joseki they definitely matter. (Context for middlegame joseki can involve just about any aspect of strategy.)