A form of pushing battle where one player is pushing the other ahead, considered disadvantageous for the player pushing from behind. If you find yourself in a situation where you are tempted to push from behind, you should consider alternatives.

-etc is pushing white from behind. In general this pattern is not good for black. If black continues, white is constantly ahead of him, and may choose to bend around (hane) on the front of black's stones (eg:

at a instead). If black plays elsewhere (tenuki) after

, white can follow up at a with a devastating bend.

is better, jumping ahead. Now

are pushing from behind, and maybe black will hane in front.

, however, is that white will cut like this. Whether this is possible depends on the surroundings (eg: is the edge of the board nearby?)

If you think that the cut is too dangerous, you can play the knight's move jump of

Even with the knight's move, white can still cut. But this cut is much weaker than the previous one. In the previous cut diagram,

were separated in three groups. Here

are connected, so black only has two groups to worry about (

If even the cut from the above diagram is too much for your position, then you are truly in a weak situation, and perhaps there is nothing for it but to push from behind (sometimes bad moves are your only option). Under some circumstances, pushing from behind for another move or two will lead to more favorable outcomes from a jump or knight's move. At left white has played a bend at the head of three stones, which is easier for black to defend than a bend at the head of two stones and gives black more tactical options, including the ladder at a. 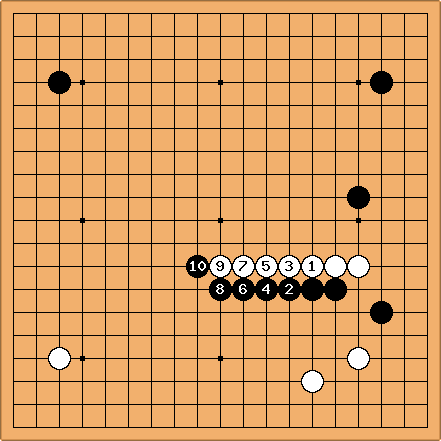 are an extreme example of pushing from behind. The Japanese term translates as pushing the cart from behind--indicating that something is wrong, since in Japan carts are normally pulled, not pushed.