I was toying with this thought in the subway on the way to work today. I can't find it in any of the really damn big online joseki dictionaries which claim they also have some trick plays. Is anyone familiar with this? If not, can anyone read out any joseki variations? Or is it possible for White to always come out ahead here? It seems very easy for either player to make a mistake and end up worse off.[1] --BlueWyvern 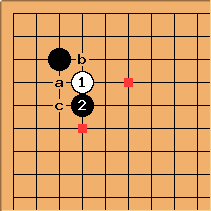 The aim of the shoulder hit is to take advantage of Black's low position and to keep them low and not gain any influence.

If keeping the 3-3 stone down is not a huge concern, an approach at one of the marked points might be considered instead, depending on the situation on the board. The standard response to

would be at a or b. The response at

leaves some issues as far as I can see. A white play at b or c is obviously out of the question, as they would lead to instant bad results. The only decent response that I can see so far is for a white play at a. 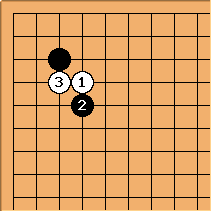 I hope you don't mind my strong language here, but

is a ripped keima, definitely a big no-no, allowing

to split the two black stones. Now the two lone black stones are pressed against White's wall, and if Black tries to save either of the stones, he will hurt the other stone.

My Weiqi coaches in my Weiqi Association have put this very strongly across to his students (I was one then), and I will reiterate it here again. Moves you play should not cause your surrounding stones/groups to suffer.

Make fewer such moves, and your strength will increase greatly.

Charles At six good and six bad shapes, this is the first of the bad shapes. See the split shape page.

I understand the general principle described above, but I was also under the impression that you can always break principles if you have a reason. My reasons for breaking this basic tenet are as follows. Perhaps they are faulty reasons, I don't know.

I'm going to give the situation a little more consideration to find the best example. Sorry for being a stubborn weaker player, I'd just like to be shown more thoroughly why I am wrong, otherwise, I don't really learn. I'm not convinced "such and such a move violates this basic principle" is enough to show that the move is wrong for all situations. --BlueWyvern

Here is an example. 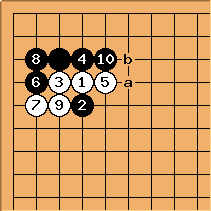 It seems to me that Black can force this sequence. My thinking is that this could be a favorable position in some situations.

and brings Black's position up to the fourth line at the same time. Depending on the circumstances, the threat of Black a could allow Black to end in sente. To leave this position, White may have to play at a. White could play at b as well, depending on the surrounding situations and whether a cut at a could cause some complications. Aside from this, Black has had the advantage of picking the direction of the wall, and may be able to use the threat of rescue to complete the sacrifice of

in some meaningful way. 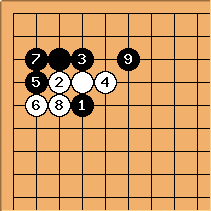 This is the original sequence suggested by BlueWyvern. 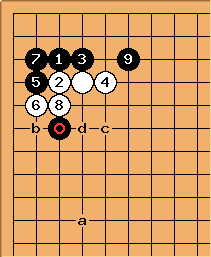 This is a joseki. More often than not, there is a white stone at around a.

The only difference between the two variations is the position of

is totally useless - it has no value remaining at all. In Variation 2,

still has the chance to perform counter-attacks at b or c (even with the presence of a white stone around a), so it may be necessary for White to defend at d at a later stage of the game.

This proves that Black playing at

in Variation 1 is not good.

I hope that this helps, and please pardon my language in my first posting in this page. I guess my emotions got the better of me. Please feel free to post more questions or comments, they are welcome. =)

BillSpight: Divide and conquer is a good rule. 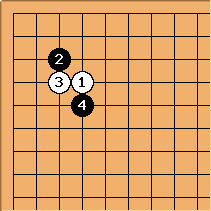 In your original diagram each player has made two plays. Suppose White had gone first, as here. After

would Black play at

Anonymous: This reverses the order of play and gives white sente - this diagram is absolutely terrible for black.

In go, the closer together the two stones that are divided, the more severe the play that divides them (small gaps). Here you have the most severe division possible.
You want your stones to work together. Here they cannot co-operate very well.

There is a further problem with your suggested variations. 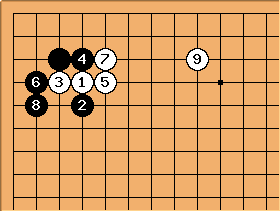 White does not need to answer the hane of

, but can play the magari 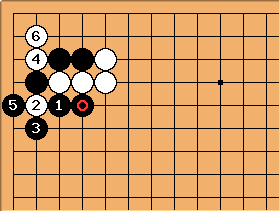 , White can cut with

. White takes the corner and 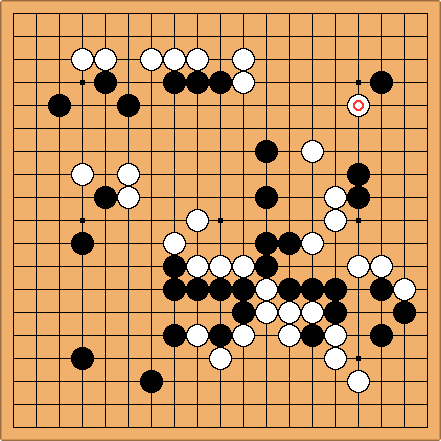 . What is Black's next play?

The answer is /Just Kidding

Sorry, I saw this today in Kato's Chuban Sen no Koubou on the subway going to work and couldn't resist!

This is very funny, Dave - it just goes to show that your plays always have to take the global situation into account. The only thing you have to remember is to try to make the trades favourable to yourself, or as Go Seigen said 'Give a little, take a lot..' This is my favourite proverb, because it is the only one that can be applied in all situations on the Go Board! 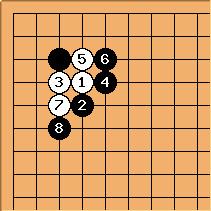 Bob Myers: This position does lead to some interesting hamete. I myself went through a period of playing

here. The key follow-up is

. Self-study question: What is White's alternative for 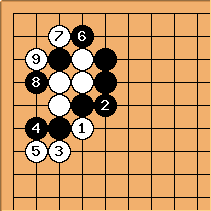 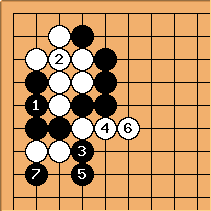 I must admit however that after further thought and consideration, a lot of what I came up with this morning seems very stupid and was probably due to a lack of sleep, which incidentally, has similar physiological effects as alcohol. :-) As a results, I think I'll trash this page if no one has anything profound to say in the next couple of days. --BlueWyvern

DaveSigaty: It is good to have second thoughts, third and fourth as well! It is also good to think for yourself and have the energy and self confidence to raise your hand and say, "Hey, what about this?" The good thing about a wiki is that if you write something dumb you can change your mind and remove it. The bad thing is that removing things might become a habit followed by not posting at all :-( Don't let the loud opinions here blunt your enthusiasm. Basically you should not think about "trashing" a page. Once one other person has posted in reply to your question, you share the page, it is not yours anymore - that is the fundamental nature of a wiki. Feel free to edit your opinions and even wiki master edit the whole page. Just make sure you understand all the contents if you tackle a master edit :-)