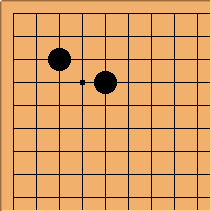 This enclosure is common in pro play, to develop the 3-3 point (preventing the 3-3 point shoulderhit). If the 5-4 point is played first, it looks unambitious[1] to take the 3-3 point rather than make the small high shimari; and that development is rare in pro games. 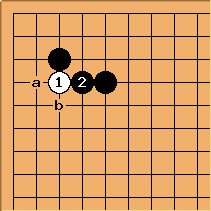 is the joseki answer most used in practice, but a and b are also seen. Note that this position also occurs in a typical 5-4 point tenuki joseki, by transposition. 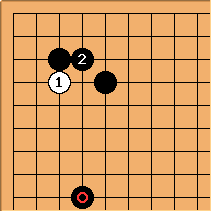 in answer is rare, but has been played by Ishida Yoshio (1982-11-25 against Iwata Tatsuaki). In that game Black had the marked stone in place. In general the exchange

looks like Black being forced (kikasare). This formation occurs also with the 3445 enclosure. 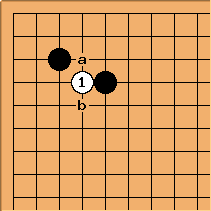 here would only be played as a ko threat. Even then it is rare (one example in the Kajiwara-Kitani game in The Direction of Play). If Black answered at a that would be a local loss for White (i.e. the threat could be considered loss-making); in particular because the chance to play the probe discussed above is now gone.

Bill Spight suggests Black at b as alternate answer (since Black at a feels like kikasare).

It seems, though, that between strong players

will only be played when it is a ko threat that Black can't afford to answer; when White will cut through. 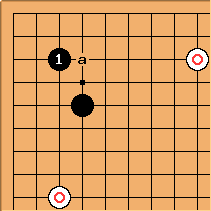 From a game Rui Naiwei-Hua Xueming in 1978. Black played

to secure the corner (rather than a) because White already occupied the 9-3 and 3-9 points.