mAsterdam: At 3-3 point shoulder hit there is this piece: 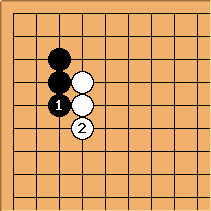 Another stretch at 1 is considered slow as it pushes from behind. Therefore it is not joseki. However, depending on the global position this can be a good choice.

However, depending on the global position this can be a good choice.

I am sure it is not meant this way, but it reads like "There is more to this. I am not going to tell the morons, but, dearest in-the-know-just-like-me-friends, I do know." This is not written for the person who is trying to gain knowledge. This is a type of advice that really gets me angry when I see it in a book, and I see it in go books much too often. But ... this is senseis, and that means I can just ask a more knowledgeable author to add the lacking "for example, if ...". Can't I? I think I just did.

Charles Matthews On the particular question: 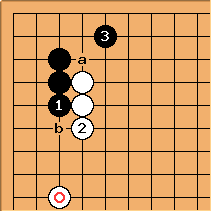 When there is this white stone in place, it makes sense to play 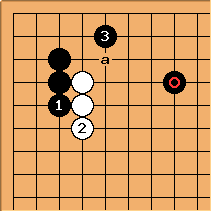 How about crawling in a situation like this, where there are black stones placed to minimize the influence of the growing white wall? Is it worthwhile for Black to continue crawling? - Fhayashi

at a? A bit crude, but you might want to consider connecting with

Charles There are few pro examples for this 3384 formation; in Hane Yasumasa-Cho Chikun 1986-08-21 Black played directly at

dnerra: Just to elaborate a bit on what unkx80 meant by crude (in the spirit of this page...): 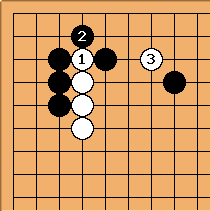 Black's shape is nothing of beauty, and certainly not connected. I think that omitting the

exchange above, as reported by Charles, makes it more difficult for white to play like that. 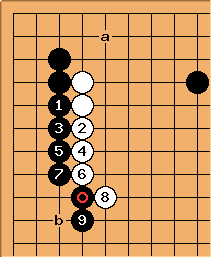 Andre Engels: I found two professional games where this move was played. In both cases the

stone was present. This is the follow-up of Sakata Eio against Fujisawa Shuko, 1963 Meijin match. In the other game (Fujisawa Hosai against Ishida Yoshio, occasion unknown),

was played at a, followed by

The presence of the

stone means that Black knows he will be able to get ahead and move up one line in the future, so pushing from behind is less of a problem. Apparently the position of

in place, while in all games where it is at 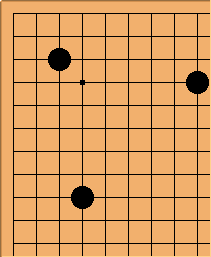 Dieter: It's hardly surprising André found only two games. The initial position is one where White has two wide extensions from the 3-3 point. Probably both were part of some side pattern, but anyway, Guo Juan gave me a severe warning against this. 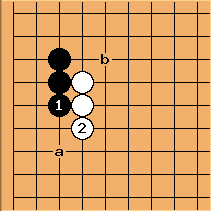 Or perhaps black is making miai of jumping ahead to a or b. ~srn347

On the general issue: it's a very big one. Comment moved to joseki context.

There is more to this. I am not going to tell the morons, but, dearest in-the-know-just-like-me-friends, I do know.

I was the one making the allegedly arrogant remark. What I meant was: "This is considered slow, but it is not a mistake in the sense that it is never playable. Depending on the global context it is certainly worth considering." And I do not at all claim that I know which circumstances allow the move and which don't. I just want to warn against automatic play.

Charles I know what mAsterdam meant; unfortunately the only way not to be annoyed by joseki books is not to read them. Here on SL we can use hypertext to add large numbers of notes; but still not enough, probably.

mAsterdam To both Dieter and Charles: Thank you very much for your answers. Maybe stating the obvious: My grumble was meant as a little wake-up call. I did not want to offend the author, in this case Dieter. I really do understand that the way I read the remark does not reflect the author's intentions. I made that type of side-remark while explaning things (not go :-) many times until I realized what the effect could be. Now I try to either define a topic or not, and only hint at something vague when there should be a sequel. Hyperlinks to the rescue! I will edit the text at 3-3 point shoulder hit. I hope I'm doing it right. 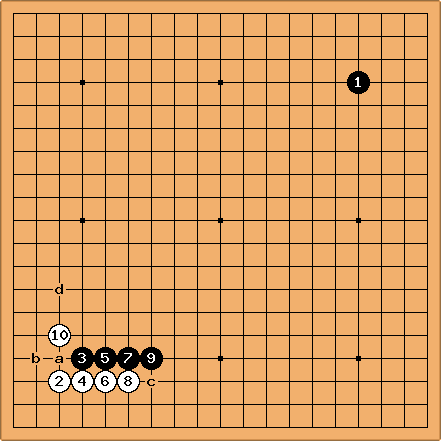 Andy: I ran into this recently as black. I figure it's fine to let white push from behind and

certainly looks crude but not obviously wrong. How best to proceed now? I went with a b c but wasn't totally thrilled with how it turned out. I'd appreciate any better ideas.

Andy: Is the a-b exchange an example of a small play for your opponent is also small for you?

Herman: I think it's more an example of aji keshi. Perhaps, if black gets a stone at d, the ove at b becomes the right move later for black.

Andy: Thanks Bill, Herman. We played the rematch today on KGS, he tried the same opening and he got crushed. :)