Playing a shoulder-hit against a wedge in the mini-chinese is a common strategy. However, it is interesting to me that pros will rarely play

in the following example, although I've seen this in games of strong amateurs, perhaps because this is a standard shape following a shoulder-hit. Pros almost always play a hane at a instead (57 times out of 58 in my version of GoGoD) which would not occur to me since the ideas from the 3-3 point joseki are perhaps too ingrained in my mind. Perhaps this is an example of joseki as a source of bad habits?

white can continue pushing at a or slide at b and if black tries to seal in white, the wall black builds as a result will be overconcentrated with respect to the marked black stone on the lower side. But that's the speculation of a very weak player, and after reviewing more games, I think that's it's wrong because black sometimes builds a wall even after the hane. Is there a better refutation of

? Or is it actually not bad? Thanks. Calvin 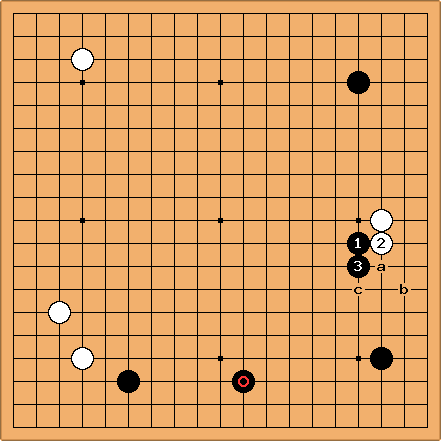 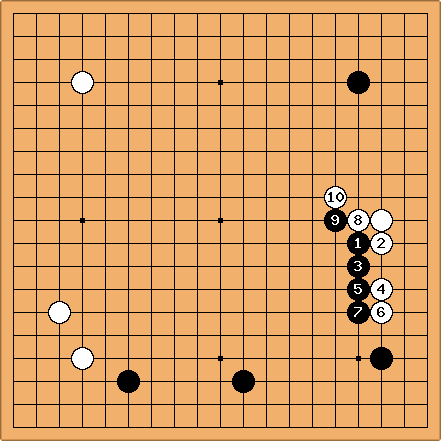 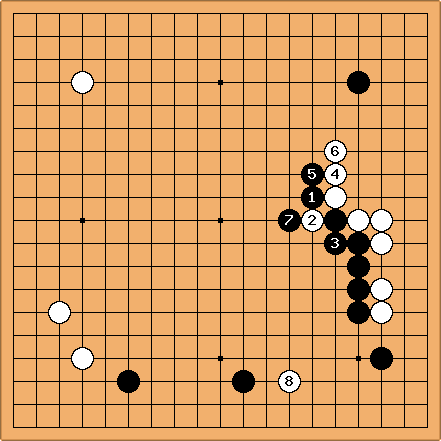 Let me rephrase the question.

in the original diagram is a normal move. I like to try to understand normal moves, and therefore like to understand when they might not work well. This context is one of those in which black prefers to hane against the two stones rather than extending and leaving no cutting point (or jumping lightly at c, for that matter) so I wanted to understand the idea there.

Maybe I should have asked: why

in the first place? It is not a reduction play, because white has no moyo here. The plan must be to build a position for black's moyo on the bottom, at the expense of strengthening white slightly on the side. In that case, maybe I see the hane. Calvin

Viewing a Profound Issue - Through a Glass Darkly

Dave: You have asked a fundamental and profound question, Calvin. Let me take a stab at answering it - basically with more questions. I think that essentially you are asking why is modern fuseki played the way it is at the professional level. Needless to say, I do not know since I can not play at that level :-) Nevertheless in the best tradition of amateurs in every game and sport on earth, that does not prevent me from having my own opinons! 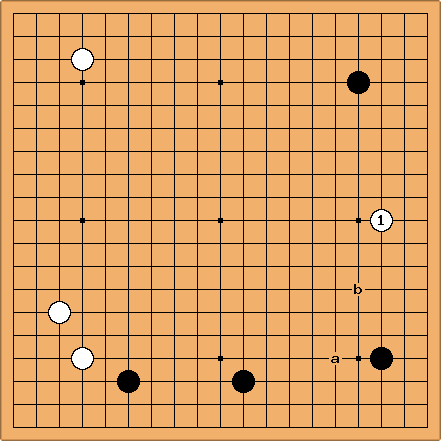 To begin with why does White play 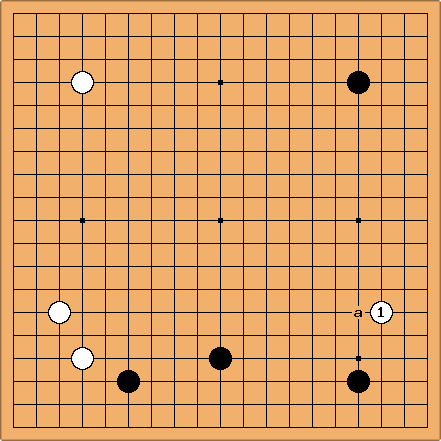 Alternatively if we look at the Kobayashi fuseki, why has virtually all the experience been with a White approach move against the lower corner (either 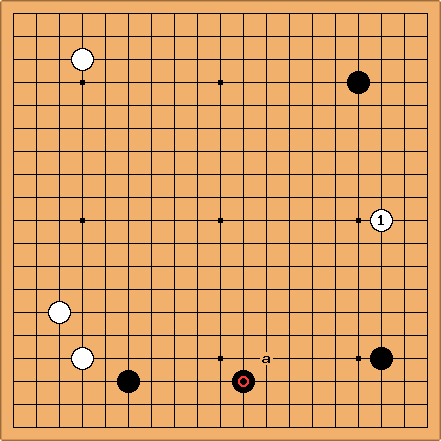 In the mini-Chinese Black creates a low, fighting formation. He invites White to enter his area of influence and fight it out. However, although the distinctive part of the formation is along the bottom, the wider area is along the right side. Compared to the regular Chinese, the bottom potential is limited because White, not Black, holds the bottom left corner. In addition, the marked Black stone is low so White can reasonably plan on being able to play the shoulder hit at a to reduce the bottom unless Black invests another stone to prevent it. The result of all these considerations is that

seems a quite natural choice that refuses to go along with Black's plan.

(By comparison, the formation in the Kobayashi is higher and better suited to building a framework. White has to be more concerned about what the bottom will turn into if she avoids the lower right. At the same time the lower right corner is easier to approach so normally White does, although cautiously.)

So does Black give up? Not at all. Black does not calmly go around the board dividing it up with White. Instead Black sets out to pressure the White stone and at the same time build up a framework along the bottom until White has to take measures to reduce it. Sooner or later Black gets the fight he is seeking. 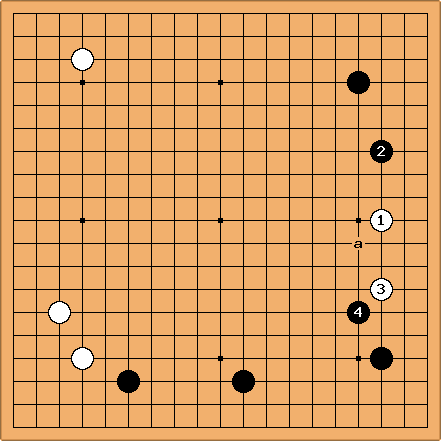 or a. This is building the bottom on a smaller scale but Black has compensation in the upper right corner to offset it. 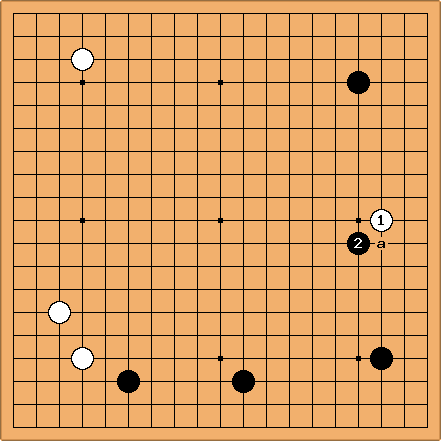 The shoulder hit at

and the attachment directly at a came into common practice roughly together around 2001. Both are obviously more directly oriented toward the bottom. Obviously the upper right will suffer if White builds a wall facing toward the top. Black hopes that the compensation from the larger bottom right will be sufficient. The play at a has turned out to be less popular that

. The attachment at a may simply be too hard to control from Black's point of view. 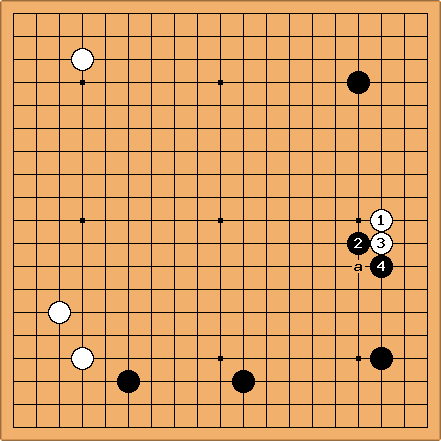 Finally, for the big question of why do they play

Bill: Question, Dave: How often do the pros cut at a? If not, isn't it because then

is not so good in this situation, despite the proverb? If White is not going to cut at a, then

looks good, right? Charles Seems this has only been tried by Chinese players, about three years ago.[1] 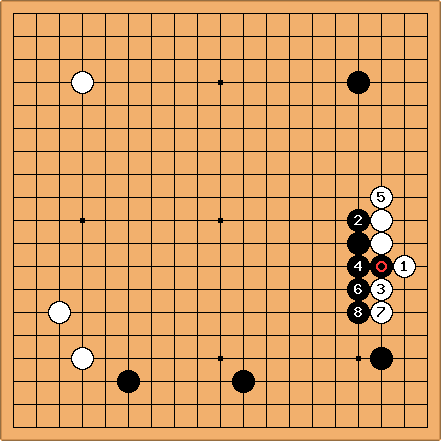 This is a very common continuation. At this point White plays away from the right side and invades or reduces somewhere along the the bottom and the real fighting begins. Aren't we amateurs normally taught that the exchange of the marked stone for

is a bad forcing play by Black? Don't these 9p title contenders know the basics? :-(

[1] Continuation after the cut. Roughly what I guessed, in fact. 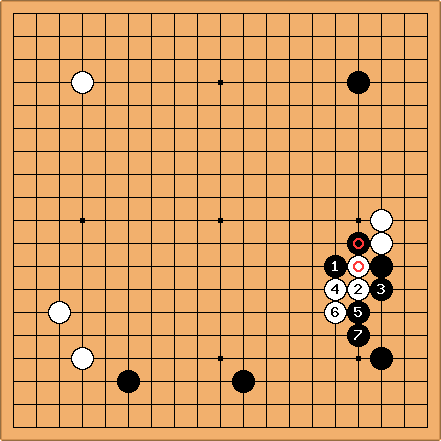 This sort of thing, up to

. At this point Black can afford to treat the outside stones

lightly, since the corner looks like becoming large and quite secure. Charles

Dtm? Would anyone care to offer some speculation as to the thematic differences in the shoulder hit continuations against the wedge? In the case of the wedge i would think that the outside wall that black would gain would work more efficiently with the corner enclosure on the bottom right, but perhaps only with a

at a rather than the hane as shown here. The continuation after the cut shown in the previous diagram lacks the potential to develop a large bottom territory for black without the bottom extension at the key points of b and c. 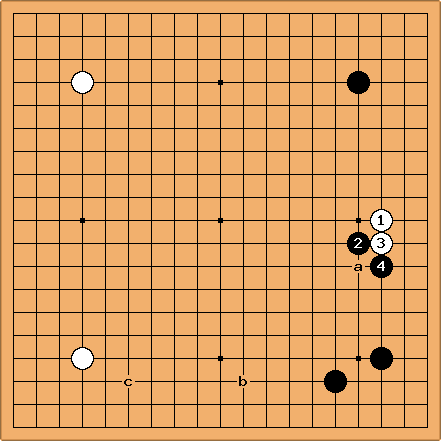