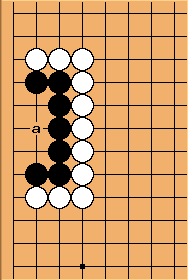 The rule for a three space notcher is either "Four die, Six live" or "Five is unsettled". Verify for yourself that Black can live and White can kill by playing at a in the diagram. For this reason a is called the vital point of this formation.

See notchers for the coding.

Even if Black takes the vital point at 1, White first destroys eyeshape, then makes miai of a and b. With one of his weak spots occupied by White, the black group's eyespace is almost filled with three in a row.

Black still needs to play at 1 to make life.