A cap is a move above the opponent's stone, usually at a distance of one space. It is a common move for reducing a framework or for attacking a weak group. It can be seen as the counterpart of the one point jump. 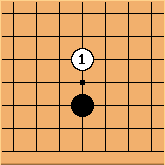