Cosmic Go: A Guide to Four-Stone Handicap Games is a book written by Sangit Chatterjee and Yang Huiren and published by Kiseido in 1999, with catalog number K69.

There is another book called Cosmic Go, which was written by Takemiya Masaki; its English translation was first published in 2022.

Chapter One - The Breakdown of the Gates of Heaven 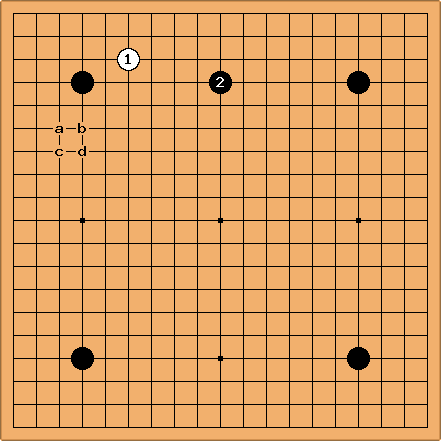 has been answered with a three-space high pincer at

. We will consider the white counter-pincers at each of the four points from a to d. If Black fights with an unyielding attitude, the worst White can do is to lead the game in a violent direction. But don't let this scare you! The truth is that if you play severily at the beginning of a handicap game and can come out with a 50-50 result, you will have an easy game. Of course the risks may be a bit higher this way but the returns are sweeter. So don't take the easy way out - learn to wage the severest fight in the first corner. This book will help you to implement this strategy.