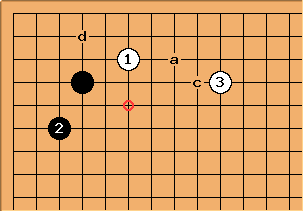 It is seen in a number of fuseki, particularly the Kobayashi Fuseki and in modern go with white threatening to build a moyo on the top.

, this joseki is settled and it is an even result.

Professional players typically leave this position alone and tenuki until the middle game, during which Black may attempt invasions and reductions. White has a large follow-up with a one-space jump at the circle marked point.