Question about avoiding the taisha

White avoids the taisha[2] but jumps too early

In problem 58 of Get Strong at Joseki 2, a taisha-avoidance joseki is shown: 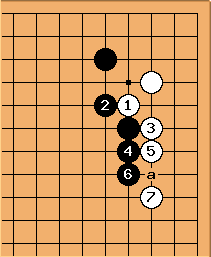 A joseki for White for avoiding the taisha is to play

However, the jump to

is a mistake and should have been played solidly at a (and if Black pushes again, then White can jump).

The question posed is how Black should suitably punish White for this mistake.

If you'd like to think about it before seeing the answer, please do that now.

If you feel clueless, here's a clue. Black starts playing atari on the

stone. Care to go back and try to read some follow-up moves before looking at the answer ? 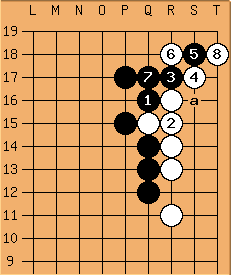 According to the book, Black should play atari with

, then hane, and if White counter-hanes, Black plays nidan-bane, giving way once if White plays atari with

(White should just play nice-doggie at a instead of

Black is about to push through and cut.

Care to think about which side Black will cut on, the "inside" or "outside"?[1] 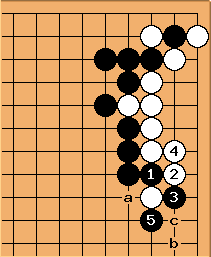 ... Black pushes through and cuts on the "outside" with

and White protects with

Finally, Black captures the outside white stone in a ladder with

Here are questions left unexplained in the book:

is still wrong. Black probably should play as in this diagram, and after white a defend at b. Alternatively, black could decide not to play the atari at

, and extend at c instead. I don't know which is better. - Andre Engels

Cf. cut the side you don't want.