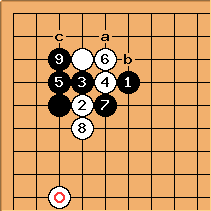 , White's options include the descent of a and the push at b: see "Descent variations" and "Push variations" sections below. The play at c is a classical joseki.

is currently often played at 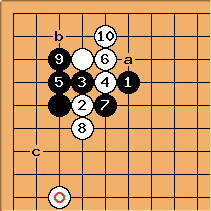 At least two non-trick-move continuations have been worked out with the three-space low pincer.

One begins with Black b, the other with c; each is shown below. 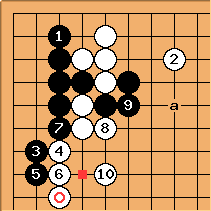 Black has sente, but his center stones are heavy.

Charles The recent games I've seen all have

at the squared point.

A black play in the direction of a might be urgent. This continuation appears in Whole Board Thinking In Joseki, as does a similar one in Ishida's Joseki Dictionary. 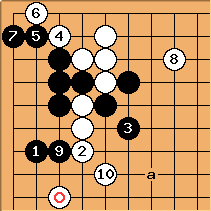 Black finishes with a and achieves a much lighter shape than in continuation 1 above.

At the same time, White has less definitive eye shape on the outside. The cost of these advantages for Black is a loss of some corner territory. Perhaps this makes continuation 2 the better choice, in general. This continuation appears in Ishida's Joseki Dictionary. 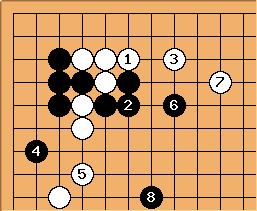 This is the main line variation where