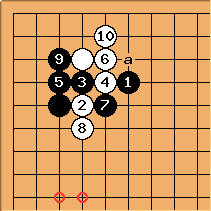 can also be played without a white stone at one of the circled points, though it is not common. Note that the Taisha is not to be recommended when there is a white stone closer to the corner than the marked points. The result is too good for White in such cases. 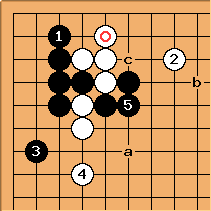 This continuation appears in NieWeipingOnGo.

creates a target for White so something lighter might be worth considering. White can begin the attack on the Black center stones with a or b.

Notice that in the "normal" Taisha continuation (shown above), White c is exchanged for

. In this descent variation, instead

. Thus, with respect to the center attack, White has gained a tempo. At the expense of solidifying Black's corner, White gets to initiate the attack on Black's center stones. Locally, this seems to be the main difference between this variation and the more common one.