I came accross 9 as an unconventional continuation of one of the classic taisha branches. A quick search of professional games revealed that this move is never played (should be a), therefore it must be wrong. How to best take advantage of this inferior move? I descended to b; other ideas? 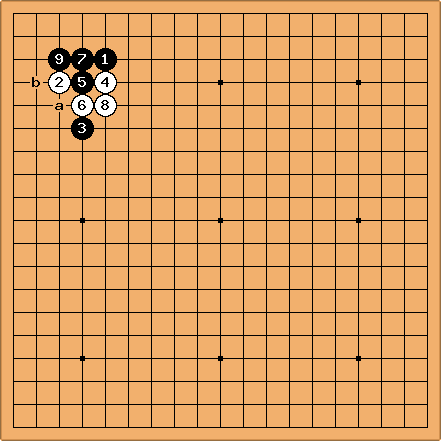 unkx80: My own instinct tells me that

at a shouldn't be too bad - the

stone gets separated in a split shape.

in my answer, thought

is the deviation we are talking about (WaysToAvoidTheTaisha#toc4). Anything but a leaves forcing moves for Black, that White will answer at ''a', so playing there directly seems like the way to go.

Dieter: Although you can always lie with tewari there is only one really strange move in this sequence and it is

. White is extremely happy to connect at a.

can be criticized, but is not nearly as bad as

Bill: In this position it is as though Black not only peeped at a bamboo joint but then tried to cut it.

Dave This position has nothing to with tewari since the order of play does not affect or explain the result. As Bill noted the final result is that Black has both peeped at a bamboo joint from both sides, but also tried to cut it. Simply connect at the marked stone, mark this Better for White, and get on with life! After the game enjoy chastising Black for his ignorance of both joseki and good shape. :-)

John F. While agreeing that sledgehammers and nuts come to mind, this is a wiki that people use for reference rather than a comedy forum, so let us be clear that this a perfect example of tewari. There are two basic methods of tewari and move order is only one of them. The other involves looking at the final shape (i.e. the result) for redundancies, silly shapes. As it happens, both techniques seem to apply here.