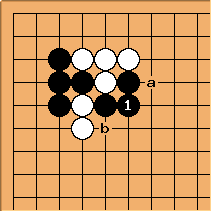 This page deals with the standard pattern, following the complex variation of the taisha joseki (also known as taisha tobitsuke), where

makes a solid connection. The other two major patterns are a, taisha nobi 1 and b taisha nobi 2. 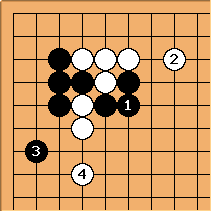 This is the most common development, after a while the groups in the center develop shape. 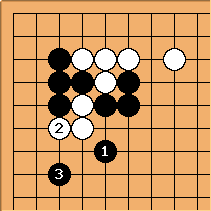 Black 1 here has been played by some top players down the years (Shusai, Sekiyama Riichi, Hashimoto Utaro). The line continues with

, and is thoroughly analysed in Ishida. 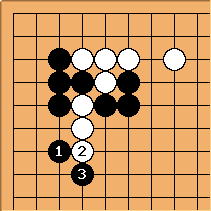 here is a pro play, though perhaps not recently (any advance on Kubomatsu-Kitani in 1934?) This is a pushing battle with a hamete in it. Black

may look as if it's easy to refute - but beware the two-stone edge squeeze! 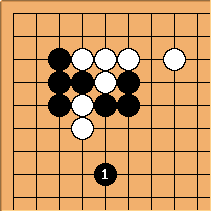 This idea appeared in a couple of Go Seigen's games in the 1930s. 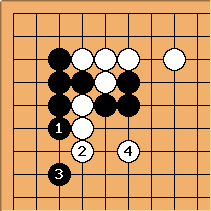 , not mentioned in Ishida, were played by Shuwa. 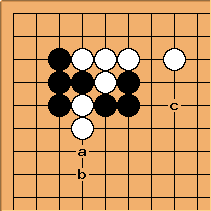 That leaves these plays a and b from Ishida unaccounted for; they may be outright tricks. Analysis is given there for a; for b too but that was played differently 1974-06-06 by Hashimoto Utaro against Magari Reiki (game on Gobase).

Gobase also has a game 1973-10-31 between 1 dan pros Inoue Hatsue and Kimura Yoshio in which Black tries c.